I had some use it or lose it PTO to take before the end of August, so I wanted to use this day for some time in the mountains before the end of summer.  I had originally considered running the Aspen 4 Pass loop (have hiked it before, but never have run it), but could not justify the time in the car.  I kicked around a few other ideas such as the Pawnee/Buchanan Loop, Longs/Meeker, but I ultimately decided it would be fun to get in a few new summits, staying close to home and relatively short so that I could spend the second half of the day with the family.

A few days prior, I sent out a few invites to friends with Mondays off or had flexible schedules and David Ponak immediately signed on.  A check of the weather the night before had me quite discouraged, calling for snow and rain in the morning, changing over to all rain and lightning by noon.  With kids and a busy schedule, I have very little flexibility and so few days in the mountains for such adventures (I planned  this day off  6 weeks in advance), I was a bit peeved that this one day I had off was looking to be a wash, sandwiched by seemingly sunny nice days.

Oh well, having faced this scenario many times before, I hoped for the best, yet prepared for the worst and met David in N. Boulder at 5:30am.  It was too dark to really get a feel for the weather, but it was in the mid 70's when I left home at 5am and obvious that it was cloudy.  A few miles from Allenspark, it began to rain, somewhat hard for a bit and I was regretting my decision, but David helped me keep optimistic.

Fortunately, the rain stopped by the time we arrived at the trailhead and surprisingly, it was completely dry (though still overcast and somewhat threatening).  It took me a while to decide what to wear/pack, not being sure which way the weather was going to go, so to be on the safe side, I added a hooded running shirt and my bomber (but heavy) waterproof shell to my pack for good measure.  The temperature was actually quite reasonable and perfect for running and we were on the trail at 6:41am.

We were moving along at a moderate conversational running pace, which made the initial miles pass quickly.  The trail is really buffed out and well maintained, with the only very minor glitch being the new under construction bridge at Ouzel Falls.  Though closed, it was early enough in the morning and the bridge was completed enough to cross with no issues (though on the return, they were working on the bridge for the anticipated mid-Sept. completion date, so we had to bypass on some logs and rocks just upstream, but not an issue since the creek is quite low).

I was surprised to see some aspen trees already fully changed to yellow, not too many, but still a bit early and a reminder that Autumn is quickly arriving in the high country. 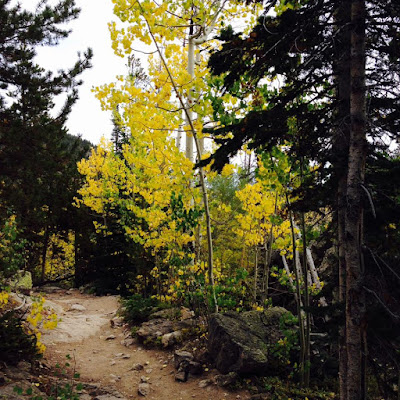 As we neared Bluebird Lake, the wind began to pick up and with the cloudy skies, was getting a bit cold, so we made a short stop to add a layer.  We arrived at Bluebird Lake shortly after this stop after 1:27 of running. 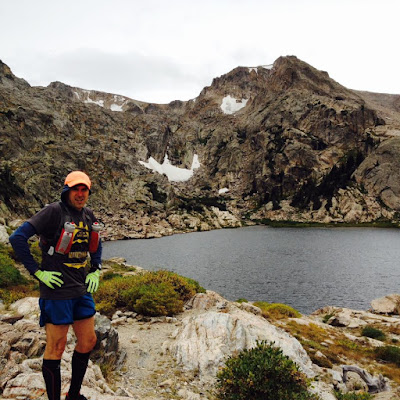 At Bluebird Lake.  All photos by David Ponak.

From here, we transitioned into casual hiking mode, negotiating a miniature, but somewhat steep rocky box canyon to cross to the other side of Ouzel Creek, which was a hidden surprise (but not difficult).

There were some cairns to follow above and on the North side of Bluebird Lake, but soon dead ended us into deep willows and massive boulders.  We slowly and carefully wormed our way through the maze, but if I had to do it over again, would have stuck closer to the lake shore as it would have been much easier walking.
Next was a series of benches, lakes and terraces, each of which held scenic surprises.  The walking here was easy and generally wide open, any willows and marshes were easy enough to bypass or negotiate.  On the steeper slopes up to Isolation Lake, we were quite surprised to see a party of 3 paralleling us to the right and we waved to one another. 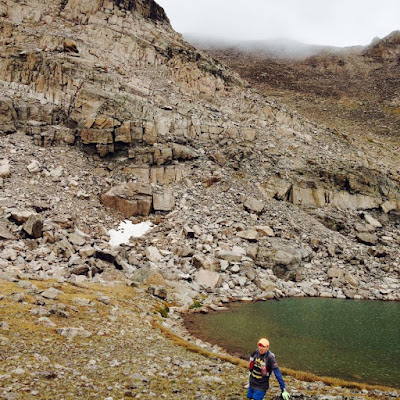 From Isolation Lake, we caught brief glimpses through the clouds of what we assumed to be the reclusive summit of our first objective, Isolation Peak, which seemed a bit discouragingly high and far away.  The gradient from here was steep, unrelenting and somewhat loose at times, but we were able to piece together enough grass and solid rock that it went easier than expected and we were on the summit about a half hour later (2:48 elapsed).  The summit is small and the ridge leading to it, though easy with solid rock, has some dramatic exposure to the N/NW, which was enhanced by the swirling clouds. 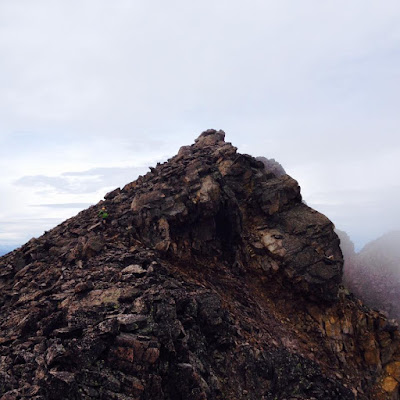 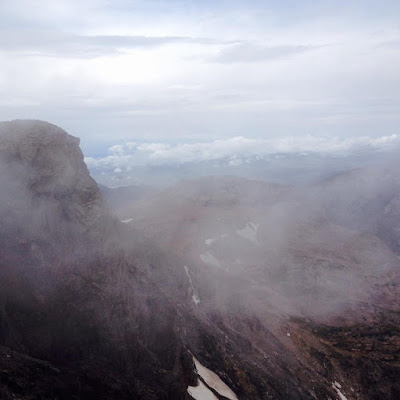 We backtracked our ascent route and though somewhat loose in spots, the upper section of the slopes we had to descend to the Mahana/Isolation saddle were no problem, though we went extra slow and cautious, since the party of hikers we saw earlier were now ascending directly below us, yet out of sight.  Once beyond, it was fun, solid boulder hopping to the saddle, then an easy and short jaunt to the summit of Mahana. 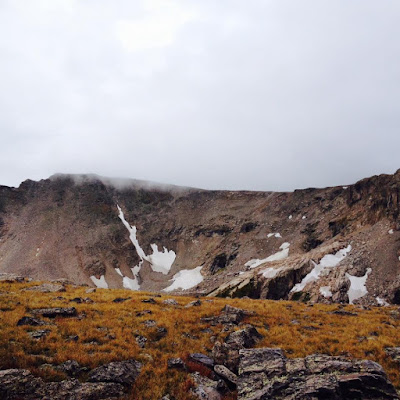 The tundra is changing.

After a longer break on top, we debated backtracking to Isolation Lake, or exploring the long, but wide, grassy mellow East Ridge of Mahana, deciding on the latter.  The upper 2/3 of the descent allowed for intermittent easy jogging, but as we neared treeline, it was evident returning to the trail would not be a slam dunk, as there was a ridiculous amount of deadfall from the Ouzel fire that ravaged the area in 1978.  In retrospect, we should have continued along the ridge further, but with all the rotten fallen trees to negotiate, we were anxious to get on the trail, so made a beeline for it just above Ouzel Lake.  Though it looked close, the slope was longer, steeper and looser than it first appeared and negotiating the fallen trees on a loose ~25 degree slope was a bit more difficult than it appeared from above.  This section was really slow and somewhat tedious.

After what seemed like forever, we were back on the trail and though it was still another ~5 miles back to the car, I felt really fresh and relieved to be back on cruiser terrain.  It was a quick and easy run out, finishing at 12:10pm, with the sun actually making an appearance toward the end.


Though the weather was overcast, it was never really threatening and it turned out to be a great day in the mountains.  It helped that it was a Monday with a poor forecast, but we only saw 3 people on the mountain and then some smaller groups on the way out within a few miles of the trailhead.  It had been 7 years since I had last visited the Wild Basin section of the park, but a reminder that I need to go back again soon.  It is an amazing area with seemingly endless possibilities.
Posted by Jeff Valliere at 8:13 AM