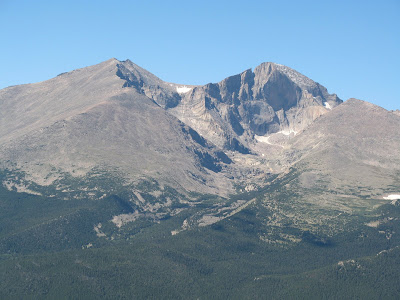 Twin Sisters Peaks, RMNP
NE summit 11428'
NW summit 11413'
S summit 11376'
TH: ~9000',
Twin Sisters Trail/Lily Lake Visitors Center
approx 9 miles, 3400' gain
After a slothful day yesterday (we wanted to get out, but the smoke was too bad..... cough cough), Allison and I decided to get out and do something somewhat close and not too committing.
I was a little stumped to not see any signs for the TH where it should have been. As soon as I started to really wonder, I saw a sign "Twin Sisters TH 1.6 miles". That is odd, I must have a pretty old map, as all the maps show the TH just North of the Longs Peak TH, not Lily Lake.
Anyways, we easily found the parking lot where they do not allow parking and then parked a bit down the road in line with 20 other cars. Funny stuff.
We started up the trail at 10am and casually strolled the endless switchbacks in the cool morning air. Back and forth, forth and back I was not sure where this trail was taking us! Anything but up it seemed. Eventually the views started to open up and we had great views of Longs and we could start to verify that we were indeed gaining altitude.
After passing nearly 20 people of all shapes and sizes, we topped out on the crowded NW summit at 11:15am, then cruised over to the NE summit for some solitude. After a bit of a break, we decided that we had to head to the S. summit to cover all of our bases. On the way there, we mostly stuck to the ridge down to the saddle and enjoyed some really fun class 3 scrambling on surprisingly grippy metamorphic rock (anyone have the scoop on the geology of this peak?). Going up to the S. summit, there was a great fin of rock that offered some very enjoyable and non-committal class 3 scrambling and it took us 25 additional minutes to traverse between the two summits going easy. We took a huge break here, taking in the views and split when 3 guys arrived, way too crowded!
On the way off the summit block, Allison really bonked her noggin on an over hanging rock. Knocked her senseless and she had to sit for a while to regain her composure. Maybe we should just start wearing helmets on all hikes harder than class 1 from now on!
On the way down, we were getting dizzy from all the switchbacks. I was on a mission for us to make it down faster than we got up (without running) and we really had to focus to pull this off, as it seems pretty much equal effort both ways. We were able to pull the descent off in 1hr (15 minutes faster than the up), without running one step. 4hrs RT, a sweet little walk in the "park".
Posted by Jeff Valliere at 7:38 PM