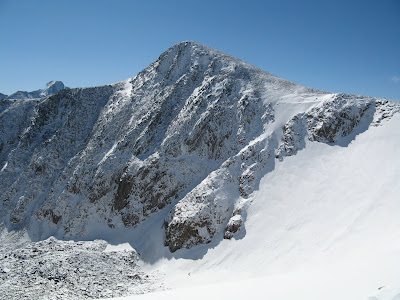 Where oh where did summer disappear to? That is what we were asking ourselves on Flattop on Saturday as we intended to do something short, close to home, mellow and super easy but mother nature had other plans. As we were leaving the house, we were surprised to see how white the Indian Peaks were, but did not think too much of it, as we were taking an easy trail to only 12,324 (should have gone back home for boots/gaiters, balaclava/goggles).

We started up the trail at 8:15am from Bear Lake. It was a bit cool, but otherwise a gorgeous day. We quickly warmed up, and before long, we were walking on a snow and ice covered trail, but it was really no biggie and kind of fun actually. At tree line, the depth of the snow was increasing, as was the wind and soon we were in a full on raging ground blizzard, it really felt like full on winter. The going was slow as we tried to stay upright in the unconsolidated, and often times knee deep snow. Too bad we could not have brought the dog, at least she would be enjoying this.

The trail was only discernable by following the large cairns, but we were often times off of it, trying to find patches of less deep snow. Each step was a complete mystery and we never knew what we were going to step on or in. We made the uneventful summit after 2 hours and beat a hasty retreat. On the way down, going as cautious and slow as I could, I still managed to sink my leg into a deep hole and really smash my shin, probably the worst since my BMX/bear trap pedal days, OUCH!

Fortunately, the descent was a bit easier with the wind at our backs and once back in the trees, it turned out to be an amazing fall day and warmed quickly and dramatically. The leaves are really slow to change this year, and there was nary a hint of yellow anywhere. I slept in the car all the way back to Lyons and awoke to people riding bikes every where I looked, a stark contrast from winter in a seeming instant.