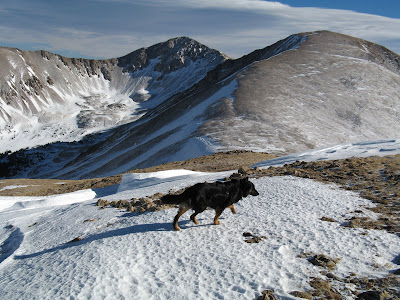 Woke up around 7am without a plan, but Allison and I were itching to get up high. Where to go with the least amount of wind? Good question. I have been wanting to get up Woods Mountain for a while, as I have always passed it by on previous trips to Parnassus, so Woods fits the bill perfectly today, as it is close, non committing and there is little if any avy risk. We packed up quick and got out the door by 8:10, then battled…. of all things…. SKI TRAFFIC! What? On a Thursday after the big holiday vacation? Whooda thought?

After a slow drive and a slower prep in the car (the wind was howling, so I think we were both procrastinating a bit), we were on the trail by 10:03am. The first short stretch to the junction had been travelled recently, but beyond that, I had to break trail to treeline. At first it was consolidated underneath, but eventually, following the old track became difficult, yet fortunately most of the new snow had blown away.The temperature was balmy and snow was balling under our snowshoes from the start, but to compensate, the wind was whipping spindrift in our faces a bit as we entered the valley below Parnassus. We took a leisurely ½ hour lunch break in the shelter of a nice stand of trees before we began the tundra walk to the summit, as I was determined not to bonk again like last Sunday on Democrat. I added my warm layers and such while conditions were tolerable, but wouldn’t you know the wind subsided as we broke treeline and I had to go super slow as to not overheat.

We continued upward at a leisurely pace to the summit of Woods and our exposure to the wind increased significantly and I was finally glad to have those layers on. We hung out for a while enjoying the views as it was not too cold and we were in no hurry. On the way back down to the saddle, I proposed heading up Parnassus for kicks and surprisingly Allison bit.

The trip up Parnassus went by quick, yet the wind was reaching ferocious speeds, tossing us around like rag dolls at times. The summit, as is often times the case, was less windy than the ascent and we enjoyed another nice break. The stroll back to the car was easy and uneventful as we lingered from time to time, soaking in such an awesome day. Finished at 3:55pm, just in time for a bit more ski traffic.
Posted by Jeff Valliere at 9:45 PM