Allison came home from the hospital on Monday, but was still on bed rest which meant no running for me on the days that I had to work. With the Fourmile Fire in Boulder emitting massive amounts of smoke throughout the area Mon-Weds, I would not have run anyways, so it helped ease the temptation quite a bit. Once the smoke cleared and I had a bit more time to play with, I took full advantage (as much as I could squeeze in anyways) and ended up having a great few days of running with great friends and Sierra.  Each day, as impending fatherhood and the Fall/Winter season approach, I realize how fortunate I am to be able to get out on such great trails, get in an awesome workout and share it with great friends.  I am truly thankful.

Green Mountain: Up Gregory/Ranger, down front/NE ridge with Sierra and my friend Joe who I have known since the 6th grade. Joe played a huge part in my decision to move to Colorado back in 1996 and we have shared quite a few good times and adventures together over the past ~27 years.  We both were silently aware that this was probably our last hike for quite some time, as he is moving to Quebec to live with his new wife Heather.  I was content taking it super easy, just enjoying the cool morning, fresh air and great conversation. We bumped into Tony near the summit and chatted with him for a bit, then spent a while on the summit checking out what little was left of the fire. 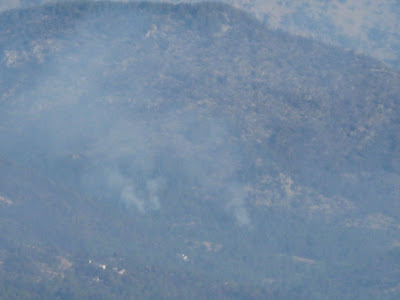 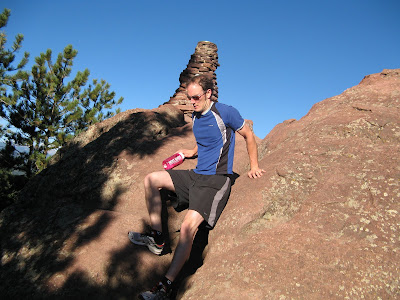 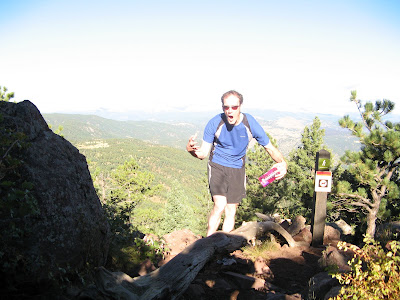 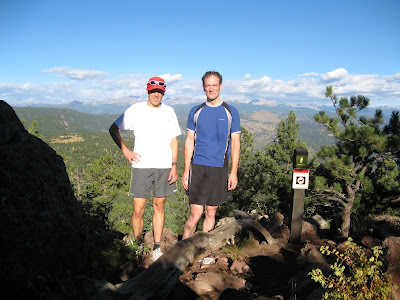 Lap 1: Dave Mackey was visiting town for a bit and we planned to meet up at Chautauqua for a 7am run up Green. Unfortunately, his phone alarm malfunctioned and he overslept and was unable to make it, but fortunately GZ and Tony showed. We headed up Gregory/Long Canyon/W. Ridge at a conversational pace, chatting it up quite a bit, mostly about running of course, but occasionally other topics would come up like the fire and having twins. I think I had 57 minutes for the ascent from Chautauqua. We spent a long time on the summit, just enjoying. Tony decided to head over to Bear, while George and I headed down the front. We bumped into Dave on Amphi, where he joined us back to Chautauqua.

Lap 2: After a gel and some water, Dave and I headed back up via the 1st Flatiron access trail, then up NE ridge to the summit. 48 or 49 minutes I think, but I did not really pay any attention to the watch all day. After another long and enjoyable break on the summit, we headed down Ranger/Gregory. It was great catching up with Dave and I miss having him around to run with.

After spending the morning having breakfast with Allison and helping her out some (she is back at the hospital and will be there until the twins arrive), I headed home, rounded up Sierra and headed over to the S. Mesa TH. There was a sign immediately warning of rattlesnakes on the trail, but what trail(s)? There are often times signs posted warning of bears, lions, snakes etc…. but I never see them. Well, almost never. ~1/4 of the way up Shadow Canyon, I heard an odd, but unsettling noise that instantaneously threw up the red flag. At first is sounded like some sort of hiss, but a quick glance down to my left revealed a ~4 foot rattlesnake, 1 foot away on the side of the trail in strike position. My primal instincts kicked in and I jumped back with a massive surge of adrenaline and yelled at Sierra to stop. I was surprised by the sound of my shaky voice. I put her on leash and wrapped it around my hand tightly, only giving her about 1’ of slack. This was my first up close encounter on the trails with a rattlesnake and though I was initially scared shitless, my fear quickly morphed into fascination.  The snake took it’s sweet time on the trail and I eventually became impatient and wanted to extract Sierra and I from the situation. From a safe distance, I tossed a few very small pebbles at it, just to get it moving, which worked, but not before some rattling and posturing. We made SoBo in a very pokey 1:12 after lots of water stops, backtracking to wait on Sierra and the rattlesnake delay with subsequent storytelling and warning fellow hikers. It was an amazing day, so we spent ~10 minutes on each summit before heading back. 2:30 for the RT.

Green Mountain with Brandon, up Gregory/Ranger at a mellow pace, then down the front going easy.  I paused at the NE ridge cutoff and presented the option of heading down to the 1st Flatiron route, but Brandon let out a big sigh which I took as a no.  Halfway down I got a call to fetch a prescription from the soon to close Walgreens and had to pick up the pace a bit.  41:03 up, ??:?? down.  It was pretty warm still and I am almost ready for cooler days (slightly cooler).

Unrelated to running, but I got a kick out of the BonerTron EX-100 on the wall in the hospital rooms. 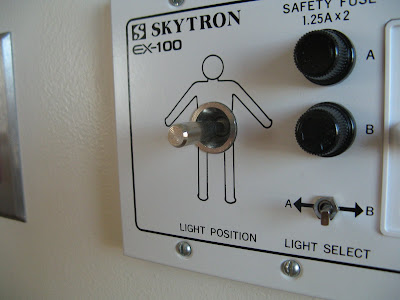 Posted by Jeff Valliere at 9:30 PM