To celebrate the girls 4 month birthday, Isabelle won the coin toss and got to join me for her first trip up Green Mountain.  Started a little after 10am and bumped into Tony at the Gregory lot and chatted with him for a bit.  Headed up the mostly dry Gregory Canyon, threw on the spikes at the top, as I knew from my run the previous day with Dave that it would be snow/ice most of the way to the summit (not easy to install the Microspikes with a baby on the front).  It was not nearly as warm as the previous day where the temp approached 70 degrees, but it was still very pleasant, maybe low to mid 50s (very calm and warmish feeling though) and I quickly felt like we were over dressed.

We made good progress despite the snow/ice/added weight and were soon on the summit.  I carefully negotiated the summit boulder, where Isabelle awoke just in time to check out the spectacular views of the Indian Peaks/Continental Divide and pointed out to her some of the different peaks that she and her sister will be climbing before long.

Isabelle slept most of the trip up, but was awake for a good part of the descent, so I continued to point out things along the way like rocks, trees, snow, doggys, etc... and just sang and talked quite a bit which she seemed to enjoy.  Back in Gregory Canyon, we ran into Dave and Travis and chatted with them for a few minutes.

It was great to introduce Isabelle to Green Mountain and a few of my friends along the way.  I had an awesome time with her and I know she enjoyed it too, as she either napped quietly, or stared wide eyed with her big blue eyes taking in her big new World.  When I put her in her car seat back at the van, I expected her to fuss, but instead, she just gave me a big smile and was content for the rest of the day. 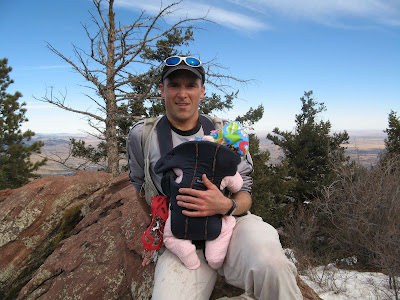 Posted by Jeff Valliere at 6:38 AM