Just figured I would write a short wrap up since this past weekend.  Not much going on in the way of running, as I have been sick since last Thursday.  I entirely blame myself, as I thought smugly to myself the day before I got sick, that it was pretty amazing that I did not catch the sickness the girls have been passing back and forth to one another for the previous ~2 weeks.  I try to catch myself when such things cross my mind, as it is almost like I have a 6th sense, or premonitions of sorts.  Thoughts or statements, such as 'have not been sick in a long time', 'have not had a flat tire in a long time', 'car is running great', 'have not crashed my bike in a long time', etc...., have always had a way of coming to fruition.  Though I rarely, if ever, buy into superstitious beliefs, I do however get a bit superstitious about these topics and try to cut myself off if they ever enter my mind, much less discuss such matters.

It started off with some funny throat phlegm thing that crept up on me Thursday, but I tried to pass it off as a consequence of running the previous day when the air quality was noticeably poor (visible inversion with brown smog).

Friday morning:  I felt OK, though was still in a bit of denial and ran Green easy with Sierra and felt reasonably well.

Saturday:  ran 2 miles with the dog and baby jogger, but energy was somewhat low and it was freezing cold.  Those 2 miles were not the least bit fun and I regretted even going outside.  Even wearing warmer gloves, my hands were like wooden claws and I could hardly get back into the house and they stung as I warmed them.  Sheesh, I have gotten a bit soft with the mild Winter (mild until Feb. that is).

Off.  Running was not even remotely an option.  It crossed my mind, but I laughed at the absurdity of it.  Functioning at the most basic level was all I could do as my energy was very low and it felt like my head was in a vice.

Felt a little better, but still was really low on energy and my nose was running like a faucet, along with a deep cough.  Got out for a walk at lunch time, 2 miles round trip to Target.

Felt like I could have jogged for an easy few miles, but opted to just get out for a short walk at lunch (1 mile) instead, as I was way too busy at work and had to be home in a timely manner for early Valentines dinner reservations.  I did not worry about it though, as running on any of these days, would only be to say that I ran and would do more harm than good.


With grandparents watching babies, I could not pass up a hike with Allison and Sierra.  I was hoping to hike Green, but we were short on time after running a bunch of errands, so settled on Sanitas.  I let Allison set the pace and just followed her, hacking every now and then, but felt OK while moving.  My legs felt good and if I were alone, I might have pushed, but by the end I was glad I did not, as I could barely keep up with her and then had a wheezing fit on the summit.  Walked down easy, doing my best to not die on the ice (I gave my Microspikes to Allison, who decided at the car that she would not need any).

Slept better the previous night than any night in a long time and woke up feeling like I had just about all of my energy back, but the runny nose, cough and lung funk were all still there.

Headed to Boulder for a lap on Green in the afternoon with the intent to just play it by ear depending on how I felt.  Though it felt like I was breathing through a snorkel half filled with water, my legs and energy were top notch and I ended up running the whole ascent, albeit at what felt like a very conservative pace.  I felt like I could have gone a few minutes faster than my 36:28, even with the lung thing, but figured there was no sense making a mess of myself.  Even as it was, I had a major wheezing fit on the summit, as I tried to chat with another runner who was visiting Green for the first time, asking for directions and trail advice.  Much of my efficiency was simply a result of the incredibly smooth and consistent snow conditions right now, as there are hardly any large step ups (a few on Amphi), but otherwise is like a paved sidewalk.

Tempted by the perfect conditions, I pushed a little harder on the descent to see if I could break my ~17:30 PR from a few weeks ago.  I eased into it, not going all out, but definitely pushed when I could and backed off a bit when necessary (the short "flat" sections/rollers I did not push).  I just sort of let it flow and never looked at the watch (I don't really dare to when running fast downhill).

I figured I would break 17, but was really surprised to see 15:48 when I stepped into the Gregory lot.  Still slower than Homie by a few handfuls of seconds and a far cry from Tony's FKT of low 14 (done in FAR worse conditions no less), but I was happy with the improvement all things considered.

I still think I can carve some time off of this descent PR once my sickness completely passes, or at least I plan to give it another shot as long as conditions hold.

Additionally, I also walked a total of 4.5 miles over 3 walks throughout the day (dog walk, Davidson Mesa walk to go see horses with the family, and a late afternoon neighborhood walk with the family).  For those who might be interested in Davidson Mesa, conditions are still terrible, several inches of compacted snow and ice.  Does not look like it will be clearing out any time soon. 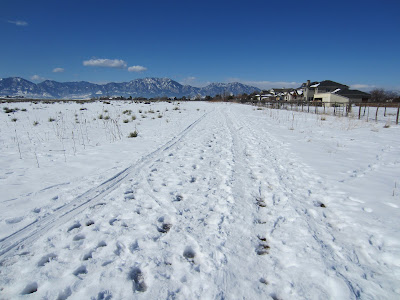 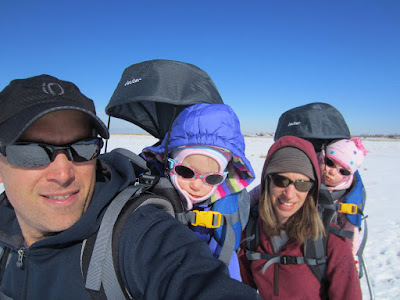