I had been eagerly anticipating this stage of the race since the route for the US Pro Cycling Challenge was announced way back last Winter. I was looking forward to making a day of it, following the race and spectating/cheering from several different spots before joining the raucous party up on Flagstaff Mountain with all my friends. My sister even planned to fly out and join me. As August approached however, I realized that making a day of it would be out of the question with all that we have to do to get into our new house by the end of the month. I thus resigned to zipping into town, biking/running up Flag, meeting a few friends and just watching them cruise up the hill, being part of a Tour de France quality crowd.

After some unanticipated delays at home, I hurried into Boulder a bit after 3pm, having received a few discouraging updates as to the location of the front of the race, but I pressed on hoping I might just make it.

Parked near 27th/Broadway in a neighborhood, pulled my bike out of the trunk ready to speed off up the hill and lo and behold, a flat tire! Seriously?  WTF?  AWESOME timing. I threw my bike back in the car and took off on foot in a full on sprint up Baseline. I could see the helicopter hovering and tried to convince myself that they were just shooting from afar or previewing the crowds. Soon though, I noticed people biking and walking down the hill, but continued on in a state of pissed off denial. I asked somebody (full well knowing the answer) and they confirmed that I was about 5-10 minutes too late.

I still pressed on at an angry intensity, got onto the course and was able to watch the final 6 stragglers being chased by the broom wagon just below Chautauqua. They got a good gap on me through this flat secton, but once I hit the Flagstaff Trail, I started to catch back up and could always hear the crowds/see the support cars going by just one switchback above. Going up the hill was difficult, fighting my way past all the down traffic, but I was very determined to salvage my day in some way, so I jumped on a climbing access trail between the 3rd and 4th road crossing. The surprisingly well travelled trail, soon climbed straight up the fall line to the Amphitheater (16 minute split from the base), where had to hop an orange fence and I quickly got crabbed at by a few guys telling me that it was not a trail, or that it was closed or something to that affect. I smiled, thanked them and told them that I was fine (it really was a great trail that I need to keep in mind). Had I arrived 10 minutes later, I would have been on TV, right behind Levi Leipheimer and Rory Sutherland.

I took a few minutes walking around, taking some pictures and looking for friends. I got a call from Dave who was up on Green, so I ran over to meet him on the Ranger Trail before hitting the summit. Turned out to be a longer and harder run than I expected (first run since Pikes) the whole time I had a sinking sense of disappointment that I missed out on all of the excitement, especially after coming so close and trying so hard.  Better luck next year.

Levi, the new race leader (for a day).  That is my friend Dave Towle under his arm pit. 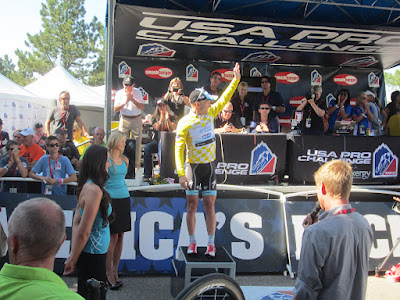 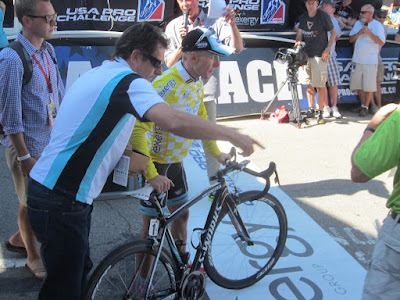 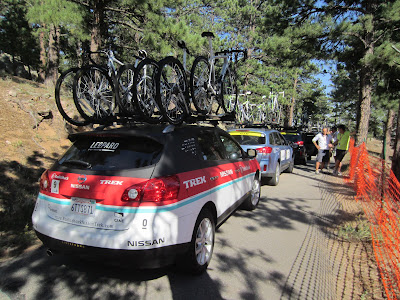 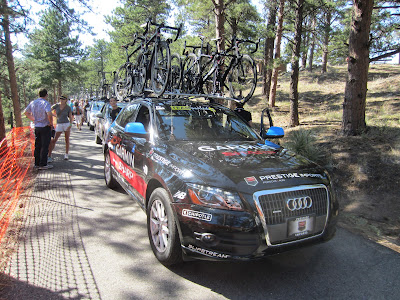 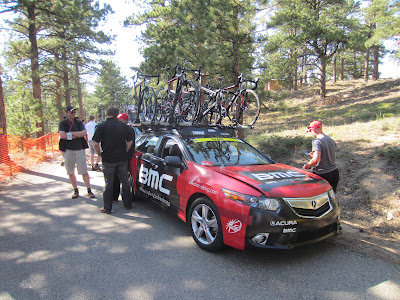 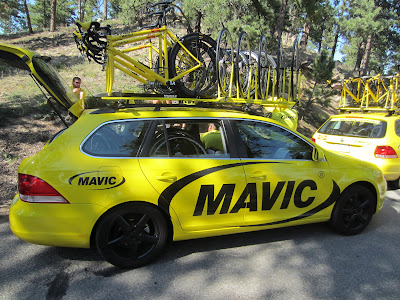 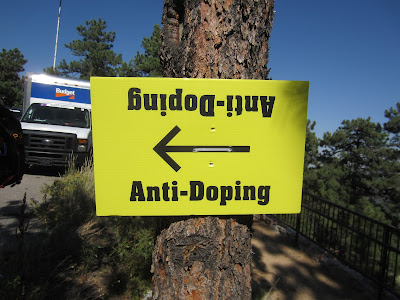 10 minutes sooner and I would have literally popped up behind this press conference like a jack in the box. 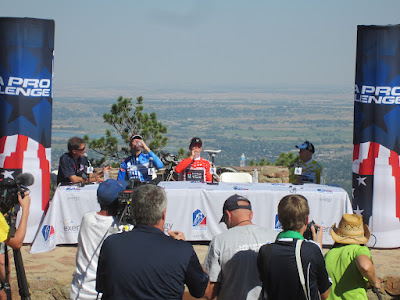 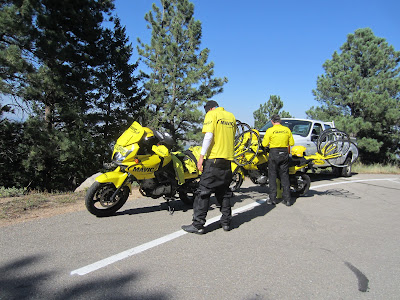 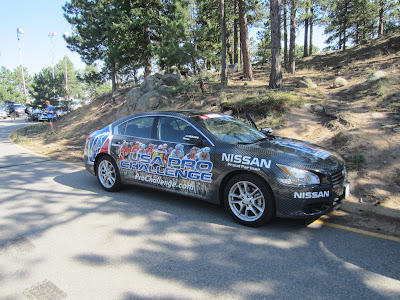 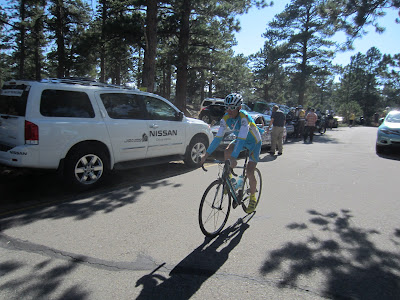 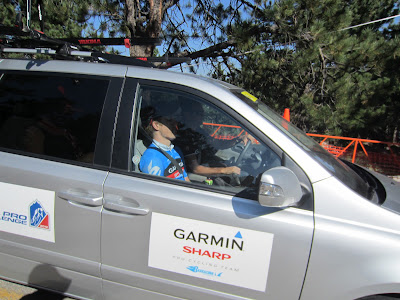 Posted by Jeff Valliere at 7:09 AM