Homie and I started from the Guanella Pass winter road closure at the Silver Dollar Lake Trailhead at 7:41am (which adds 3.5 miles for the round trip).  The temperature was 8 degrees and because of that, I opted to wear my warm winter boots instead of my Gore-Tex trail running shoes.  The problem with this however, is that my boots do not fit into my running snowshoes that I brought along on this day.  Having had remarkably good luck along Scott Gomer creek on prior trips to Gray Wolf and Bierstadt, I naively thought I might be OK without.  Little did I know how wrong I would be.

We made easy progress up the packed road to the pass and the temperature seemed quite comfortable for being in the single digits.  It helps when there is no wind, which is a rarity here.  Snow levels seemed generally minimal and once onto the trail for Bierstadt I was happy to find that the snow was packed reasonably well.  After crossing the creek, we followed the drainage toward Scott Gomer Gully and within a 100 feet or so, I knew I had made a bad mistake.  I kept pressing on while Homie geared up with his 30” snowshoes and he soon caught up to me and moved ahead breaking trail.  Sometimes I could stay on top, but without poles and the added weight of a winter pack, I was often sinking in knee deep and sometimes up to mid-thigh or worse.  I contemplated turning around and just hiking Bierstadt, but I knew Homie wanted Evans for a grid slot and I did not want to disappoint because of my poor planning.

Just moving though the sugary, unconsolidated snow had me close to being at my limit and the frequent extractions nearly did me in.  The effort was really making me sweat, despite not being overdressed and still being in the shade.  It was a real grovel fest, but we were making progress, albeit slowly.  We finally got to a point where we could start an ascending traverse of the south facing slopes on the north side of the drainage toward the gully, but the willows and snow were not much better.  Soon, we cleared the willows, but we were hardly any better off crossing talus fields with an unconsolidated layer of snow hiding many deep holes.  Once in the gully, the gradient increased, but the snow decreased, footing improved and I was feeling a bit better.  Above treeline, progress was easy, as the existing snow was fun to stroll across with Microspikes, or could be avoided entirely.

As we gained the long west ridge of Evans, I was starting to feel the fatigue of my willow wallow and not having been above treeline since Labor Day weekend.  Though the ridge is easy, my wobbly legs were not up to the task of the rock hopping required to move as efficiently as I normally would and I took my time through here, carefully picked my way through the rocks and snowfields.  The weather though was what saved the day for me.  We were comfortable in light layers and did not even need gloves, it was so warm, clear and calm.  It is rare to get days this nice in the summer, never mind December.  I commented how it felt like cheating, but Homie reminded me of all the days out there where we have suffered greatly, so this helps to balance things out.  We topped out around 12:50pm, much later than I had predicted, but was happy to get there regardless.  This was my 2nd  winter ascent of Evans (1st was by bike in January 2009) and my 31st overall ascent of Evans.  This also filled a grid slot for Homie and I.

We spent about 10 minutes on the summit, although I would  have liked to linger if it were not for the late-ish hour (bringing lights never even occurred to me) and I knew I was going to be late for a long planned and rare date night with my wife.  I again took it easy along the ridge, not feeling all that coordinated and Homie was gracious enough to wait on me.  The descent beyond was easy, the gully required care, but was not bad.  I was not at all excited about the return trip through the willows, but hoped that our morning trail breaking efforts, plus the addition of one other climber with snowshoes who made an attempt would lessen the effort, but it was not to be.  The warm day softened the snow enough that the trip out was even more difficult, especially with the cumulative fatigue setting in.  I had no choice but to just power through and was thankful for good fitness and endurance.  Being any less fit could have proved to be a predicament.

I was quite relieved once we intersected the well packed Bierstadt trail and I upped the pace, occasionally jogging to catch back up with Homie, finally making contact a few minutes from the pass.  We made it to the pass a little after 3:30pm, made some gear adjustments and then enjoyed the easy walking back down the road to the car, finishing at 4:13pm for a 8:32 round trip.  I had originally figured 5 hours, maybe 6 if we took our time, but having it take so long was a real surprise and all day, our progress always seemed to be out of sync with the watch.  Had I brought snowshoes, or there had been less snow in the willows, we certainly would have shaved some large chunks of time.

Though this ended up maybe being my hardest earned winter 14er, or any 14er for that matter, I had a great time and was quite satisfied with the accomplishment.  As always, spending the day in the mountains with Homie is a blast and he is a great (patient) partner to have along.

Starting to finally gain some elevation 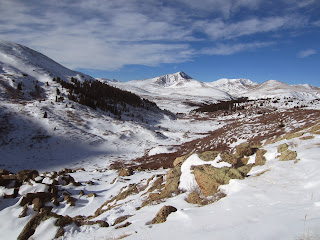 Homie changing his socks after dipping his foot in the creek.  It was so nice and warm here and the summit still seemed so far away, it was tempting to just call it a day here. 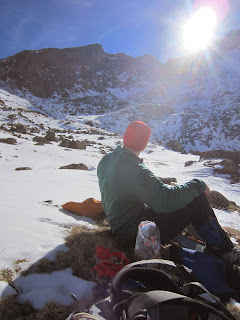 Homie on the summit. 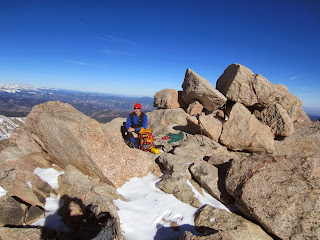 Looking back along the always longer than remembered West Ridge. 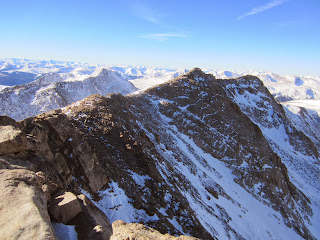 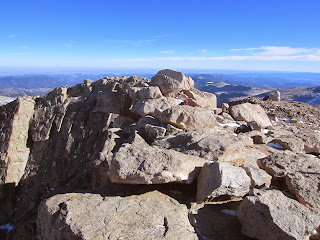 Days just do not get much better than this at 14k, any time of year. 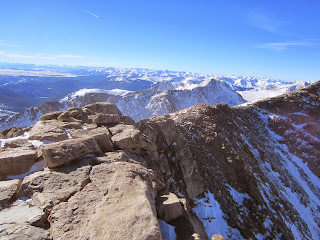 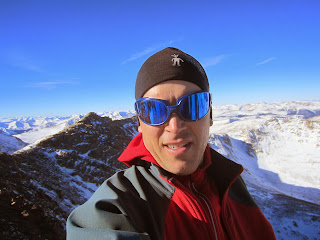 Putting Microspikes back on for the gully descent 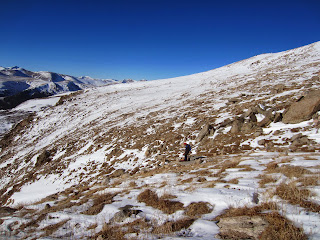 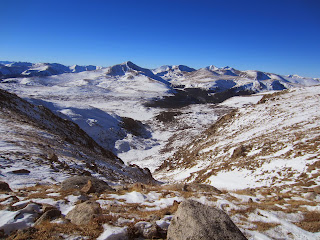 Posted by Jeff Valliere at 2:35 PM