Last week, we had a (very rare) few days without the kids and were able to get to the mountains for the first time this summer. 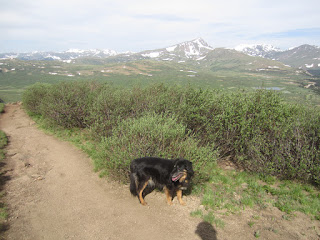 On Wednesday, Allison, Sierra and I headed up to hike Mt. Bierstadt, not too creative, but fit the bill perfectly, as we wanted something not too far away, nothing too long and something high.  It has been a few years since Sierra had climbed a 14er, partly because she is getting old (12), but mainly because we don't really hike 14ers all that much anymore.  It is very rare we all get a day together and when I go on my own, I am always running because I am taking advantage of very limited time to train at altitude (and just love to run in the mountains), have to hurry to get home on time and so basically just don't have time for hiking at what would be Sierra's pace. 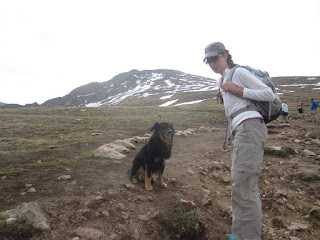 Sierra did surprisingly well though on Bierstadt and kept up easily at Allison's hiking pace on both the up and down.  There was plenty of water for her to drink because of snowmelt and she was able to frolic and roll in the remaining snowfields.  It was great to spend time up there with her after so long, as I was not sure I would ever share a 14er summit with her again.  It ended up taking us around 3.5 hours for the round trip (with a lengthy summit stay), then we lounged by the creek for quite some time cooling off, as it was quite warm and sunny still at 1pm.  Though I enjoyed the day very much, part of me was itching to run, which leads to the following day. 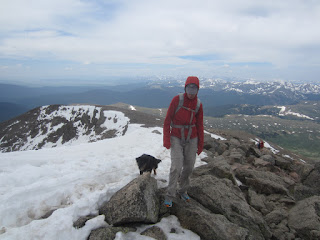 I got a free pass for the morning, as the girls were still at the grandparents and Allison was content doing other things.  Being my 44th birthday, I was eager to go push myself a bit to celebrate.  Having enjoyed Bierstadt so much the previous day, I headed back up to run it hard. 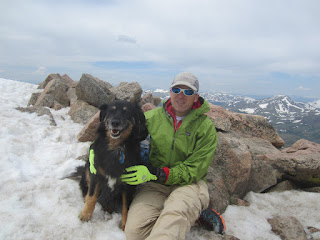 I put in a pretty solid effort, looking to see how close I could come to my July, 2006 PR of 55:49.  I made good time across the willows, making it to the creek in 5 minutes and change, but the water was flowing good and it was not the usual skip across, so I took my time to pick my way across the slippery and unstable logs and rocks.  Easily lost about 30 seconds here, but was soon moving well again.  Was able to run all but a few steps to the spot where the trail steepens on the way up to the ridge.  I looked at my watch and was a bit discouraged, thinking there was no way I would be close to PR, so I backed off the intensity a bit as I began powerhiking.  Before I knew it though, I was on the ridge and the numbers looked in my favor again, so I got back on the effort and hit the summit in 56:28.  I did not stop for the views, as I thoroughly enjoyed them the day before, so did an immediate u-turn and was skipping fast across the talus.  My feet were super accurate, my brain was focused and my North Face Ultra MT running shoes were hooking up perfect on everything I stepped on, wet rock, dry rock, steep snow, ice, slush, mud.  Everything was in perfect sync and felt like I was flying down the trail. 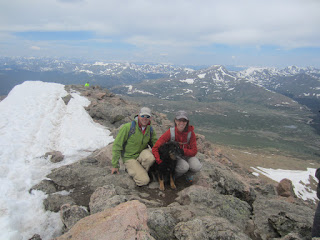 Many who I had passed on the way up and were now only slightly further up the trail, while I was now on my way down, which inspired many comments and cheers of encouragement as I zipped past.  I'll admit that this egged me on a bit to crank it just a little harder. 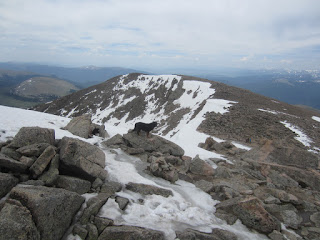 As I got down to the willows, I found myself lollygagging a bit for no apparent reason and kept having to remind myself to keep the effort up.  The creek crossing was a little easier in the opposite direction, much having to do with not caring about getting wet now.  I pushed hard on the last bit of uphill back to the parking lot, knowing that my goal of sub 1:30 car to car was a no go, but still wanted to keep it as close as I could.  Ended up at 1:32:58 for the 7.3 miles and 2,513 vertical.  Nothing spectacular, but I was really happy to be only 39 seconds off my 2006 ascent time (which I admit is soft, given I have never really worked on this route and it was POURING rain that day), especially since I am now 44 vs. 35, the creek crossing cost me a bit and I had not been above treeline since last August (where in 2006, I was above treeline weekly at least or multiple times weekly most of the year).  Not sure what my round trip PR was (something I never really recorded or paid attention to), but I know this was a RT PR by a handful or more minutes.  What does this all mean?  Absolutely nothing, I just had a really good day and was happy that at age 44, I could match my younger self.  I don't have these days nearly as often, but it keeps me hopeful that I can still push myself and compete with a younger me.  I know these days are fleeting and numbered, so they mean all the more. 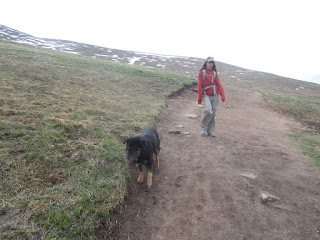 Once the adrenaline wore off, I felt like I should call it a day, but it was only 10:30am, the sky was clear and I had a few more precious hours, so I changed shoes and hat, packed a vest with gels and water and headed up Squaretop.  I knew within the first few steps it would be a slog, but I was really enjoying being out and just went with it.  The first two miles gained very little altitude, leaving about 2,000 feet of gain over the final mile.  Normally my favorite, but I was bogging a bit due to the earlier effort and just resigned to taking it easy.  2:18 for the round trip. 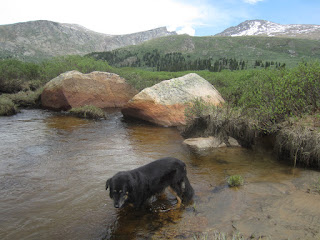 I am looking forward to the Barr Trail Mountain Race on July 19th and the Pikes Peak Marathon on August 16th (and they are approaching now at a startling rate).  "Training" (if you could even call it that) is going reasonably well, but I find summer to be the most difficult time of year to maintain or increase my fitness.  I can either get out really early in the morning (like at or before sunrise), but find myself stumbling in a tired daze at that hour and question if I am doing myself more harm than good.  Or, I get out after work and it is crazy hot and I am slogging in the heat.  Then there are all the factors related to the kids being out of school, unforeseen issues that come up at home, someone getting sick, etc...  I am lucky to get out 4 days per week and even that is somewhat of a forced miracle at times (though I do get out on the bike from time to time).  I guess I could get out more if I ran from home or work, but I just can't get into that sort of running, to me it is almost like a completely different sport and takes an unbelievable amount of mental energy to will myself along flat paths.  I guess I am just stubborn and addicted to the hills, Green Mountain or bust! 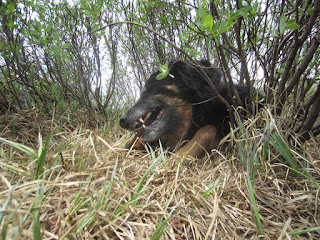 It's all good though, I am just happy that I am ABLE to run mountains when I can, even if not always on my own terms, I just have to be creative, flexible and constantly be adapting.

We'll be spending a few days in Keystone soon, so I hope to get in a few good runs there and take down a few Strava CRs (Jeff Kunkle!).  I am also really hoping to get up to Aspen for a 4 Pass loop in late July, as this has been on my list for quite some time and I have some vacation time to burn.  I have hiked it before in a very easy 10 hours with the wife, dog and friends, but would like to see how fast I can go on my own.  This is right up there with RRR (and much closer to home). 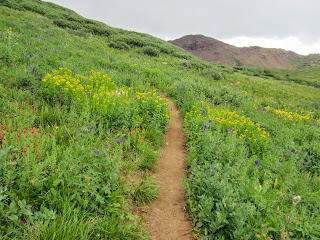 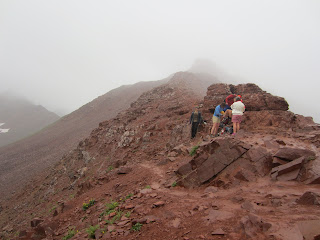