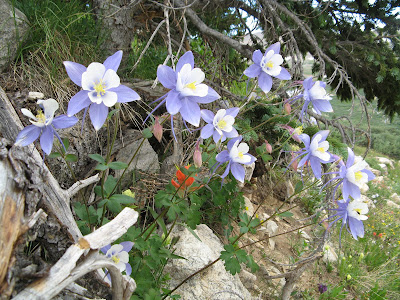 For a long time I have been meaning to get over to the Mosquito Pass area and stroll a few easy bicentennials. George has a cabin nearby and has been running up there for years and always raves about it, so Allison and I finally decided to have a look.

We parked a bit past the London Mine just below the first really steep/rough section of road after the crossing of Mosquito Creek. We got a later than hoped start at 9:15am, but we were not too worried as we knew it was to be a short hike and we were just into taking things leisurely.

Shortly into the hike, we ran across some amazing areas of wildflowers and I took a few pictures, but figured there would be more time for that later. We loosely followed the road to where it crosses the saddle between London Mountain and “Repeater Peak” and headed up the East Ridge.

The summit came in no time and we kept on moving toward Mosquito, as the building and antennas were not all that appealing. The walk over to Mosquito and then Treasurevault was quite simple and uneventful and we took a nice break on Mosquito. By the time we got to Treasurevault however, there was a big dark cloud building quickly above us.

I of course wanted to run over and nab Tweto and Arkansas, but was just as happy to bail off the ridge and save that for tomorrow given the threatening weather.We meandered our way down valley and took a long break at a very tranquil lake above Oliver Twist Lake. Of course the dark cloud had dissipated or moved on and it was again a perfect sunny day.

We took advantage of this opportunity to completely take our time and not be rushed.As we descended back down the valley, we came across the amazing wildflower patches that we noted on the ascent and even more that we had missed earlier.

I was in picture taking heaven and lingered for an unknown amount of time snapping picture after picture, completely lost in the moment.I think we finally left around 2 and headed back to George’s cabin where we read, napped and then headed to Alma for an excellent meal at the South Park Saloon. It was awesome to just take things easy today and relax.

Thanks again to George for "letting" us crash his cabin ;).