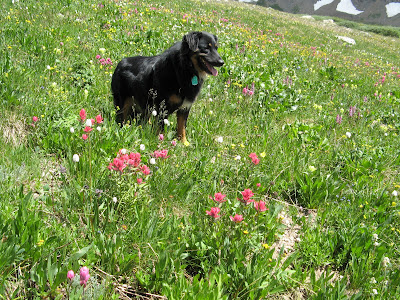 We again parked after the crossing of Mosquito Creek where we parked for yesterday’s trip http://www.fourteenerworldforum.com/showthread.php?t=12847 and headed North up the valley toward Tweto. The hike could not have been simpler and we made the summit in about 90 minutes taking it quite casual. From the summit, we debated heading over to Mount Arkansas, but again clouds were building and it looked a bit further and more involved than we were willing to commit to. I considered running over there, but the lure of the sprawling valley of wildflowers was overpowering.

Again, I was in la la land and took countless photos of the vast array of flowers carpeting the valley. We had the entire place to ourselves and were amazed and thankful that the masses cruise past without a glance. Good stuff!!