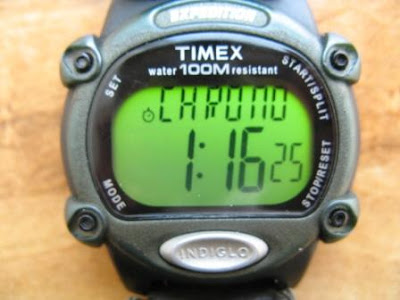 Got an invite from Lisa to join her and Scott Elliott for a trip to Pikes Peak. How could I pass it up? The plan was to catch a ride on the cog railway to Mountain View (only $10 if you can catch a standby seat), run to the top and meet Scott who would be up there waiting to give us a ride down and shout some encouragement. Awesome plan.

Waiting in line for the railway, Lisa introduces me to Yvonne and the name rings a bell, then I turn and remember why, when I see Matt Carpenter, oh yeah, Matt’s wife. We pay our $10 and all get seats on the train and sit next to one another and chit chat on the 33+ minute ride to our stop. We learn that Yvonne and their daughter are going to camp at Barr Camp, while Matt is going there to pick up some filters to transport back to town and meet them up there later. Dang it, I was hoping to chase Matt and see him strut his stuff on Pikes. As a consolation prize though, he jogged with Lisa and I over the ~1.5 miles. It was cool to run with him for a short time at least, very nice guy and certainly a legend of Pikes Peak.

Once at Barr Camp, Lisa and I discussed plans. Her plan was to run casually to the A-Frame and then nail the last 3 miles. Mine was to just to ease into it and see how I felt after hammering Grays/Torreys on Monday. I started off at a reasonable pace and my legs felt surprisingly good. I wanted to get a good workout, but not really get into the red and set myself back at all.

The higher I went, the better I felt. Made the Bottomless Pit sign in 10:58, then the A-Frame in 31:53 (20:55 split). After the A-Frame I was still feeling great and was not really digging yet, so I figured I would up the effort a bit, but still be careful to not overdo it. Made the 2 to go sign in 47:37 (15:44 split), cruised the next “flatter” mile and made it to the 1 to go sign in 1:00:37 (13 even for this mile), then tried a bit to up my game for the final mile, as I knew Scott would be up there watching and I of course had to look good. Got to the base of the Golden Stairs and I could hear Scott yelling from high above. I snuck in a few walked steps while I knew I was out of his sight, as it is just not efficient to try and run those bigger ones.

After the steps, there are a few more reasonable switchbacks and even a short downhill and I was really encouraged by Scott’s cheering and on the fly coaching. I was really cranking hard through here, giving it all I had, everything was clicking surprisingly well. The last few hundred feet of trail REALLY hurt, but I just put my head down and gave it all I had, finishing in 1:16:25 from Barr Camp with a 15:48 split for the final mile.

This was by far the fastest I have ever run the upper part of Pikes and I was quite surprised after the workout I had on Monday. I felt as though I gave it a good effort, but did not really extend myself too much until the final mile, it all felt totally in control.

Once I gathered myself, I ran back down to join Scott as he cheered Lisa on. She then decided to do an extra final mile, but I politely declined. Scott and I found a good vantage where we watched/timed and I then ran with her the final ¼-1/3 mile to give encouragement and I regretted not doing the whole mile, as I still felt great. Lisa really motored her final mile, in something like 15:08 I think, amazing, she will have an awesome race!