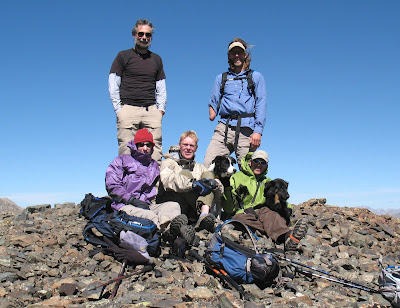 Aron and I had been exchanging e-mails during the week discussing possible plans for Saturday. I mentioned that we were thinking of heading to the Sawatch to climb some 13ers, but had no definitive plan, so Aron quickly suggested the above peaks and possibly Aetna/Taylor if we had time. I was game for getting them all, but I was doubtful Allison and Sierra would be up for all of them, so we just figured we would just play it by ear. Usual hiking partners for the weekends (Hales/Kevin) were eager to join and committed to the trip at the last minute and we were excited to have them along.

We got started at a not too early time from around 10,600ft, just a short stretch down the road from where Cyclone Creek intersects near the old Shavano town site labeled on the map. From our parking spot, we crossed the road and meandered North on the gentle South ridge of Carbonate. The pace was casual and we all just took our time conversing and enjoying the morning. When practical, we tried to stay just over to the East side of the ridge to avoid the cold breeze sweeping past, a nagging reminder that winter is not far around the corner.

We took a long break on top of Carbonate, allowing time for regrouping, snacks, pictures, register signing (we saw Kunkle’s mark everywhere we turned) and moved on to Cyclone and “Lo Carb”, taking short breaks out of the wind on occasion. Unfortunately, Emily was having a bit of an off day, so she opted to head down from the Carbonate/Cyclone saddle. After another long and leisurely break on “Lo Carb” taking in the amazing views of the neighboring peaks, we set off for Grizzly.

I had not really done my research, but we were a bit surprised to see that it was not the rolling tundra walking we had become accustomed to, but instead a steep and loose mess of teetery talus with a few class 3 sections.

Aron, closely followed by Dave and Shep, cruised across no problem, while I waited to help Allison, Sierra and Kevin along. After much procrastinating as to whether or not they should continue on, or backtrack, I finally convinced them into following. Nothing about this ridge was overly difficult, but it was a bit dangerous due to all the loose boulders stacked this way and that like a house of cards. Allison, Sierra and I made it unscathed, but unfortunately Kevin caught a rock on the elbow and decided to bail at the saddle.

Kevin insisted that he was OK, and was just done for the day, so Allison, Sierra and I continued on to Grizzly, where Aron and Dave were patiently waiting, having sat up there for quite a long time waiting. I felt really bad that we had kept them so long. Knowing that Aron had an appointment to keep, we encouraged he and Dave to cruise ahead while Allison and I rendezvoused with Kevin on the walk out and got a ride back to camp with him. All in all a great day out with great partners and perfect weather.