Had a sweet run with GZ today up S. Boulder and Bear. Went a moderate pace, which was fine with me as I am still not feeling totally recovered from RRR (although much better each day now). It was great to catch up with George, as I was injured for 6 weeks, then as soon as I healed, George got an achilles injury that he is now bouncing back from. We went conversation pace all the way to the saddle, then I upped the pace a bit, since I wanted to tag Bear as well. Made the summit in 56:54, got back to the saddle at 1:00 even I think, Bear at 1:05:53 and then met back up with George just above the saddle on the Bear side. We went down quick, but not really killing it and this is where I was still getting the biggest hints that I am not recovered, as my calves were pretty tight by the time we finished at 1:44:15. It was a great day for a run, cool, but not cold and the trails are mostly melted out.

Today was my 3rd day on the prototype Pearlizumi Fuel XC shoes, one of two pairs currently in existence. Scott Jaime has the other pair. I could comment on them, but then I would have to kill you. You'll just have to settle for a picture..... 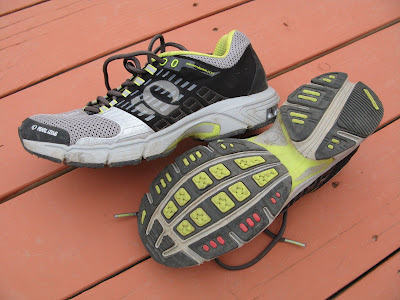 Posted by Jeff Valliere at 5:39 PM