My sister Darcie flew out from Virginia to visit with me, motivated by the opportunity to see Lance race again in the Leadville 100, as she is a huge fan, stemming back from her childhood when she would come to my races and swoon over Lance. She was not disappointed, as she got to see him up close 7 times, before, during and after the race.

Getting around the course to view the race was a breeze, since Kevin knew the course well as he had been to the LT100 before to participate, crew and spectate numerous times. Although there were large crowds, it never felt crowded and we never got stuck in traffic nor were we ever slowed down.

The highlight for me was watching Lance ascend the long and steep centerpiece climb called "Powerline". We were getting updates that he was leading by a large margin and anticipation of his arrival was great amongst the crowd. I watched from about half way up the climb and the crowd was going nuts as he rounded the corner, followed by a dirtbike (camera crew) and a large group of crazed spectators following close behind and along side.

As he passed, I was snapping a bunch of pictures and before I knew it, broken foot be damned, I was now part of the scrum running up the hill, camera in hand high above my head taking pictures in rapid fire mode. Before I knew it, most of the fans had peeled off and it was just me running behind. I tryed to pass on the right to get some better shots, but this happened just as the gradient was relenting and he was starting to crank up the tempo. Being careful of my foot, I backed off, content with over 100 pictures in just a few minutes. After watching the race, I am half tempted to get back into biking shape next year and give it a go.... food for thought.

My sister Darcie in a crazed dash for Lance. 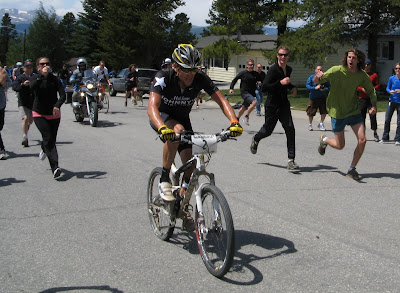 Another highlight of the day was meeting and hanging out with the one and only Anton Krupicka before the race, then running into him again later in the day on Powerline. Though not surprised, I was impressed by what a likable, down to earth person he is. Hopefully we get to do some running together when I am back on my feet. 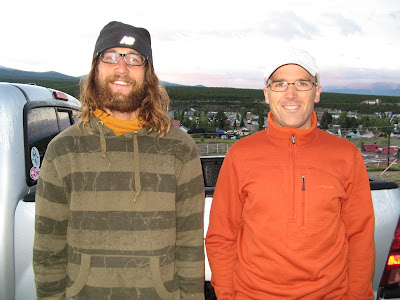