Overall a pretty good week, nothing crazy, just a lot of fun being outside getting back out on the peaks.  My achilles is improving, but the issue is definitely still there and I am being very aware and cautious by keeping my distance and effort somewhat conservative.  The good news is, thus far, nothing I have done this week has made it any worse and it feels a bit stronger each day.  Hopefully I can start pushing myself a bit more soon, as I have a lot of work to do to get back into decent running condition.

Wednesday 4/20/11: Wanted to get out, but had to work and then family duties got in the way.

Parked in Boulder and ran up the Boulder Creek Path. It was a great day to be out, except the headwind was a bit chafing (the Chariot was tough to push uphill/upwind, but it was more the annoyance to the babies that made me turn and the decision was boosted by a flat tire (that I was able to fix on the spot)). Went super easy, tending to the girls needs, taking pictures, showing them cool stuff, changing a flat tire and stopping by the bike shop. 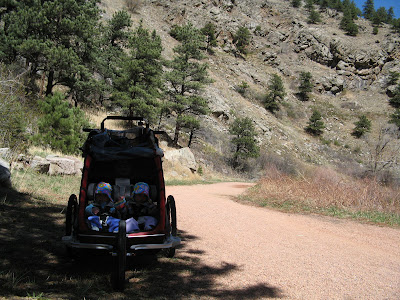 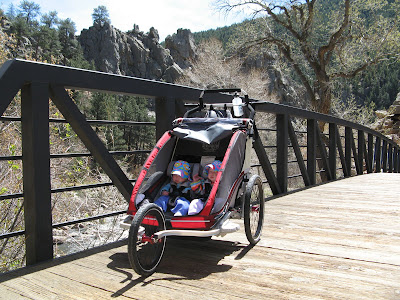 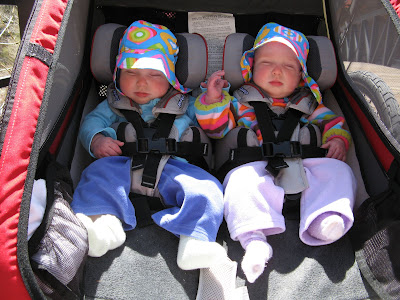 Put out a last minute call to Brandon and he bit. Sierra and I met him at S. Mesa (was not planning to bring Sierra, but she guilted me into it at the last minute) and we headed up the non leash law Homestead Trail(instead of Towhee which is a few minutes faster), then up the normal Shadow route to SoBo Peak. We went at a somewhat relaxed pace, chatting and catching up. Sierra did a great job on the ascent, pretty much going as fast as we wanted to go with only a few delays when she stopped to drink water and socialize with other dogs, but I quickly got her back on track whenever she lagged. Over to Bear after SoBo, I took the direct rock climb to the top for something different, while Brandon and Sierra just went to the post. The descent was casual, as Brandon is nursing an achey knee and we were waiting some for Sierra (she is always particularly slow from the mouth of Shadow back to the car, not really age related, as she has always "dogged" this section since she was 2 years old or so).

I was not expecting to get out, but Allison called into work sick, so I was able to get in a bonus run. Originally I thought about running 3 peaks, but it was 30 degrees and snowing, so I ultimately just figured it would be best for me to keep the run short, run a few errands and score points by coming home early to help all the sick ladies in the house (yes, the twins were sick too).  Went up Gregory/Greenman (middle route) and went a little bit harder than I have gone in a while, cautiously pushing the pace at times, but generally kept the effort moderate. Near the ranger cabin, the snow started to accumulate more and more and footing was less than ideal with the 2-3 inches of fresh snow, so this gave me additional motivation to keep off the throttle.

At the Greenman/Saddle Rock junction, I spotted a faint set tracks that I eventually recognized as a PI Peak XC shoe, perhaps it is somebody I know?  By the summit, the tracks seemed to be getting relatively fresher, so I suspected that I was making up time on this person.  I had previously decided to take W. Ridge/Long Canyon back and coincidentally, so did the person wearing the Peak XCs so the chase was on.  I picked up the pace a little bit on the down, knowing the tracks ahead were getting fresher and fresher and around each corner, expected to see the owner. Some ladies walking up making tracks helped me to judge freshness and I was doing track freshness math for quite some time.

Based on the stride, tangent cutting and accuracy, I knew whomever I was chasing was moving very well and had a long stride, so it seemed whomever I was chasing knew what they were doing.  After Long Canyon and below the cabin, the tracks unfortunately went left toward Flag and I headed down Gregory, oh well....

Passed Dakota Jones heading up Gregory, said a quick hi, but did not stop (not sure he even knows who I am, but we have a handful of mutual friends). On the way home in the car, Dave called me and we chatted for a bit and we slowly figured out that it was him I was chasing up/down Green Mountain. No wonder I never caught the mystery person!  He must have been taking it easy IF I was gaining on him.  We were both bummed we were running minutes apart on the same trail and had not coordinated even though I called him before the run and he was assuming I was on baby duty due to our conversation the prior day.

Up/down back.  Had a really bad headache all day, but the free time was available to get out after work, so I was hoping some fresh air would improve my well being a bit.  The elevated HR only made my headache pound worse and I did not feel all that great physically, so I kept the effort no more than moderate, but mostly easy.  The fresh air, light snow and overall Spring like conditions however did wonders for my mental state.  I bumped into Allison and Sierra as they were coming down the NW ridge above the Greenman/Ranger junction (was hoping to time it better to descend with them, but just a few minute stop was all we got unfortunately).  Sierra was surprised to see me and went absolutely nutso as she was so fired up.  I almost turned around with them, but was intent on getting to the summit.


Also tested out a new pair of shoes today as well, a pair of Mizuno Wave Ascend 6.  A bit heavy (11.? oz. which is seeming more and more heavy to me nowadays) but they are a really nice pair of shoes, great traction, stability, cushion and overall great feel.

Also briefly tested a pair of these yesterday, Mizuno Wave Universe 4.  3.6ish oz., so no wonder any other shoes feel heavy (these are being passed along to Brandon, as I can't ever see running in them).

Posted by Jeff Valliere at 7:52 PM