Woke up on Friday morning and got an e-mail from Homie who announced that he would be running 10 laps on Green to celebrate his birthday, that is 41 miles and ~24,000 vertical feet of climbing and descending, much of it on a trail that is solid ice.

With Allison's on call work schedule, I was not sure if I would be able to join for any laps, but was hoping for the best, keeping tabs and was at the ready all day, just in case.  Finally was able to get out the door late afternoon and join for laps 9 and 10.  Homie and GZ finished lap 8 a bit after 5pm, where Bill W, Kendrick and I were ready and waiting to join.  I was impressed with Homie's strength and resolve after being out there since 5am and aside from mentioning some blisters and that he had not been eating as well as he should have, did not complain one bit (as I might have been, and even did a bit after just 2 laps).

On the descent from lap 9, as we neared the Saddle/Amphi jct., we spotted some eyes down the hill, very close to where the Amphi trail doubles back.  We stopped and shined our lights and whatever it was, had some wide set eyes, was low to the ground and then got out of there fast and quiet after it closely checked us out.  I was 95% sure it was a lion, but we will never know for sure.  Either way, it definitely heightened our senses and we were a bit charged up and on guard for a bit.

Lap 10, a bit after 7pm and it was just Homie, Kendrick and I for the final push, but Dave called and said that he was on his way and would catch up.  We expected to have him catch us for much of the climb, but finally connected with us on the final switchbacks below the summit.  This, combined with being so close to the top gave Homie a strong surge of adrenaline and he put in a good sprint to put quite the exclamation point on an amazing day.

We took a few pictures on top, exchanged high fives and said our congrats, then Homie was out of there like a rocket.  I could barely keep up with him, as he was just ready to get the descent over with, eat and relax.  Finished at 9:09pm (I think) for what was for him a 16 hour and 8 minute day.  I was quite impressed with his accomplishment (though not at all surprised) and was more than honored to treat him to dinner at Illigal Pete's.  Congrats to Homie and happy 41st! 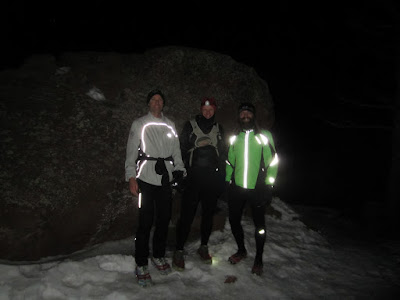 Dave, Homie and me (holding up a proud two fingers for my skimpy 2 laps).  Note the Microspikes on Dave's feet that Homie loaned him, I think he might be converted. 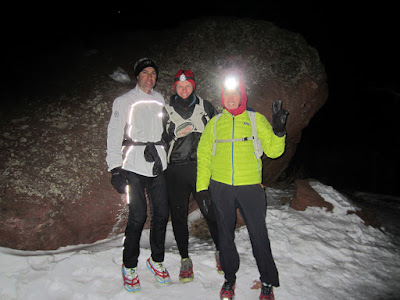