I had Friday off to do as I pleased in the mountains and was able to coordinate with Homie, Joe and Tony for a nice helping of 14ers.  Our plan was to do a point to point/car shuttle from the Rockdale TH (near Winfield) and over Missouri, Belford, Oxford, Harvard, Columbia and then down to my car at the Winter closure for the Frenchman Creek TH.

After a fun evening of laughter/catching up and a way too short night of sleep for me, we got started a bit before 7am and had a nice cold double creek crossing (knee deep) to wake us up before starting the 2.5 mile 4x4 road climb up to Clohesy Lake.  We were somewhat spread out at times at the start (due to various creek crossing tactics) but were all together for the final mile or so before the lake.

Above Clohesy Lake, the trail got super steep as it headed for the summit ridge of Missouri and we all spread out a bit as we settled into our own paces.  It was obvious that Tony was feeling great, as he took off up the hillside, where we could see him climbing away for some time and then was pretty much gone for the day after topping out on Missouri.

Normally, I would really enjoy such a steep trail that tackles the fall line, but I was not feeling all that great and seemed to be putting out too much effort for as slow as I was moving.  It seemed like a struggle to just get up the hillside, never mind try to push hard and I had a rare moment of wishing for switchbacks.  Nothing in particular really felt bad, but I just had no pep in my legs whatsoever and was quickly lagging behind.

Still thinking that I would continue all the way over all 5 peaks, I just dialed back the effort considerably and pretty much took it easy to the summit of Missouri, where Joe and Homie were patiently waiting.  After a quick gel, we were on the move again, dropping the ~1,300 or so feet down to the basin below the S. side of Elkhead Pass, before regaining the elevation up Belford.

Again, I was struggling to keep up, where my HR was not all in line with my perceived effort and I was quite thankful to top out on the summit of Belford and take a little break.  At that point, I was 99% sure that I would not be adding Harvard and Columbia and felt bad for slowing up Joe and Homie, as they had a long ways to go.

The trip to Oxford was generally relaxed, as we again all settled into our owns paces.  On the summit, we spent a few minutes consulting the maps, where Homie was trying to encourage me to continue on, but I knew that just returning over Belford and back to camp was going to be plenty enough for me.

My return trip went better than I anticipated and though not pushing hard, I was able to get back to the Missouri Gulch TH in decent time.  The ~2.5 miles of dirt road back up to camp however was not so fun, where I alternated jogging with short periods of walking.

Back at camp, I spent some time soaking in the creek and then just relaxing for the 3.5 hours until the gang returned.  It was actually really nice to spend a few hours doing absolutely nothing.

Though I did not feel as strong as I had hoped, it was awesome to spend a day in the mountains with great friends on the first day of June (my favorite month).  I felt surprisingly good in regards to the altitude (despite not getting up high much over the Fall/Winter/Spring), but I think that my legs were just not quite recovered from my hard 10k on Monday and subsequent run up Green (probably not the best combo), as my legs were sore enough to have me limping on Tuesday and Wednesday.

No complaints though on a near 6 hour run, three 14k summits and 7,155 vertical.  A good way to ease back into the high mountains and certainly a great workout. Homie pointing out the route from Huron down to Clohesy Lake 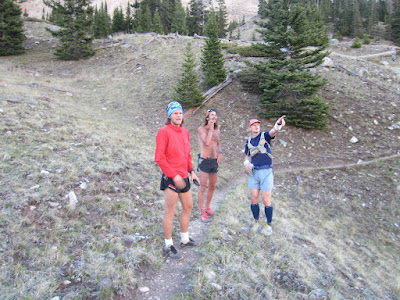 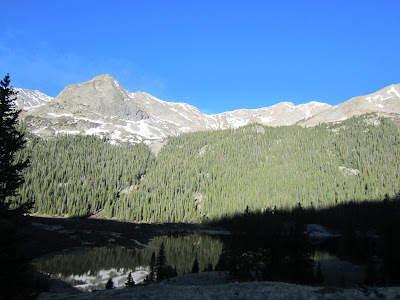 Homie about to pass/drop me to the summit of Missouri.  He is in super shape right now. 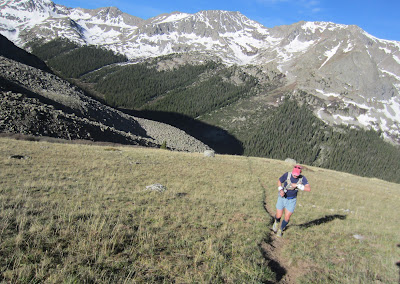 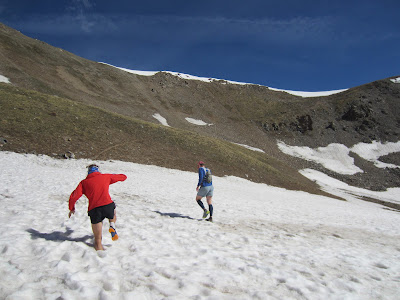 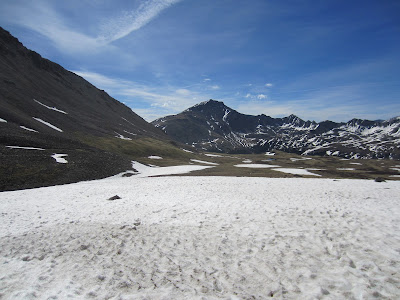 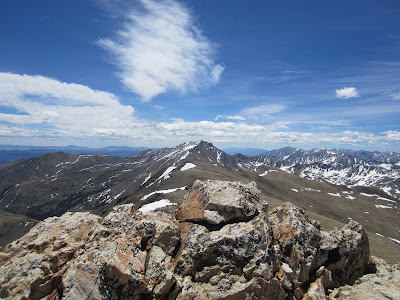 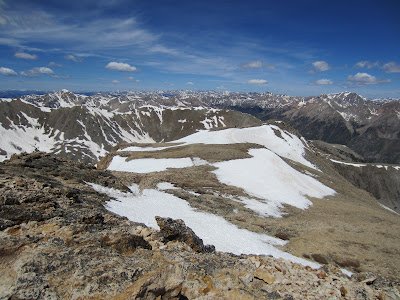 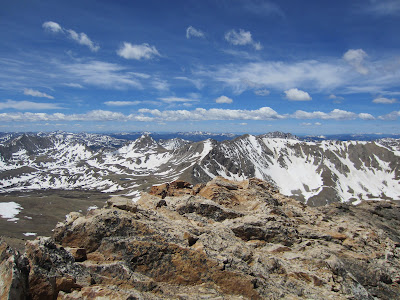 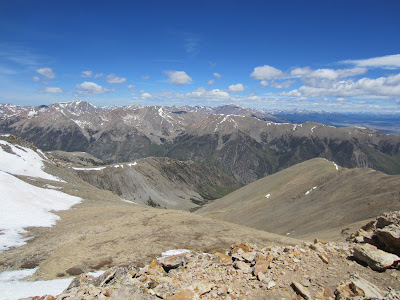 Posted by Jeff Valliere at 6:49 AM