I ran Bill's race back in 2005 and had an awesome time, but unfortunately, every year since has fallen on (or too close to) my anniversary and I have not been able to participate since.

This year, the race was scheduled a few days before, so I was good to go.  Except, I was on baby duty.  I waffled as to whether or not I wanted to try and find somebody to watch them for 30 or so minutes while I ran, or just head over and spectate and take pictures, but on the day before the race, I got 3 separate offers.

In the middle of the night last night though, in my sleepy stupor, I double checked the race start time and realized that it was 8am instead of 8:30am as I had been thinking all along.  I opted to just bail on the whole thing, as often times the girls sleep until 7am and it can be a real struggle to quickly mobilize two 2 year olds.

I had shut off my alarm and awoke at 6:45am and heard at least one of the girls making noise, so I popped up, got dressed, ate and we were out the door by 7:15am which was quite the race in and of itself.  Definitely a PR.

Arrived at 7:32am and coincidentally parked very close to Joey and Heidi, where Heidi and her mom would be babysitting for me.  They immediately jumped into baby sitting mode while I went to register and get my number.  I had just enough time to obtain my tech race tee, pin my number on, pee and warm up for a few minutes.

Homie was the official honorary starter and before I knew it, we were sprinting up the road into a bit of a headwind.  I might have been in 10th or 11th position for what seemed like an eternity, but was really only a few minutes.  This section was really painful, as I had not warmed up nearly sufficiently enough and I was half tempted to just peel off.  I passed a few people as I started to get into a bit of a groove and was in 6th by the time we entered the steeper technical singletrack of the Eldorado Trail.  About 1/3 of the way up, I passed 2 more guys, moving into 4th place and was in close proximity to Andy Ames in 2nd and Toby ? in 3rd.  John Tribbia was long gone.  I was maybe 20 seconds back on 2nd/3rd at the turn around (12:55) and then eased into the fast and technical descent.  I was soon pushing very hard, more trying to hold onto 4th than I was trying to move up places and was surprised to catch Andy and Toby about half way down.

I was going a bit faster on the descent than Andy and Toby, but once I caught them, the trail was not quite wide enough to easily get by and I did not want to ask them if I could pass (though in retrospect should have, because the pace then seemed too easy and I definitely lost some time here).  Once back on the road (17:??), Andy and Toby really gassed it and started getting ahead of me (as I suspected they might), where I was just hanging on for dear life at that point.

By the next turnaround at the end of the Fowler Trail, I could hear 5th place breathing down my neck and he soon passed me.  It was then I regretted not building more of a cushion on the technical descent of the Eldorado Trail.  I kept him close for a while heading toward the finish, but once the trail smoothed out and then really dropped down the steep road, he was outstriding me and I knew then that I was now fighting to hold 5th.

I glanced back once along the road and did not see anybody, so now I was just pushing to beat my 31:27 PR from 2005, but I was secretly hoping to go under 30.  It was not to be though, as the second hand on my watch was running way quicker than I, but was able to sneak in just under 31 minutes for a 32 second PR.

Though I made the mistake of not passing on the down and quite possibly lost that one placing from behind, I was pretty happy with my result, as I gave it my all the entire time, was able to PR, take the Masters win and thus get an early pick at the loaded prize table.  It was a toss up between Microspikes and a free pair of La Sportiva shoes, but I ultimately opted for the shoes, as I can let Allison pick out a nice pair of trail shoes.

Post race, I was able to chat with quite a few friends and acquaintances which was a great time.  It was awesome to race on a trail so close to home, quite a rare opportunity.  If you have never done this one before, I can't say enough good things and I highly encourage you to run it next year.


Oh yeah, HUGE thanks to Joey's wife Heidi and Heidi's mom for watching the girls while I raced.  It was comforting knowing they were in such good hands.

Congrats to Tribs for rocking a 27:10 and taking down the course record (yet again). 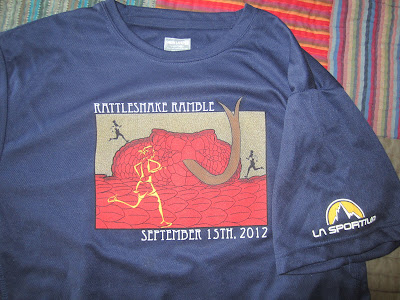 Posted by Jeff Valliere at 2:42 PM