I'm still here, just way too busy to post much more than monthly, as any "spare time" I have needs to be put toward running instead of writing about it.

My Grand Canyon run is in 2 weeks and I am feeling pretty good about it fitness wise and am really eager to get away from home and have four days of freedom to enjoy a nice run across the big ditch and back.

Though I can't wait to get out there and start running, I am simultaneously a little nervous about the pain I know I am planning to put myself through and have some flashbacks about how trashed I was after my run in 2010.  I can vividly remember like it were yesterday, dry heave staggering the 1/2 mile back to the van and then arriving there, not being able to eat or drink, not knowing whether to sit, stand, lay down, I was so hammered.  A fit looking foreign tourist with an Ironman Az. shirt, recognized my situation and despite my protests, forced a Gatorade on me.  He could relate to what I was going through and I appreciated his concern, helped me a bit to get it together, if only for the sake of posterity.  Despite this vivid memory and swearing I would never do it again, here I go.  Anything is easier than raising twins though.

Some friends completed RRR last weekend and reported no snow of consequence on the N. Rim which is an improvement over the near record snowfall that still covered the upper section of trail in 2010.  Now if only I can get a cool day and good luck with the mules, I should have a solid shot at achieving my goals there.

I got in a great run yesterday, 2 laps on Green (up ASG first lap and up Greg/Ranger second lap) and then ran down Flagstaff road both times.  Felt pretty decent on the first lap, but was slowed on the ascent a bit by the icy trail conditions and then took it easier for the final ~10 minutes running with my friend Dan.  He joined me over to Flag, where I got a bit ahead of him in order to pound my quads a bit and keep on my schedule.  Ended up averaging 5:59 pace for the descent, but that was hindered a bit by an important phone call from my sister that I had to answer.

I was a little slower on the second lap, as I was feeling that hard road descent and just conceded to keep a steady pace, but not really push.  At the summit, I debating just taking the short way down, but again opted for the road, just a little slower this time.  Near the bottom though, I decided that I had had quite enough pavement for the day and gave in to the lure of the trail.

March ended up being a decent month for me despite being sick for the last 2 weeks, having a short unrelated flu the week before and the persistent snowfalls that junked up the trails multiple times.  So for March, I ended up with: 54,873 vert./131.8 miles/31hrs:36min/20 Green ascents, with a smattering of Bear, Sanitas and another 8,500ft. peak thrown in.

Oh, have been training these two more and more, here they are heading up Sanitas Valley.  Progress is slow but steady. 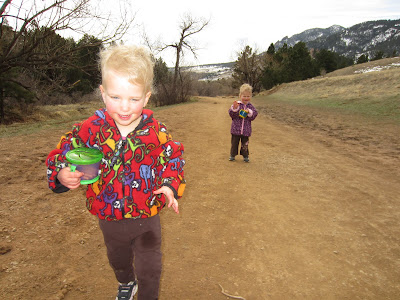 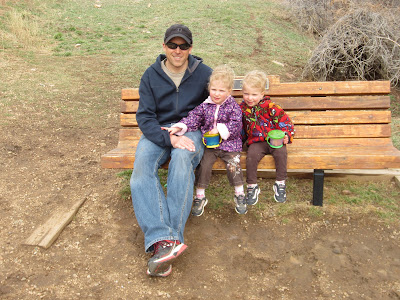 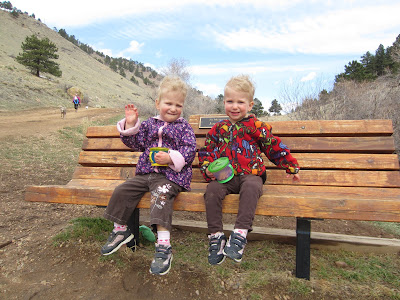 Posted by Jeff Valliere at 9:52 PM