Having made an attempt at Buffalo in May, 2008, I was simultaneously eager to get back there and finally make the summit, yet not too excited, knowing how slow and tedious the terrain is.

Allison and I had a full day and a half without the twins, so we were eager to get out to Lost Creek Wilderness for a hike and maybe catch some waning Fall foliage. We initially were set on a repeat of Bison/McCurdy, but after spending Friday afternoon/evening transporting 3 tons of crushed stone and a massive pile of woodchips to the back yard, along with all the associated landscaping work, I was too exhausted to even think about packing, getting up early or doing anything physical.

After 9.5 hours of solid sleep (amazing how well one can sleep without kids in the house), I felt refreshed, so we packed quickly and were out the door a bit after 8am. We still had no idea where we were going in LCW, we just headed up 285 with Roach book in hand. We narrowed it down to Windy (new for Allison, but a repeat for me), or Buffalo, which would be new for both of us and soon committed to Buffalo, as it is only 5.2 miles.

A few miles down Park County Road 68, South of Bailey we started to encounter snow and ice on the road and I suspected that we would not be able to make it to the trailhead on the steeper, North facing Stoney Pass. Just beyond Wellington Lake, there was a reasonably deep creek crossing, followed by a steep icy grade where I would have no momentum to even have a chance, so we turned around and parked, which would add an extra 3 miles to our hike. The walk up the road was a pleasurable warm up in the warming sun and led us through some brilliant aspen groves. The road, as remembered got steeper and as expected got icier, which validated my decision to park where we did. AWD and studded snow tires or chains would have been a must on this morning.

A beautiful start to the day 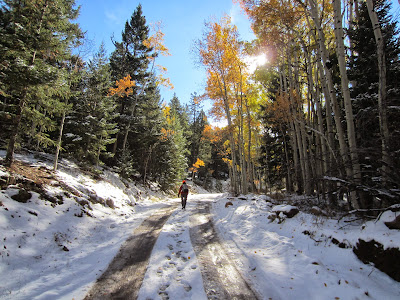 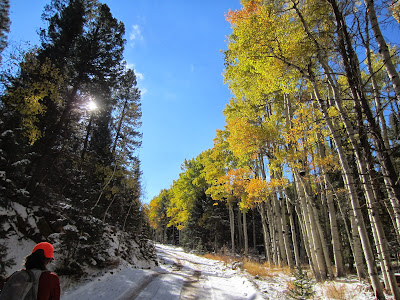 Once at the pass, as Roach states “the hike is completely off trail and stark in its simplicity”.  “Bushwhack 2.3 miles SW up unrelenting slopes to 11,400, then it still does not relent”.

Having been here before (but only to 10,000 feet) we knew what we were in for and the fresh snow added to the challenge.  This route required constant attention to keeping on the proper track on a macro level and continually trying to find the path of least resistance over the continuous deadfall and at times thick trees and bushes.  There were numerous false summits along the way and we were constantly wondering where the heck this summit may be.  Though on paper the route is quite simple, it is almost entirely in the trees with very few line of site opportunities.  We did not have a map or GPS, so I was relying on my memory from 5 years ago and a good bit of dead reckoning/terrain reading.


Sierra sporting her finest Winchester hunting vest (yes, it is hunting season and we heard a lot of distant gun shots, but fortunately nothing close) 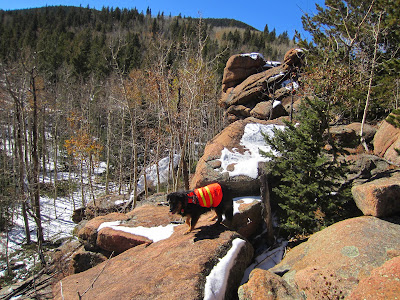 Looking North toward Mt. Evans with the Castle and Wellington Lake in the foreground 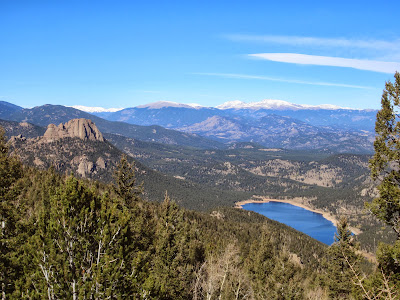 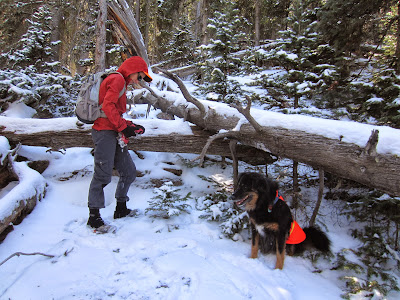 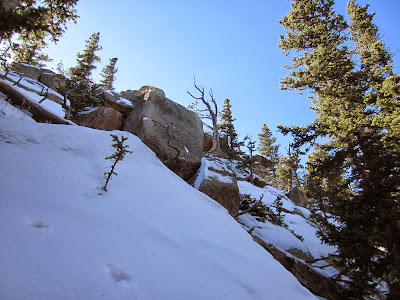 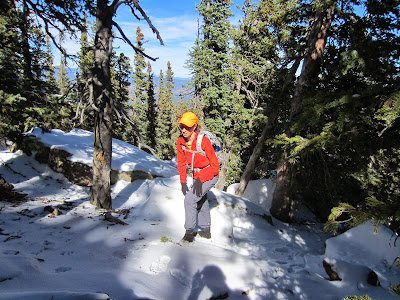 Progress was slow and combined with our 10:08 am start, casual breaks and approaching turn-around deadline, I was starting to think we may not make it, but the prospect of having to come back for a 3rd attempt at this peak was gnawing at me.  At 11,400, there is a large meadow where we took a break to get a bit of energy and assess.  I knew we had to be very close, as we were just 100 vertical feet from the summit and the distance on my Garmin watch further hinted at this.  Sure enough, after pressing on for a few more minutes, the Eastern summit appeared and we were quite relieved.  The true summit though is the Westernmost of the twin summits, just a few hundred yards away, with a bit of a dip.  A few minutes of careful boulder hopping and scampering got us there and the views did not disappoint.  It was a perfect fall day and we of course had this remote and difficult to access peak to ourselves, spending 15 or 20 minutes enjoying the views.  At 2:25pm, we figured we should get boogying, as we knew the difficult terrain would be slow on the descent as well.  Microspikes helped tremendously and the descent went easier than expected, as I could follow our ascent tracks and just cruise on auto pilot. 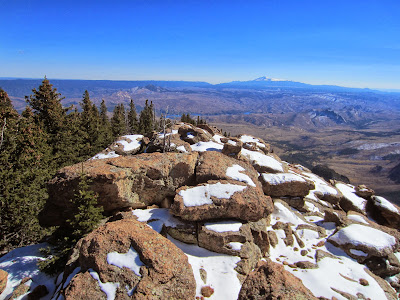 View to the South 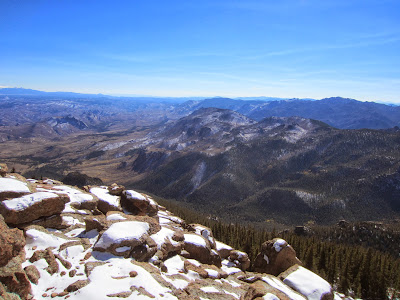 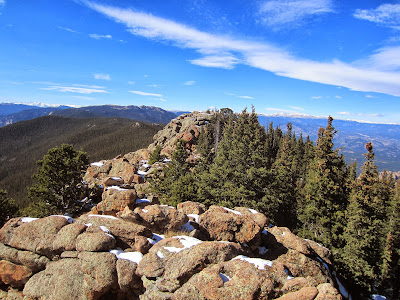 Looking back at the East (lower) summit from the West summit 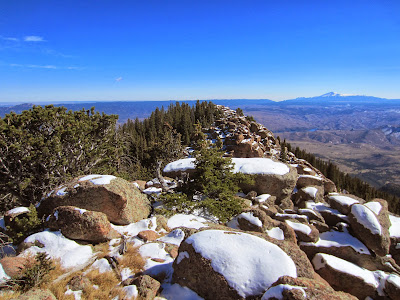 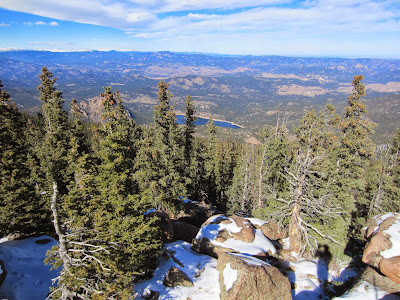 View to the West 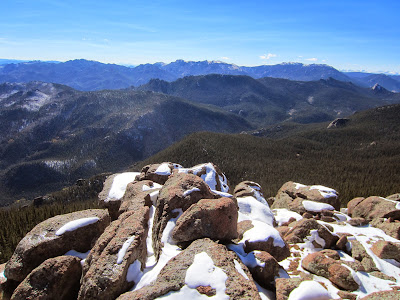 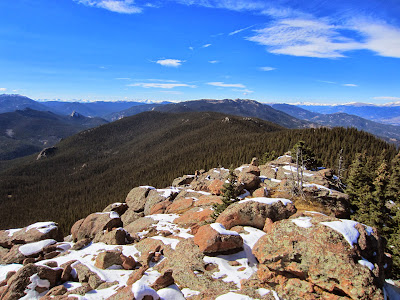 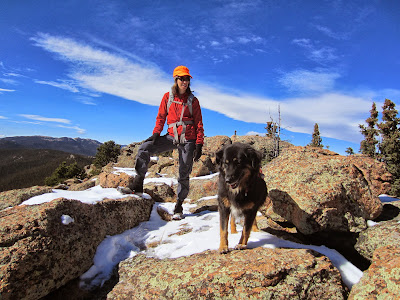 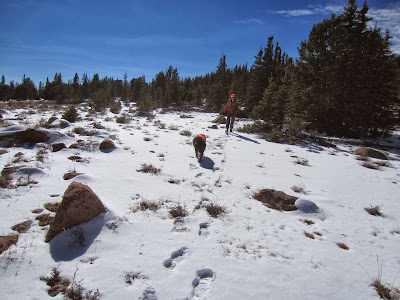 At 2:25pm, we figured we should get boogying, as we knew the difficult terrain would be slow on the descent as well.  Microspikes helped tremendously and the descent went easier than expected, as I could follow our ascent tracks and just cruise on auto pilot. 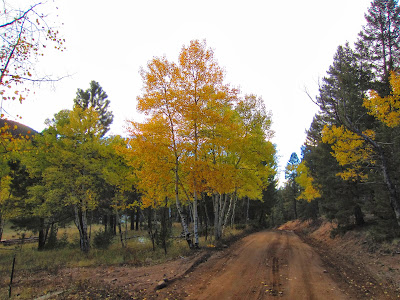 Buffalo is a bit of a challenge, but is really fun if you enjoy steep bushwhacks, routefinding and log hopping.  Was thinking it would be a blast to put together a Windy/Buffalo link up with a car shuttle someday.