Had a great time at the Barr Trail Mountain Race.  Ran this one in 2006 and enjoyed the course and organization, but had a terrible race due to the heat, sucking on the downhill, complicated by severe blisters on my feet.  I have always wanted to come back to put in a better effort, but never really got around to it for whatever reason and for the past 5 years, have been working Sundays, so I save my Sunday favors for when I really need them.  This year however, I passed on the Mt. Evans Ascent and decided to hit up BTMR instead, as it is a great primer for the Pikes Peak Marathon in just over a month.

Had great accommodations less than 10 minutes away from the start at my friend Jeff Kunkle's house (thanks Jeff!), but was wide awake before 3:30am.  I was not nervous, but just woke to pee and could not get back to sleep, just getting antsy I guess.  Headed into Manitou, found some close free parking  near Soda Springs Park and biked up to the start line/cog to get my number.  Took my time getting ready as I was quite early, with plenty of time for warming up (on the bike mainly riding up Ruxton and all over town looking for an open bathroom).

The race started promptly at 7am and it was warm, but not too hot yet.  The fast runners went off the front as expected, as did the not quite as fast runners, as expected.  I was sure to not get caught up in the excitement and settled into a comfortable and sustainable pace in probably 25th position, but it seemed further down. 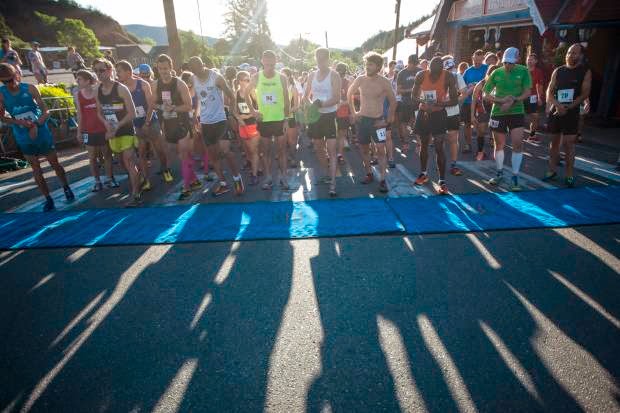 Once the course turned from pavement to dirt, I kept my effort the same, but runners started to come back to me one by one, pretty consistently through the Ws.  I casually peeked down on each switchback and could see a few groups of two or three pushing a solid pace, so that motivated me to not let up, but I was in the rare (for me) mindset of hunting forward vs. worrying about who was behind. 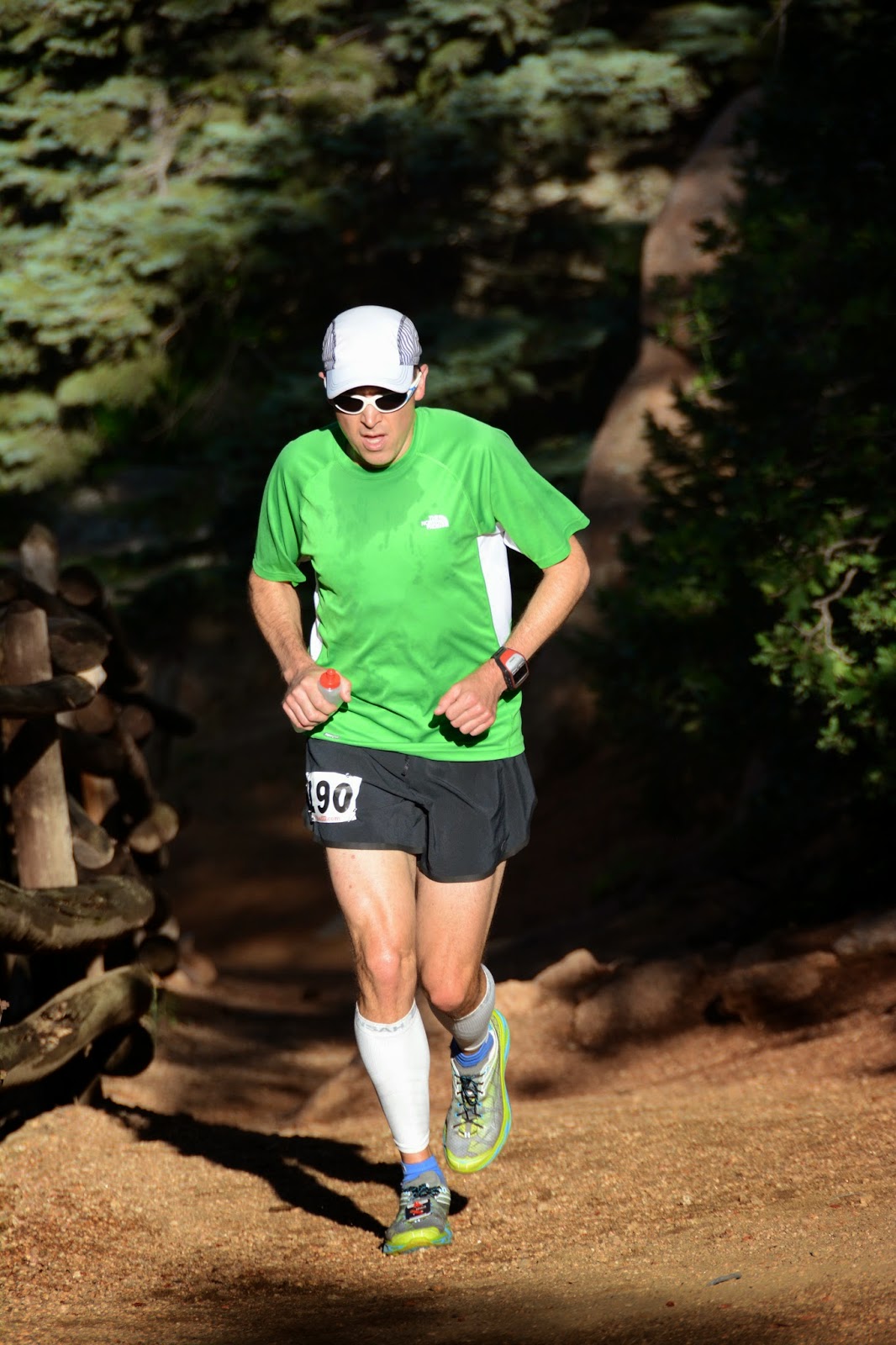 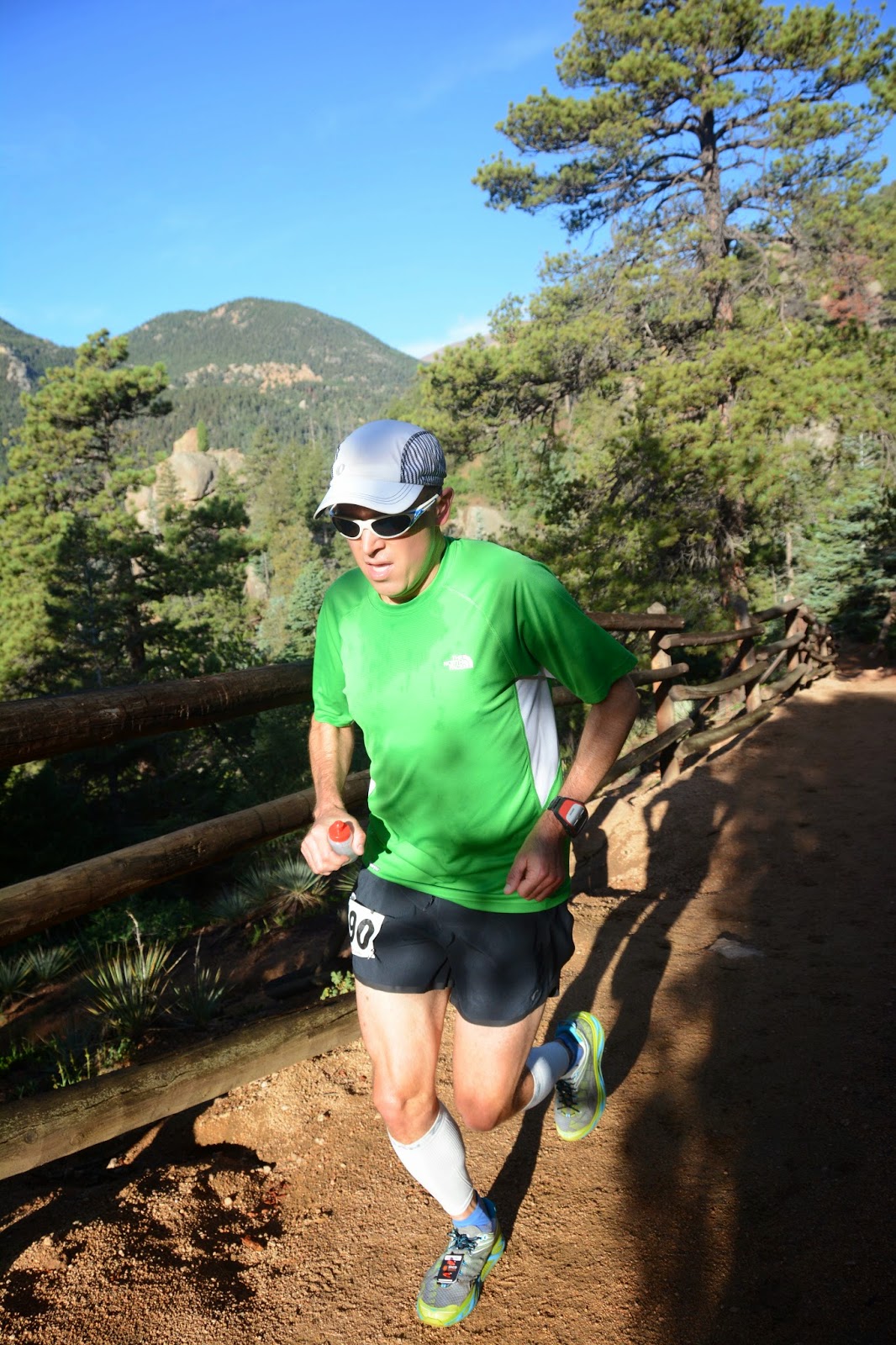 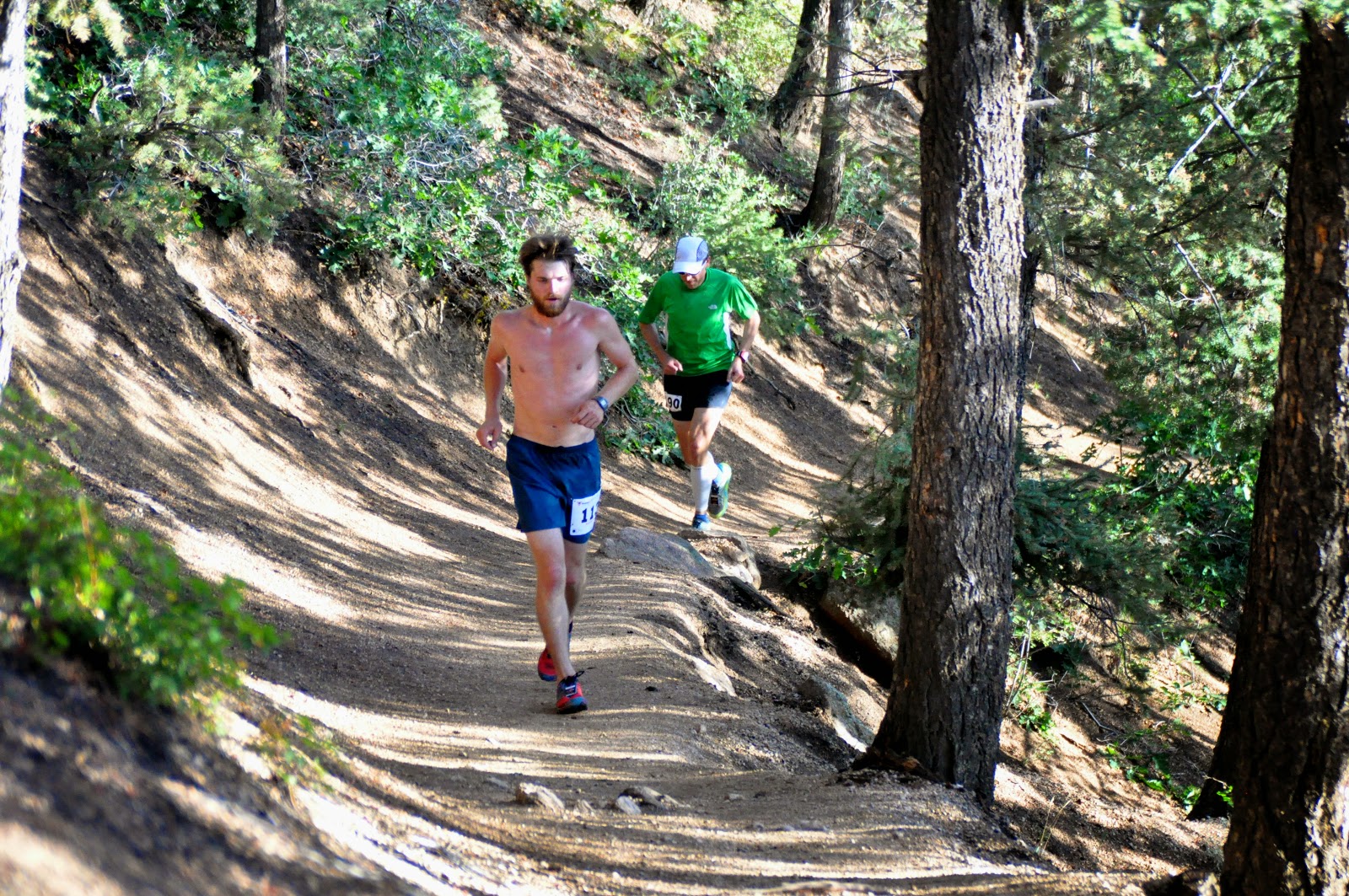 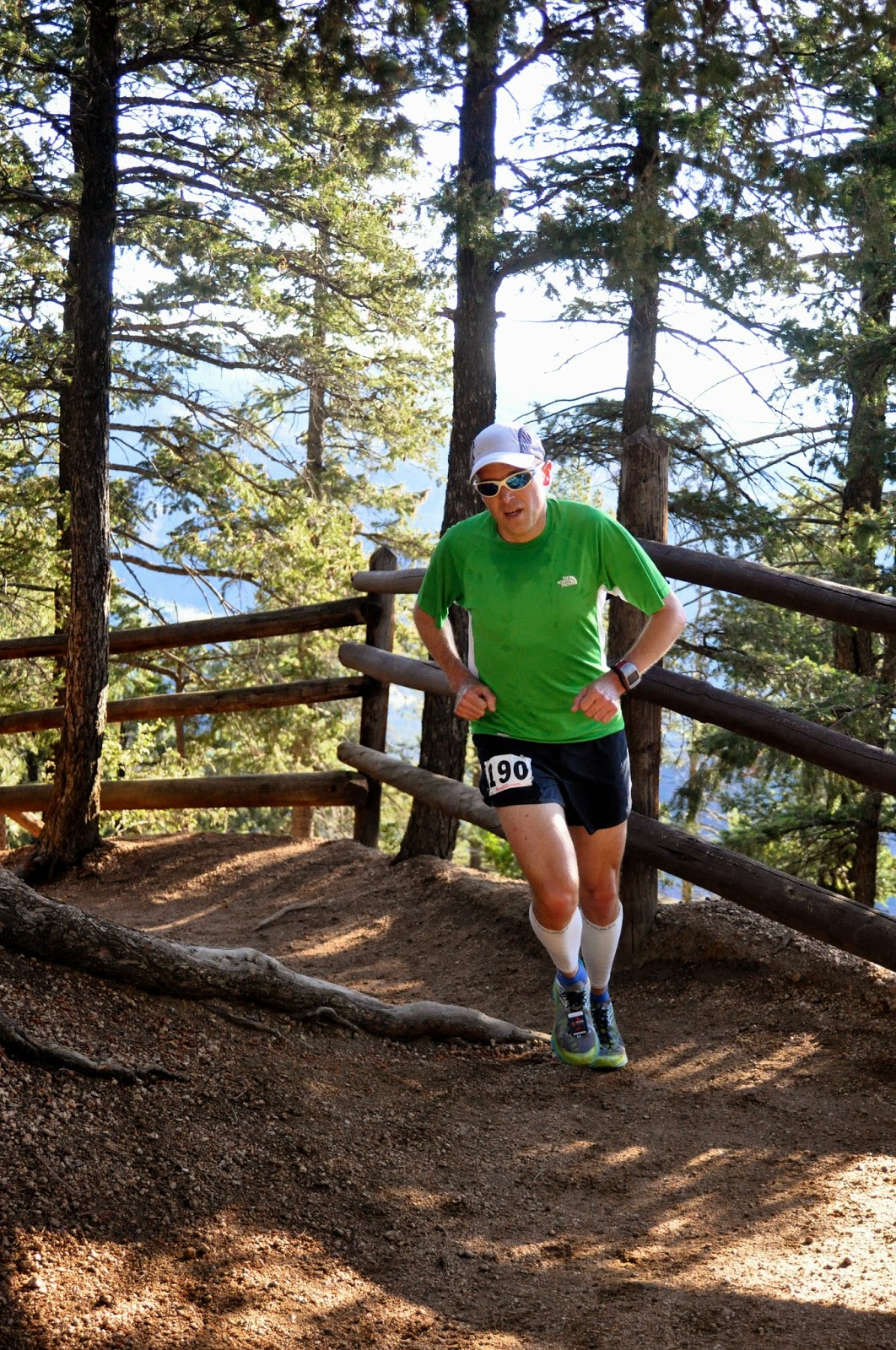 After passing at the top of the Ws, aside from occasional glimpses of eventual women's winner Brandy Erholtz up ahead, I saw no other racers until near Barr Camp as the runners ahead of me were coming down.  The out/back nature is great, because you can count your placing, see how others are looking and accurately gauge where you stand.  It is also bad, because others see where you are and how you are looking.  Everyone ahead of me looked really fast and too far ahead for me to catch, except for one guy who looked to only be a few minutes up and I could tell he was struggling a bit.  I smelled blood.

A quick turn at Barr Camp and I was relieved to get going with the down (somebody was there cheering "Go JV!!, but I was not sure who you were, thanks for the support if you are reading and sorry to not recognize you, I was in the zone so to speak).  I was tempted to just go for it right away, but took the time to take a gel and a few sips of water just for good measure.  I'm not sure I really needed this though for a sub 2 hour effort and in retrospect regret the wasted time (I get distracted by this, taking me way too long it seems during a race, a good 5 or 6 minutes before I really started pushing at my best).  In 2006, it was the descent where I really fell apart and crowds of people passed me, but this year I was determined to hold my ground.

I cruised pretty well in general, never letting my effort flag and keeping the HR up as high as I could, but I found myself occasionally getting some good abdominal cramps.  It is odd that this NEVER happens to me in training, yet happens occasionally to me on the Barr Trail.  Have not figured that one out yet.  I found myself having to slow periodically to help temper the cramp while rubbing it with my hand as best I could, but did not let it discourage me.

Above No Name, I could hear the screams from the aid station crew just ahead and knew that I was gaining on somebody.  Hearing this had me amped up and I blew through the aid station in full pursuit. 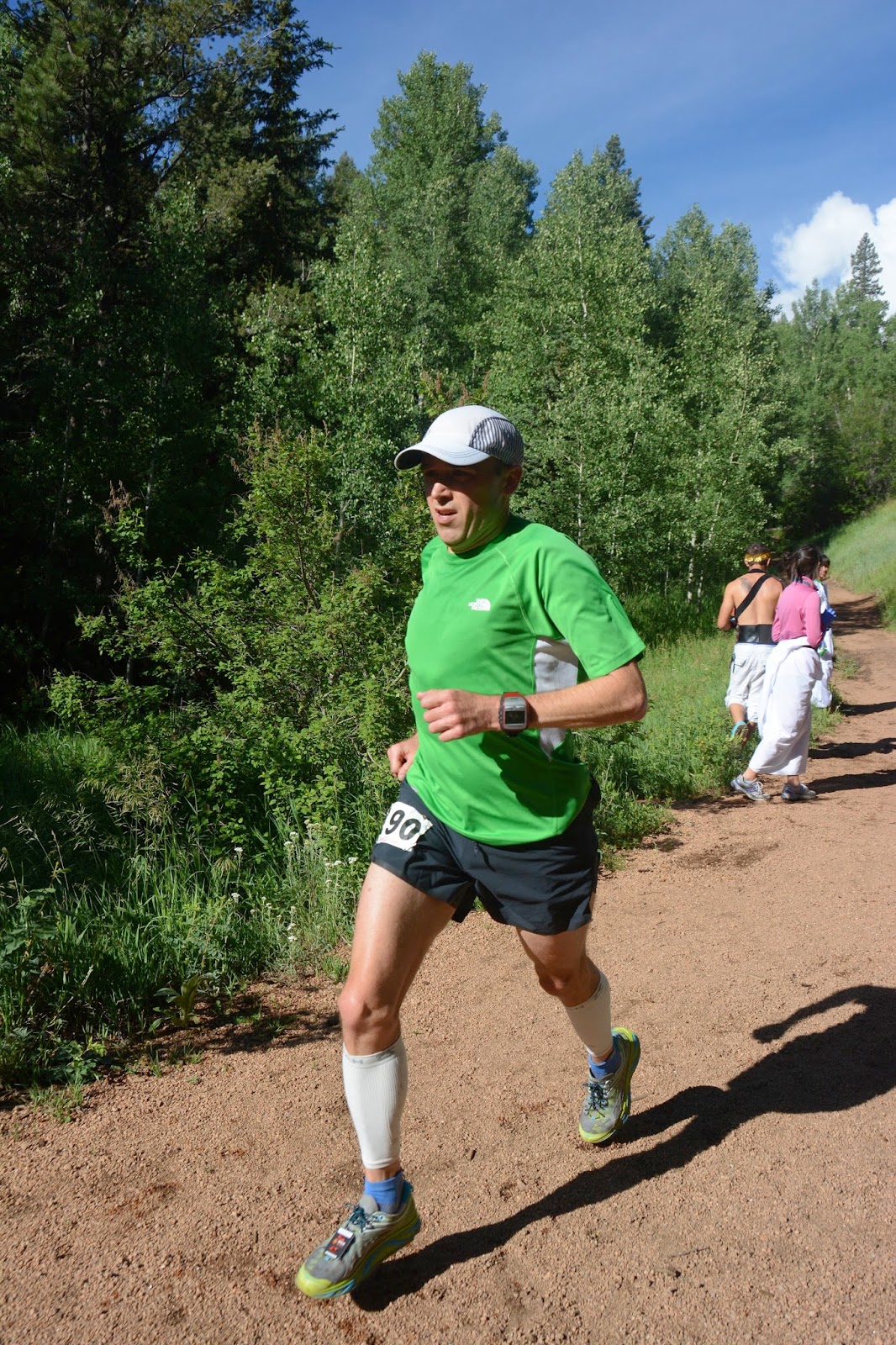 I caught my first glimpse of the runner ahead a little ways below the rock arch and could feel that primal surge of adrenaline pound through my chest and head.  I soon caught him shortly into the Ws and moved into 14th place.  At first, I seemed not so sure that I could make the pass stick, but I knew that I had gained those minutes on him for a reason and kept on forcing the pace.  Soon he was gone, but I was not naive enough to coast it in and rest on my laurels just yet, as I have been bit by this mindset in the past.  The watch kept clicking by way faster than I wanted though and I knew I was flirting with the 2 hour mark which had me motivated to keep pressing.

The finish is not all down hill though and I was fearing the short, but very steep kick up to the line.  The crowds there were very enthusiastic and I was still feeling great, so I was able to give it a strong kick to the line. 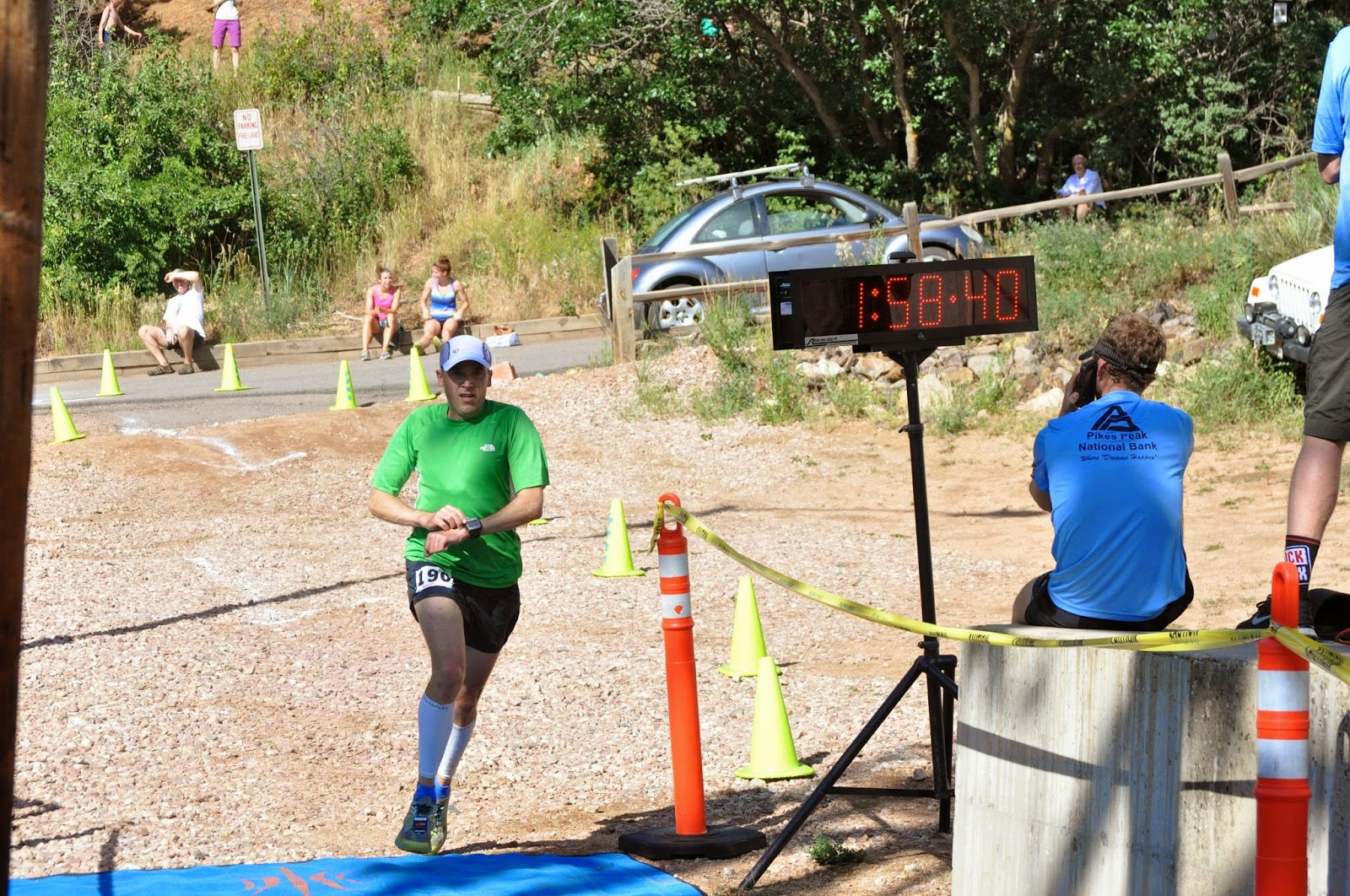 I ended up a good 5 or so minutes slower than where I really expected/hoped to be (and anticipated placing a bit higher in masters/age group), but I was 5 minutes faster than my 35 year old self from 2006 and was comforted by the fact that I gave it my best effort on the day, ran smart and metered my effort quite well.  If I have any regrets, it was the 2nd dinner I had at Chik Fil A at 9:30pm night before and waking up waaaay too early.  The late night fast food might have had something to do with the cramps (and poor sleep), not sure why I did this really.  I have a bit of work before the quickly approaching Pikes Peak Marathon in another month, but I feel that I am on track.  All in all a great time at a well run race.  A huge thank you to the organizers, race volunteers and fellow competitors, I can't wait to go back next year! 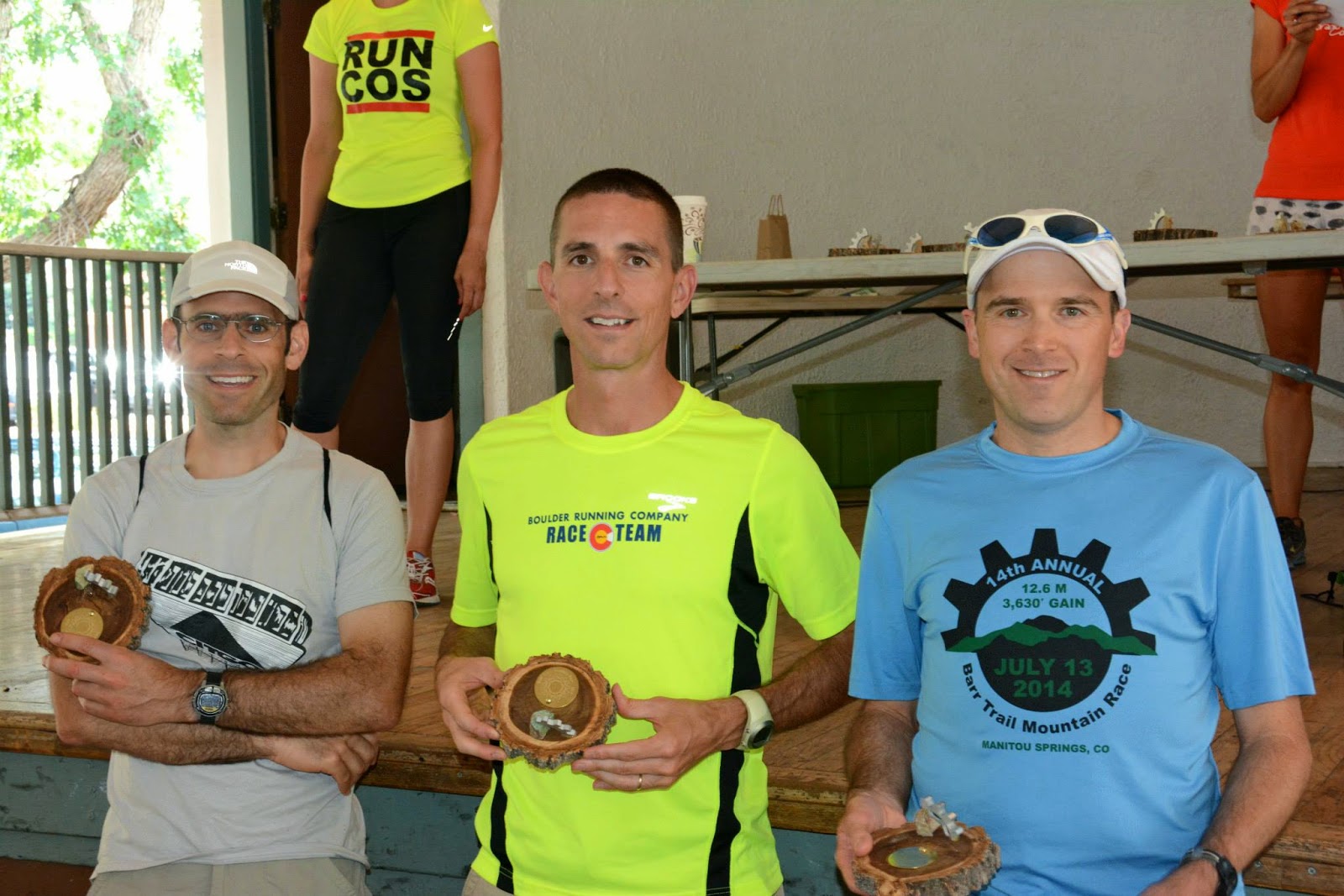 Notes (to self next year when I am reviewing):

Wore my Garmin watch, which I don't normally do, but I think it helped me stay on top of my effort vs. distracting me (which is what I fear and thus typically leave it behind for races).

Used the Hoka Huakas for this race.  They absolutely rocked, super light, great cushion and just enough traction for a highway of a trail like Barr.

I ate too much the previous night, much of it junk.  I need to eat smarter the night before and perhaps a little less the morning of for such a short effort.

I am not much into massages, but I was one of the first ones down to Soda Springs Park, so I took advantage of a free massage, compliments of Camino Massage Therapy.  I was on the table for what seemed like a good 20 minutes and felt much better afterwards, I would highly recommend them.