My good friend Kevin Lund has been putting on this great little snowshoe race now for 4 consecutive years on the Sourdough Trail, starting near the CU Mountain Research Station and North toward Brainard Lake.  This race was intended to fill the gap left by the disappearance of the Turquoise Lake Snowshoe race in Leadville a few years ago and Kevin has managed to increase the popularity a bit over the years (60+ participants this year vs. 25 the first year), yet the limit is 80 I think he said.  It is a small race, but he has some great prizes for everyone, entry is free (donations appreciated), is close to home and has some good competition.

Allison and I ran this race in 2010, where I placed 2nd, just 10 seconds or so back and had a fun time, but in 2011, we were way too busy with then 3 month old twins.  In 2012, I watched the girls while Allison and her friend Emily participated.  Though I had a great time in 2010, I am not particularly keen to race in January, but Kevin just signs me up before I have any say in the matter, along with Allison's encouragement for me to join her, I was committed.

After taking a few weeks mostly off after Thanksgiving due to being sick, which also happened to overlap a bit with a minor Achilles niggle, I have been getting outside reasonably often over the final half of December and the start of 2013.  Just the usual laps on Green, a trip to Bear, some loops on Sanitas, but I would not really call it training (do I ever really consider it training?), just hitting the trails with friends or Sierra and always going easy, moderate at most, continually reminding myself that “it is only January”.  My fitness has felt pretty spotty as a result, as some days I feel like I am defying gravity and could be close to very good fitness with a few weeks of focus, other days, I feel like gravity is conspiring against me.

In the days leading up to the race, I checked the start list once or twice and noticed a few fast names pop up and knew that I would have my work cut out to place well, but I just went in with an open mind, looking to enjoy the experience, see where I was at and see if I could run faster than last time.  Worst case scenario I would get a good workout and have some fun in the mountains.

I positioned myself near the front for the start and I was immediately shocked at the sprint across the parking lot, much quicker than the last time I ran this race, but there were more fast people here this time.  Once onto the wide trail, the pace hardly relented and I was gasping for air, not having been at a higher elevation than the Boulder peaks since Pikes back in August.  I checked my heart rate, figuring it had to be in the 180s, but was surprised to see 160.  I think I was in 9th or 10th for the first ½ mile or more, feeling pretty maxed out and I contemplated just stepping to the side to wait for Allison and run with her, but I knew that I would be ashamed of myself if I just gave up that easily.  I just worked on controlling my breathing and hoped that I would find some sort of a rhythm.  Still, I got passed a few more times, but as the gradient began to increase a little, I started to slowly pick people off one by one, some of whom seemed to have completely exploded.

Travis Macy leading it out fast. 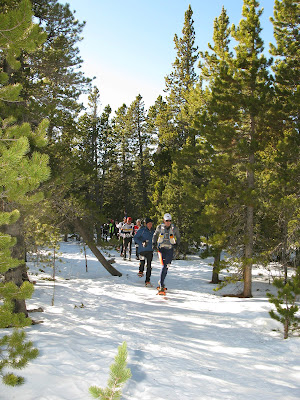 Me wearing all black.  Best to go stealth. 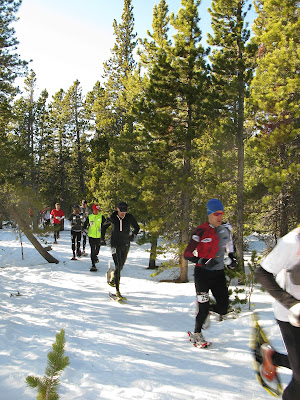 This helped my confidence a bit and I increasingly felt more in control and worked on maintaining the hardest tempo I could maintain for what I was hoping would be less than my 2:16 time from 2010.  One by one, I caught up to and passed all but 2 or 3 runners, 2 of which were often in sight, so maybe ~30 seconds up on me.  Aside from Travis Macy, I had no idea who was going onto the 30k or returning for the 11.6 miler.

As I approached the aid station/turn around, though I had not yet met him, I saw who I figured to be last year’s winner, Charlie Nowacki on the return and he gave me a friendly greeting and encouragement.  Things at the aid station went a bit slower than I had hoped, as I opted to not carry water and needed a cup to wash down the gel I had just taken.  I think we had gotten there a little faster than they expected (my split here was an hour even), where they had to scramble to get a cup from the back of the pickup truck, fill it, then hand it off.  It may have only cost me 30 or 40 seconds, but seemed like an eternity as I was now in full on pursuit for 1st place who was now over a minute ahead.

I took off for the return trip and was pushing at what felt like was my best effort, just completely in the zone and with laser focus.  I kept hoping to see Charlie along one of the longer straight-aways, but could not catch a glimpse.  When I passed Allison, still heading outbound, she told me that he was really close, but I had no idea whether that really meant in terms of minutes/seconds.  Was I gaining?  Maintaining?  Losing ground?  I just kept at it though, never settling, never looking back (though I knew there were some fast people hot on my heels), always riding that limit.  With about a mile to go, knowing the trail was now a wide highway and all downhill(ish), I poured out everything I had with memories of such a close finish in 2010 still fresh in my mind.  HR was now up close to 180 and my pace was often in the low 6 minute/mile range and even in the 5’s at times, which seemed particularly fast on snowshoes.  The last bit seems to go on forever...  I kept thinking the finish had to be around the next corner and I was happy to finally see the parking lot/finish line, where both Kevin and Charlie gave a simultaneous high five as I crossed the line.

Charlie had finished about 2 minutes ahead of me in 1:51 and alhough I was slightly disappointed to finish 2nd again, I was happy to have turned things around after feeling like quitting and I also knocked a whopping 23 minutes off my time from 2010 (though some of that improvement is simply due to faster snow conditions this year).  I also felt quite satisfied that despite my relatively low fitness level this time of year and lack of practice running with snowshoes (only my second time ever) I was able to pace myself well, exercise patience, persistence and felt as though I gave my best effort.

Me, Charlie and Kevin 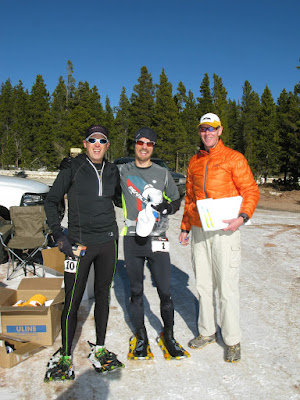 I later learned that finishing behind Charlie is nothing to be ashamed of, as he is no slouch at this stuff and is training for the upcoming Snowshoe National Championships, where he is aiming for top 10 finish (was 19th last year).  He is also a super nice guy and has quite the friendly sportsmanlike demeanor (not sportsman like hunting animals on a ATV, just very humble a gracious).

Post race was a blast, chatting with friends, making new acquaintances and hanging out on a perfect sunny day in the mountains.  I had changed and was preparing to head back to run with Allison for a bit, but she finished quicker than I expected in 3:07 and was 2nd place woman (I think), about an hour faster than she has run over her past 2 races here.

Allison finishing strong, nearly an hour PR here for her. 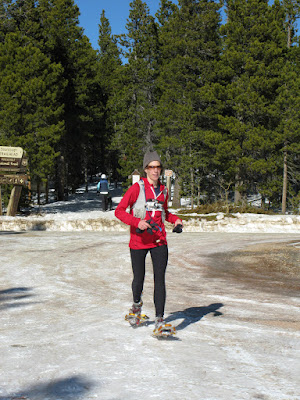 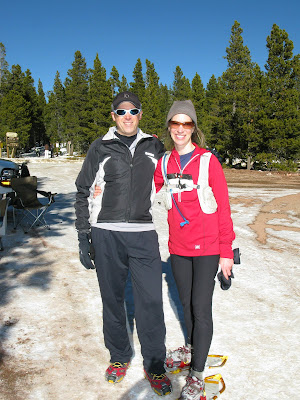 My only complaint was that there is no Masters classification!  I easily had that in the bag, so I'll have to keep bugging Kevin about that one ;).  All in all a great race and I would highly recommend it, even if you are not a snowshoe racer (I certainly am not).  Would love to do more snowshoe racing though, it is pretty dang fun.

Posted by Jeff Valliere at 6:58 AM