I recently learned that OSMP lifted the leash restriction on the Fern Canyon Trail from the Mesa Trail junction to the summit of Bear Peak.

When there is a leash restriction on any given trail, to me this means that the trail is essentially closed to us, as it is nearly impossible for Sierra and I to have a good time (especially on a trail as steep as Fern), as she is not much of a leash dog and I am not at all a leash dog runner.  It may work for some, but not for us, as she has pretty much spent her entire 10 years off leash (aside from city/neighborhood stuff).  Occasionally I chance it depending on the trail and time of day, with my head on a swivel, but that really takes away from the enjoyment.

So, with Fern Canyon back as a legit option, Sierra and I got out for a very casual lap on Bear this morning to enjoy the snow and get in some quality time together on one of our favorite trails of yore.

There was at least a foot of fresh snow, with a set of tracks ahead of us (up/down it looked like), so the going was pretty slow with a lot of slipping, stumbling and wallowing.  From the saddle to the summit, I probably got 50% extra vertical due to all the slipping.  Microspikes went on and Microspikes came off multiple times, sometimes they helped a little, but mostly did more harm than good with all the balling.

All the way to the saddle, I was overdressed and was wishing I had worn shorts and a lighter shirt setup, but then above, I was pretty darn cold, as I was soaked from the snow, the temp was probably in the low 30's or even upper 20's and I was moving slow.  Not to mention there was a dark grey cloud conveniently parked right over the peak that made it feel quite wintry.

Not sure what it was that they were worried about in Fern Canyon a few years ago to prompt them to make it leash only and what specifically has changed over that period of time, such that it is now OK for dogs to be off leash.  Both Sierra and I observed closely, but perhaps it is buried in the snow. 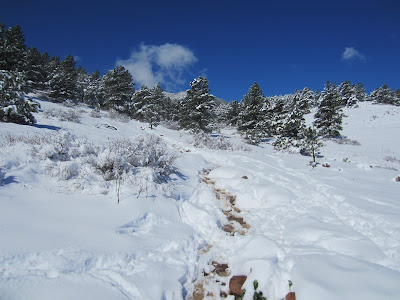 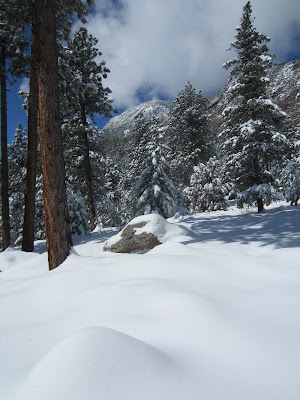 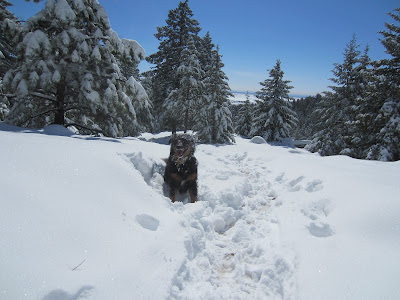 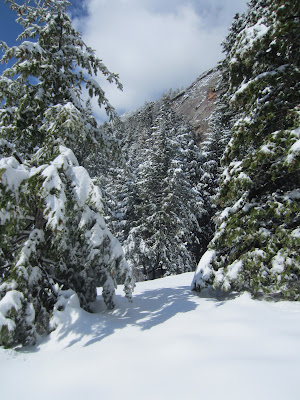 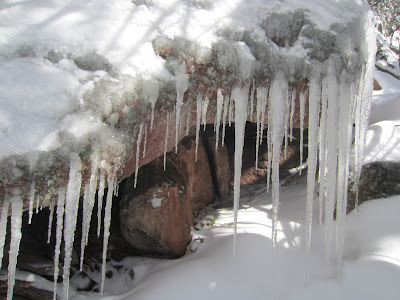 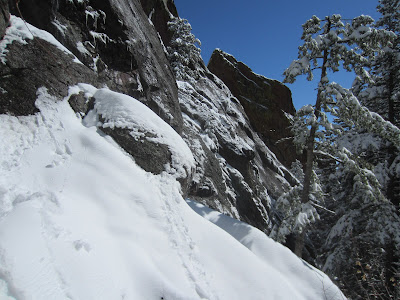 Serious balling, this was not even the worst of it 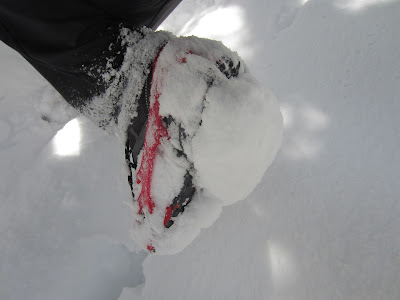 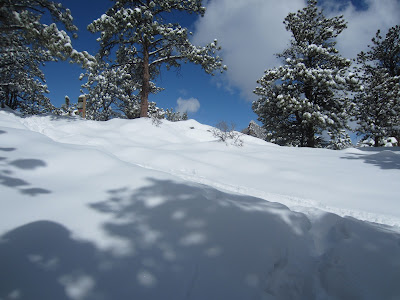 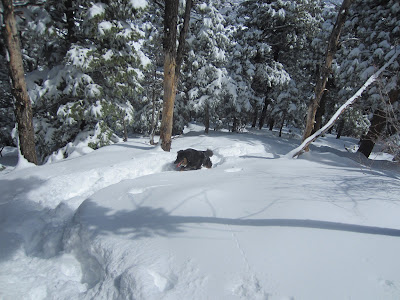 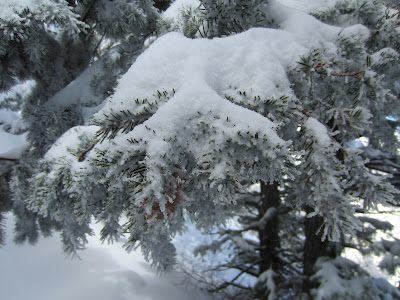 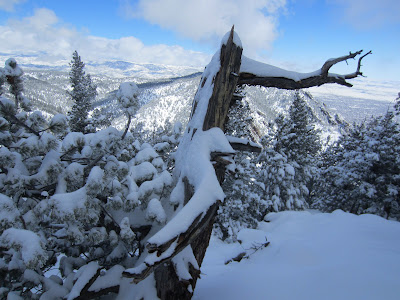 Is this May or December? 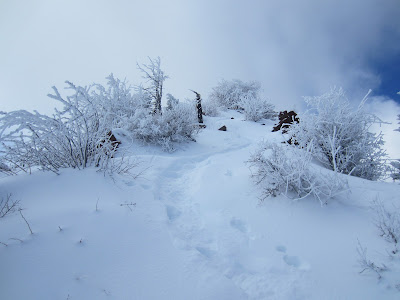 Yet another new sign on the trails, awesome.  I have to wonder if one who is ignorant enough to deface rocks and trees, is cognizant enough to observe and obey such signage? 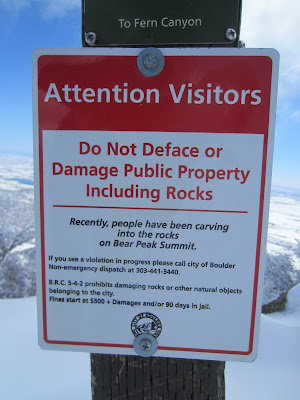 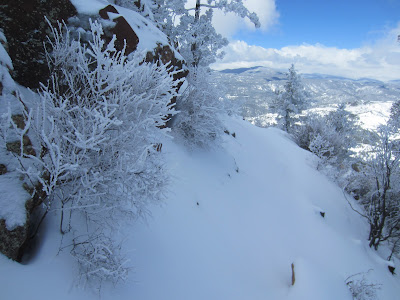 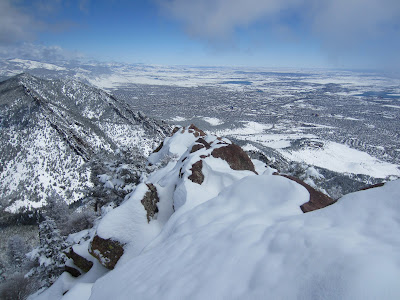 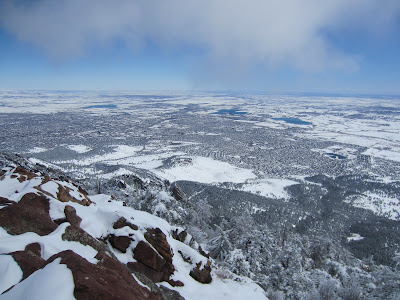 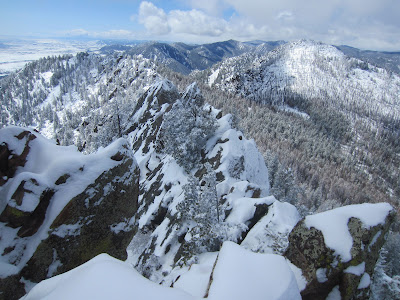 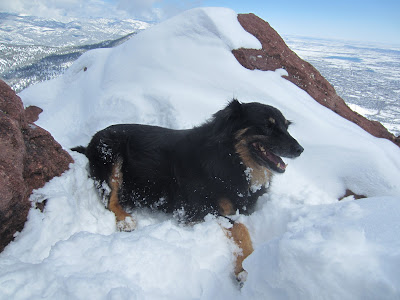 Frozen bell bottom cuffs.  Gaiters would have been a wise choice today. 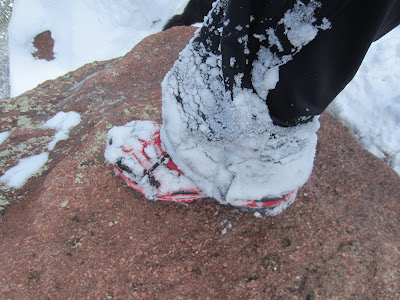 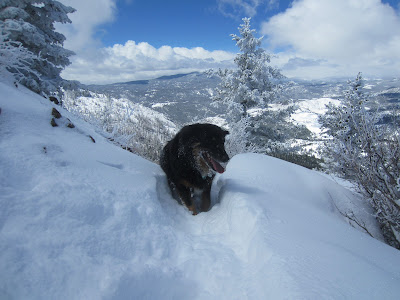 On the descent, Sierra was attacking the fresh lines through the steep and deep just like a powder skier, almost submerged with a huge grin on her face.  It was awesome and I was so happy to be enjoying the day with her. 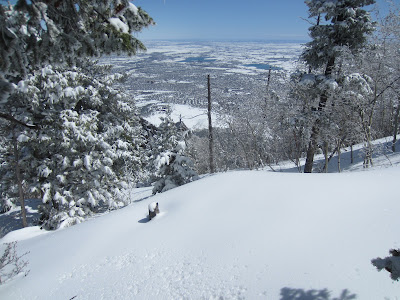 Posted by Jeff Valliere at 3:02 PM