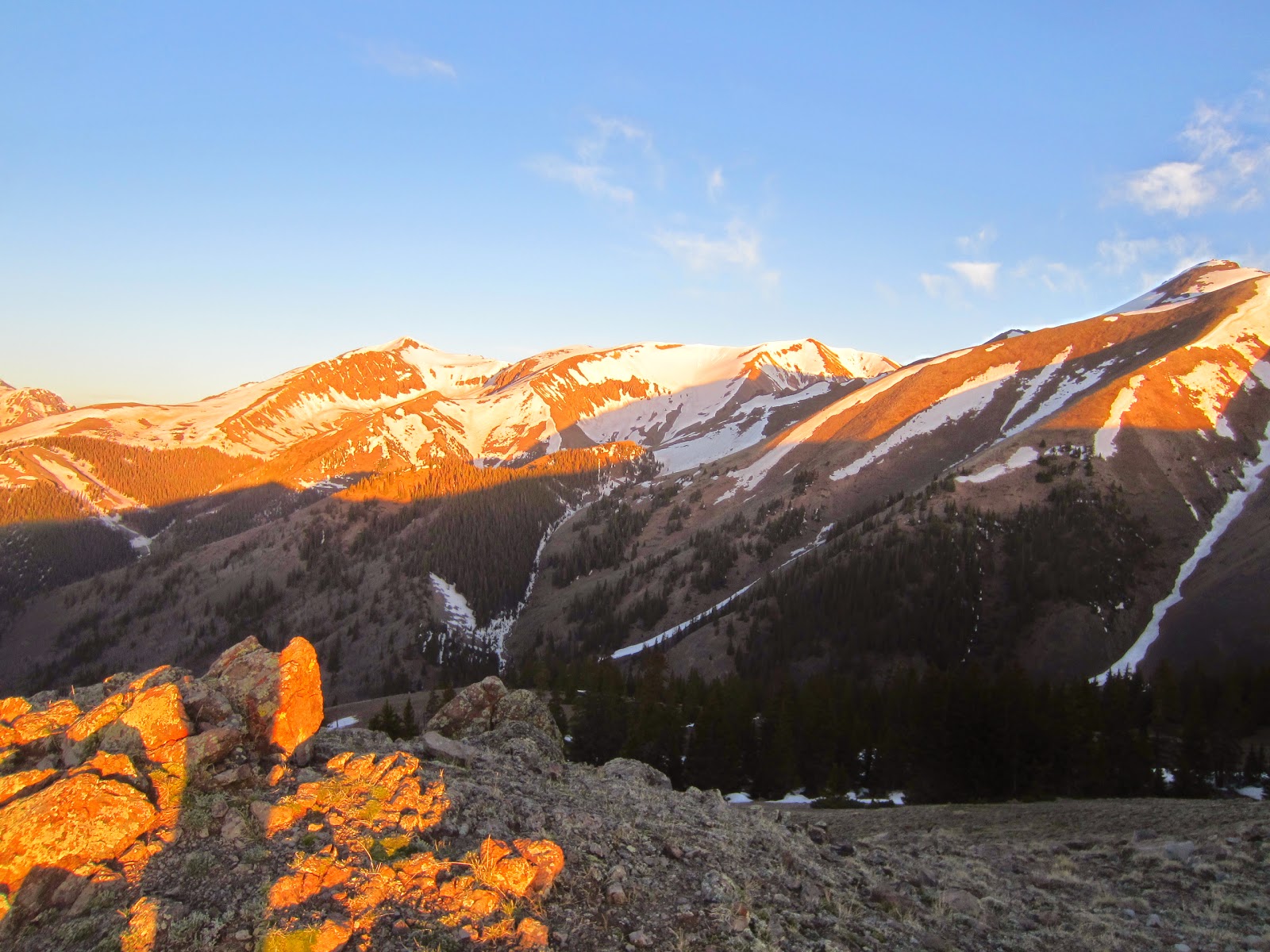 I knew that being on a family vacation for a few days in Lake City would be a mixed blessing.  On one hand, it is a beautiful area with lots to see and do, but is simultaneously tortuous not being able to just go nuts and tackle every peak in sight.  I packed a bit of extra gear for this trip (Microspikes, a good flashlight  and my Ultimate Direction AK vest), just in case I was able to fit in a short outing and as luck would have it, I found a narrow window of opportunity on Monday morning.  I debated what to do, as I really wanted Sunshine/Redcloud for my very slim 14er x 2 list and scoped out the Winter route from the Mill Creek campground.  This looked great, steep and free of snow, but I suspected it might be a bit tedious and perhaps time consuming navigating the initial steep section through the minor cliff bands in the dark, as efficiency would be key.

I have also been looking forward to climbing Centennial Un-named Pts. 13,832 and 13,811 for some time and after doing a little research, found that there is a good trail to treeline from the Williams Creek TH and figured these would fit well with my limited time.  If I got started early enough and went fast enough, I may be able to tack on Redcloud also.

Awoke at 3:40am, was out the door at 4am and drove slowly to the Williams Creek Trailhead, eating my breakfast and dodging deer standing in the road.  Got started at 4:37am and felt good, but I am a bit of a slowpoke in the dark and I struggled a bit to maintain what seemed like a reasonable pace, casually jogging the flatter sections and power hiking the shorter steeper pitches.

The first smaller creek crossing was flowing good, but there were a few logs to skip across which made it easy.  I knew there would soon be a second creek crossing and had noticed a note in the trail register stating “DO NOT ATTEMPT TO CROSS THE SECOND CREEK”, which I passed off as an exaggeration, but knew it might be an indicator that I would be getting wet and or cost me precious minutes.

I reached the 2nd creek 11 minutes in and it was flowing quite high with no bridge or logs to hop across, so I bushwhacked upstream and downstream, but found no way across without getting wet.  I tried dragging a few logs, but moving and positioning one large enough to span the creek seemed like more work than it was worth.  After 5+ minutes of this, I finally just decided that to get across, I would have to dip a foot.  Fortunately, I made a last minute decision to wear my La Sportiva Crossover GTX (Gore Tex with built in gaiters), which turned out to be a great decision for the day.  Despite the deep plunge (I nearly made it), my foot was perfectly dry on the other side.

Creek crossing on my return trip. 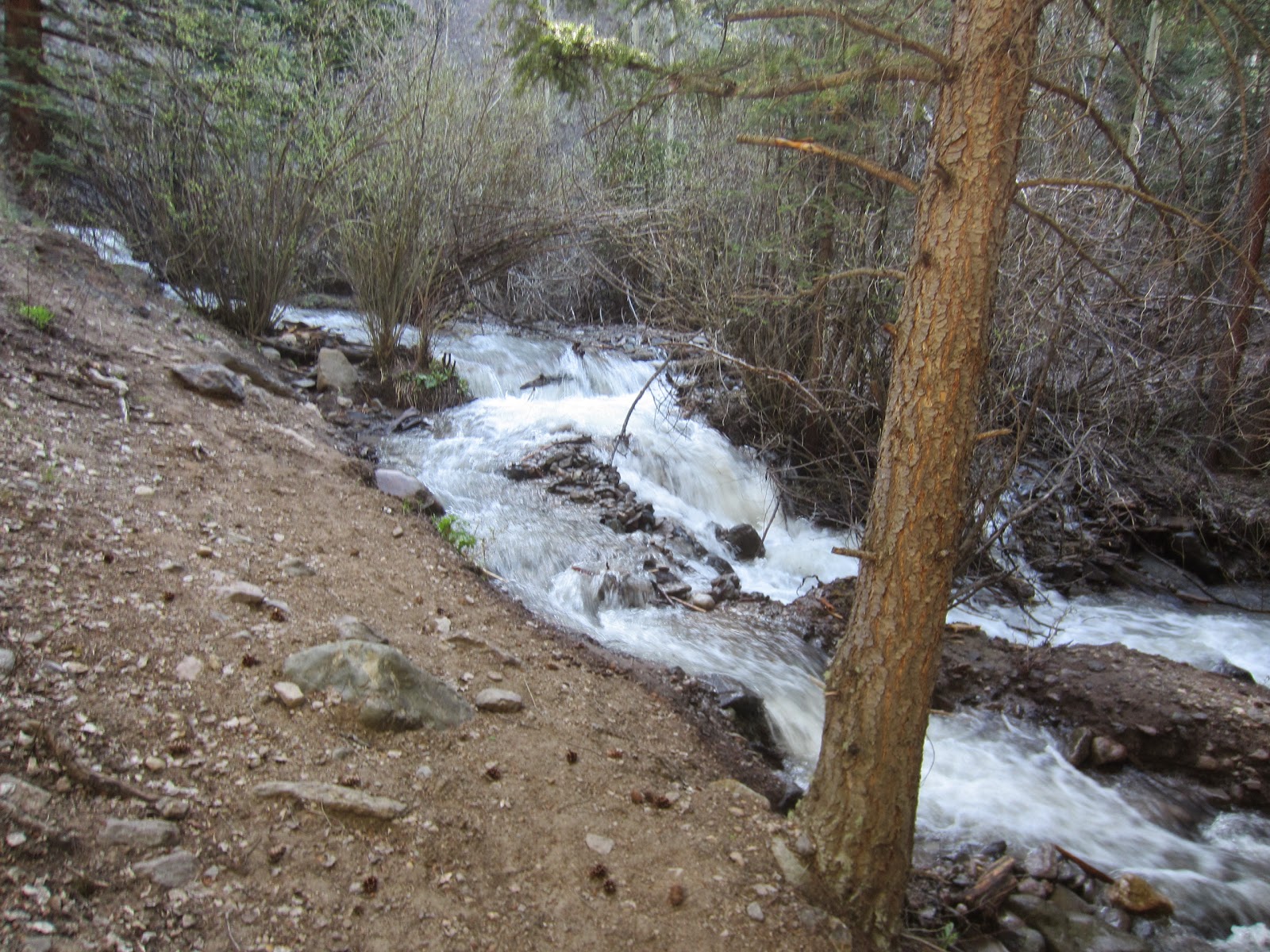 The trail beyond was excellent and made for easy cruising.  I finally packed away my light a little after 5:10am, as the trail steepened, my pace slowed a bit and the faint morning light became just enough to see.  It seemed to take forever to reach treeline, but I was happy to not really encounter any snow, aside from some avoidable patches, or solid snow that I could walk across.

This trail is awesome, buffed out single/double track with amazing scenery (pictures taken on the descent) 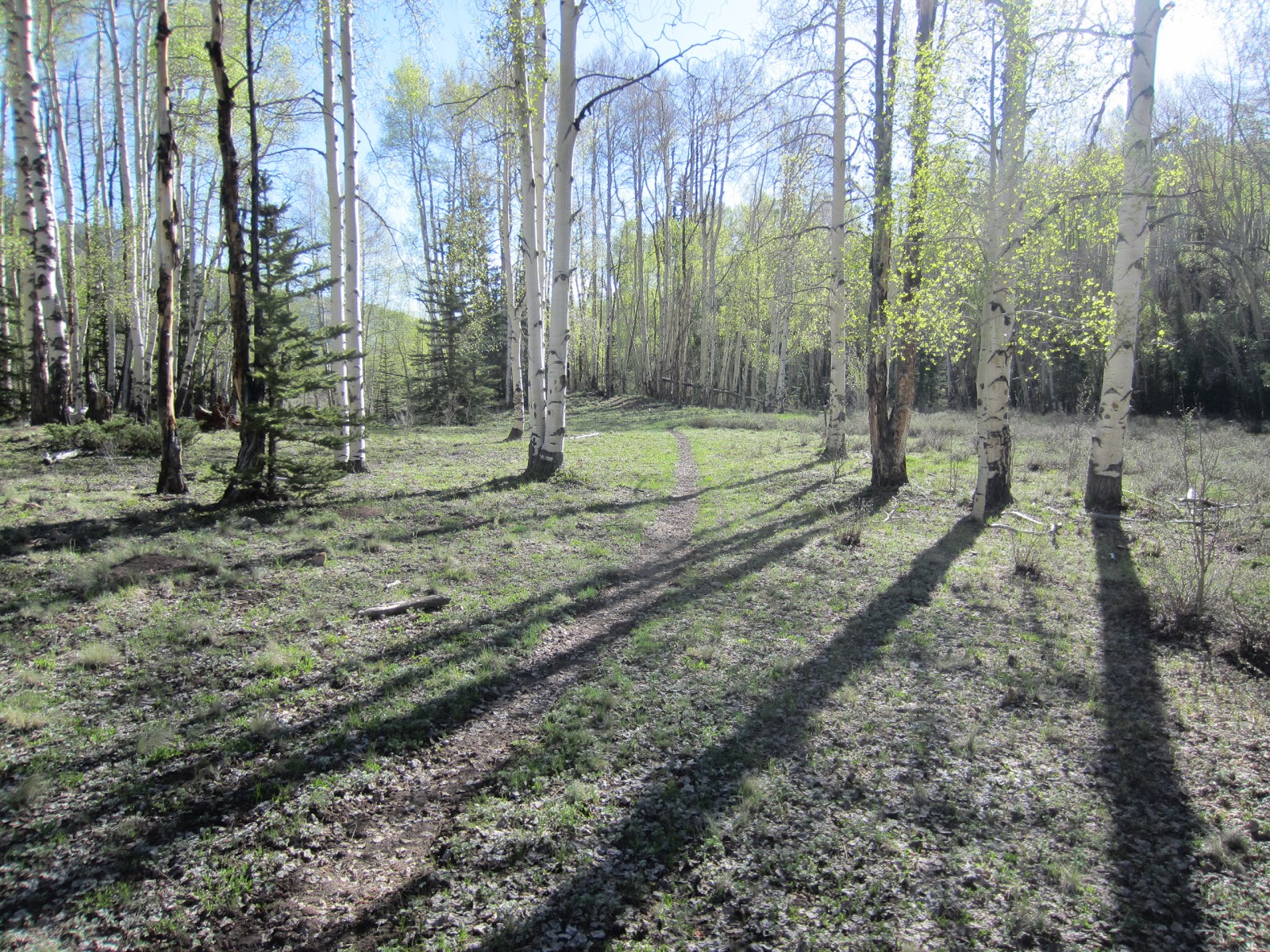 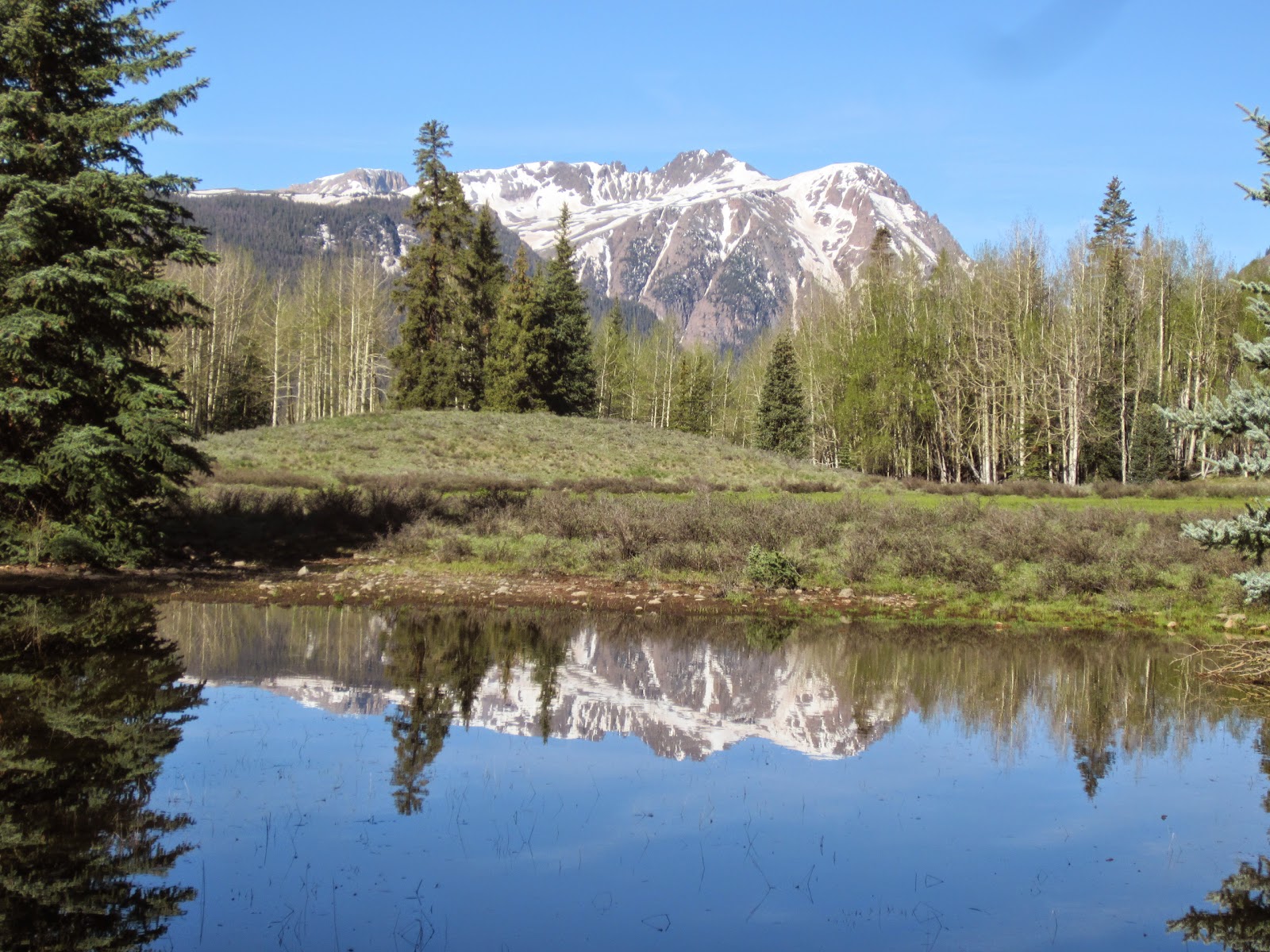 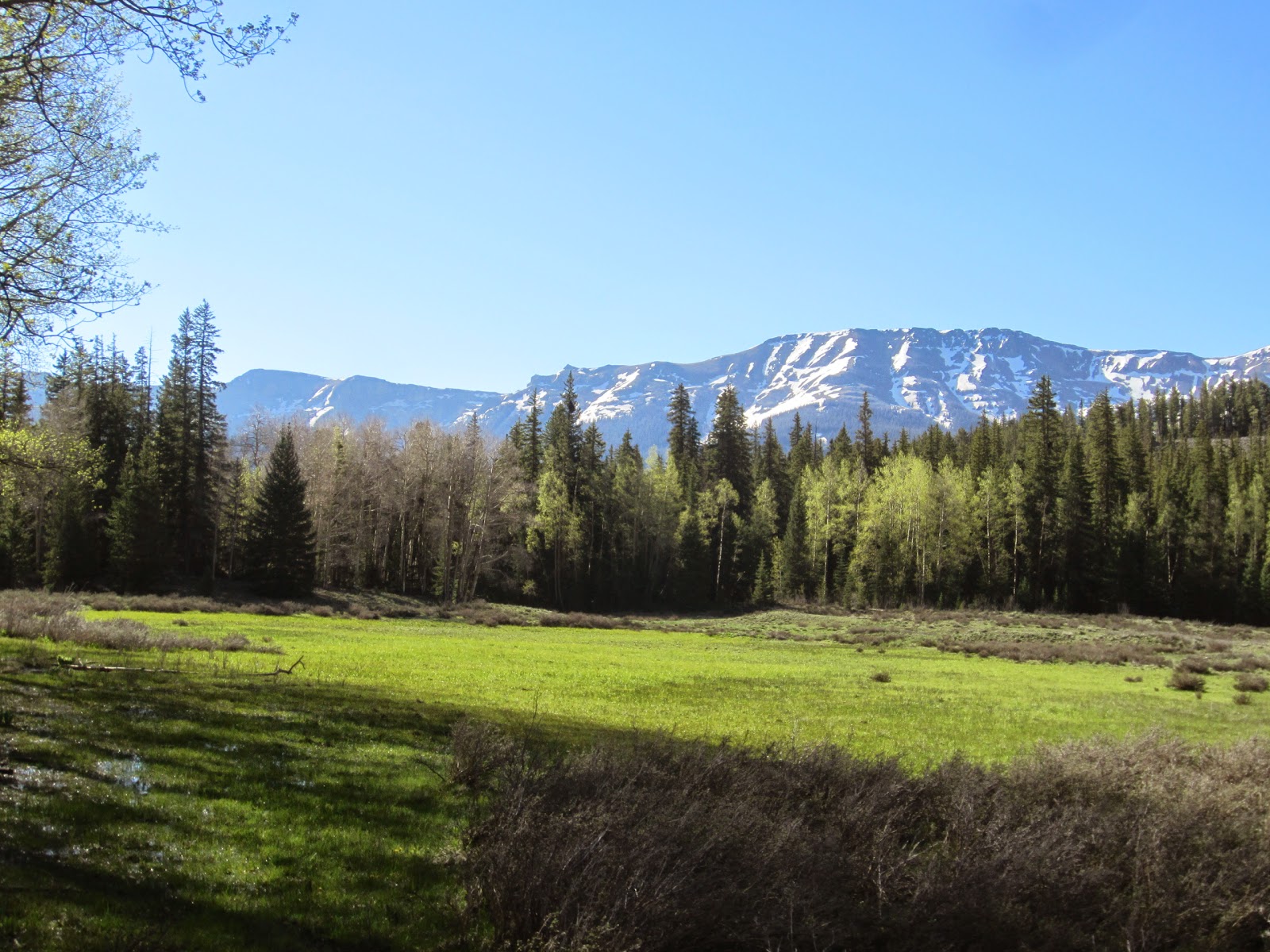 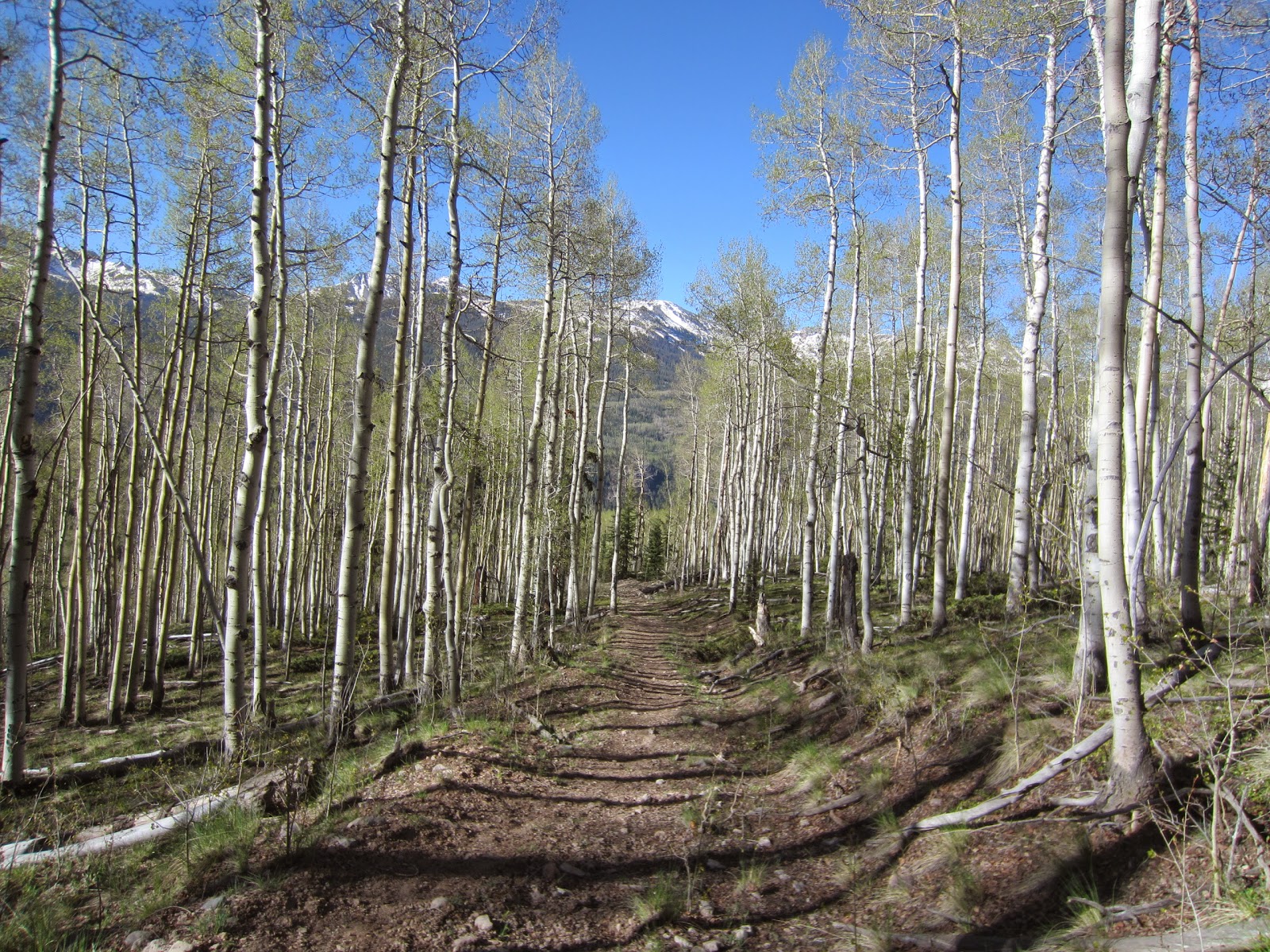 Once I hit the open, solid, snow covered slopes above treeline, I put on the Microspikes and following Roach's description, aimed for point 13,632, which lies in between the two summits.  Having not been above treeline since my December climb of Evans with Homie, I just plugged along, never really pushing, but never letting up either aside from the occasional photo op.  I was surprised to not be sucking too much wind, feeling reasonably good considering (though my time/pace indicates that I have a good bit of acclimating to go).  I think I was just enjoying myself so much, that I didn’t even think of much else, other than the views and how happy I was to be above treeline, in the San Juans, in June.  It does not get better than this. 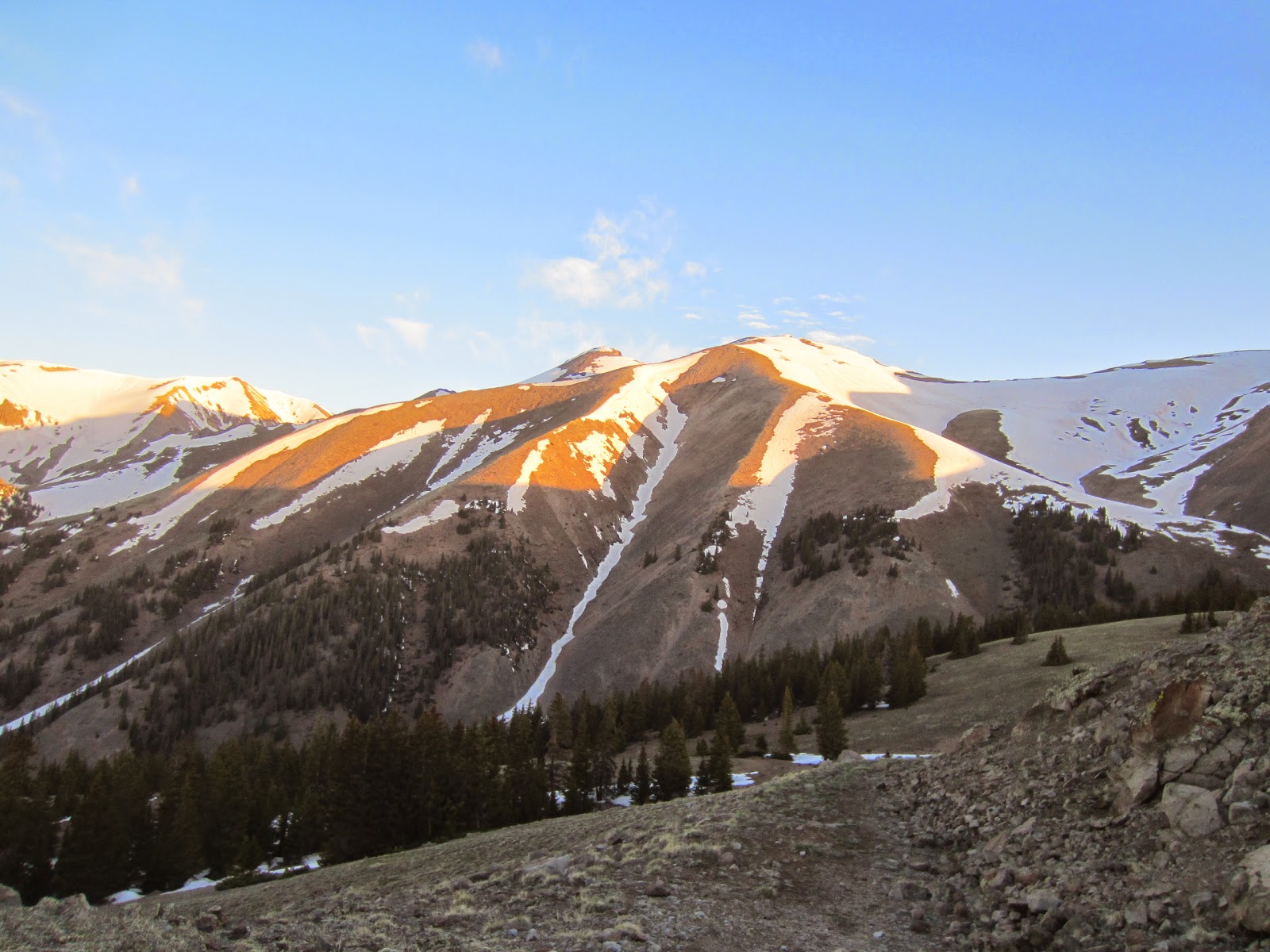 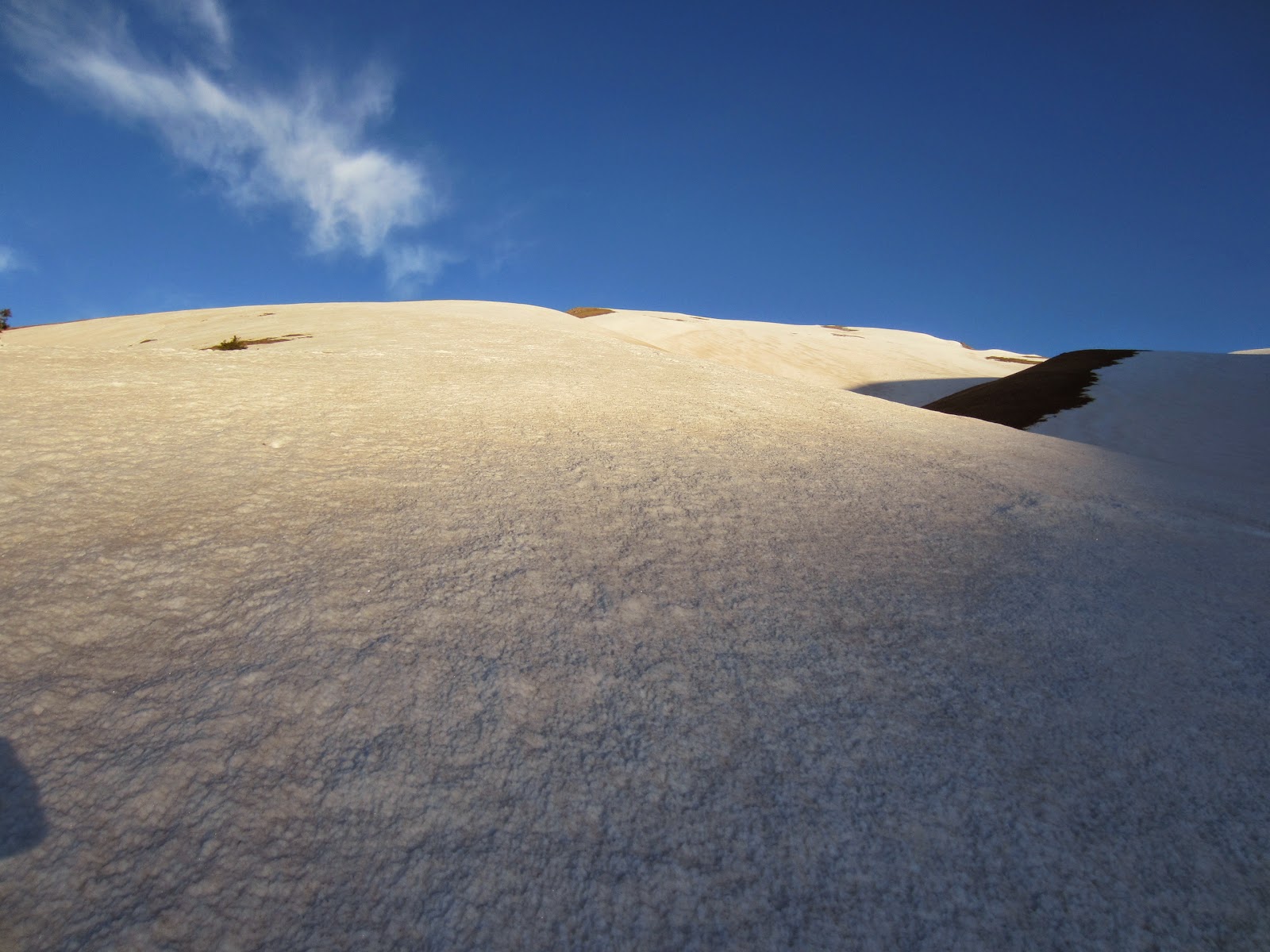 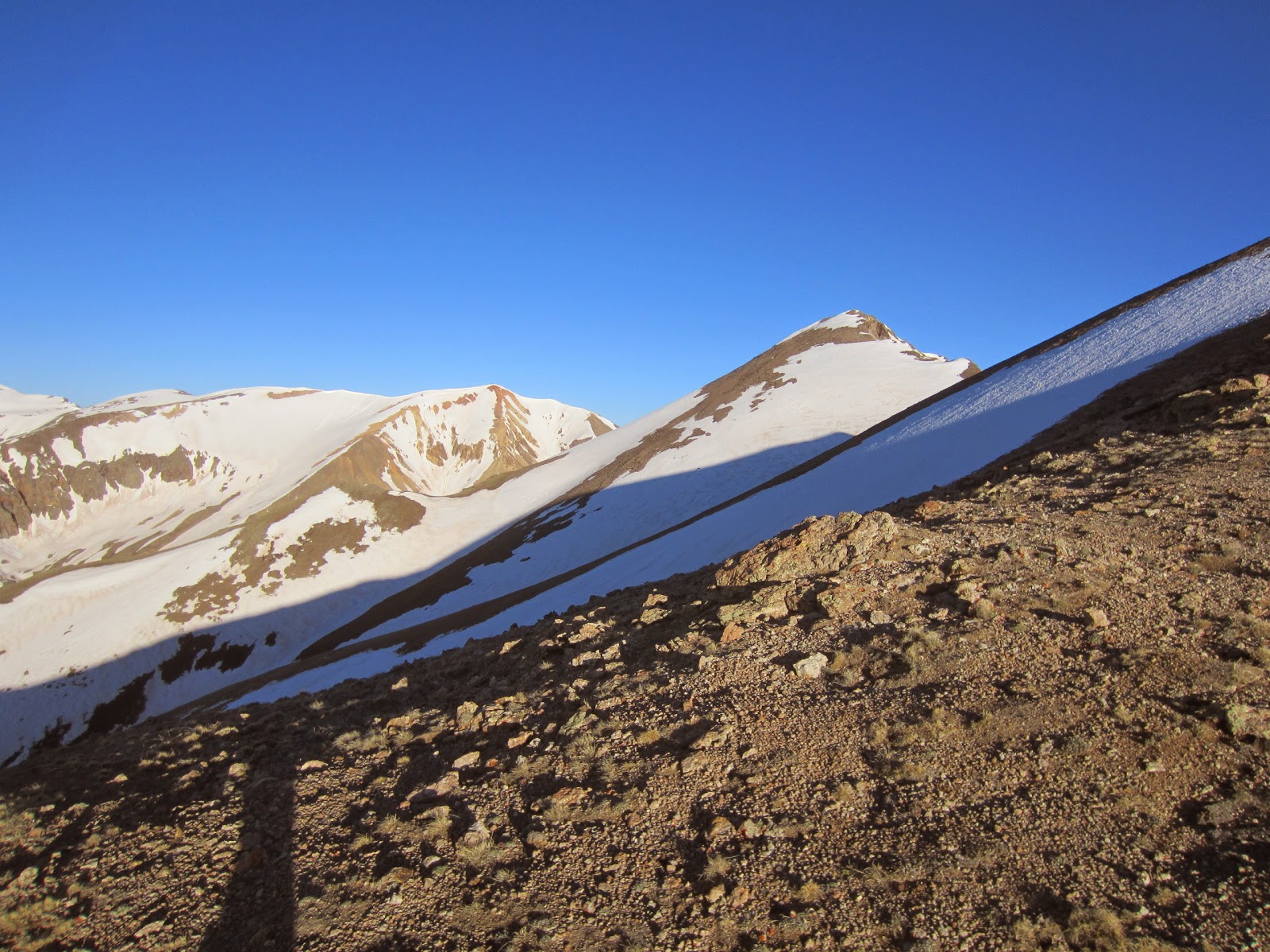 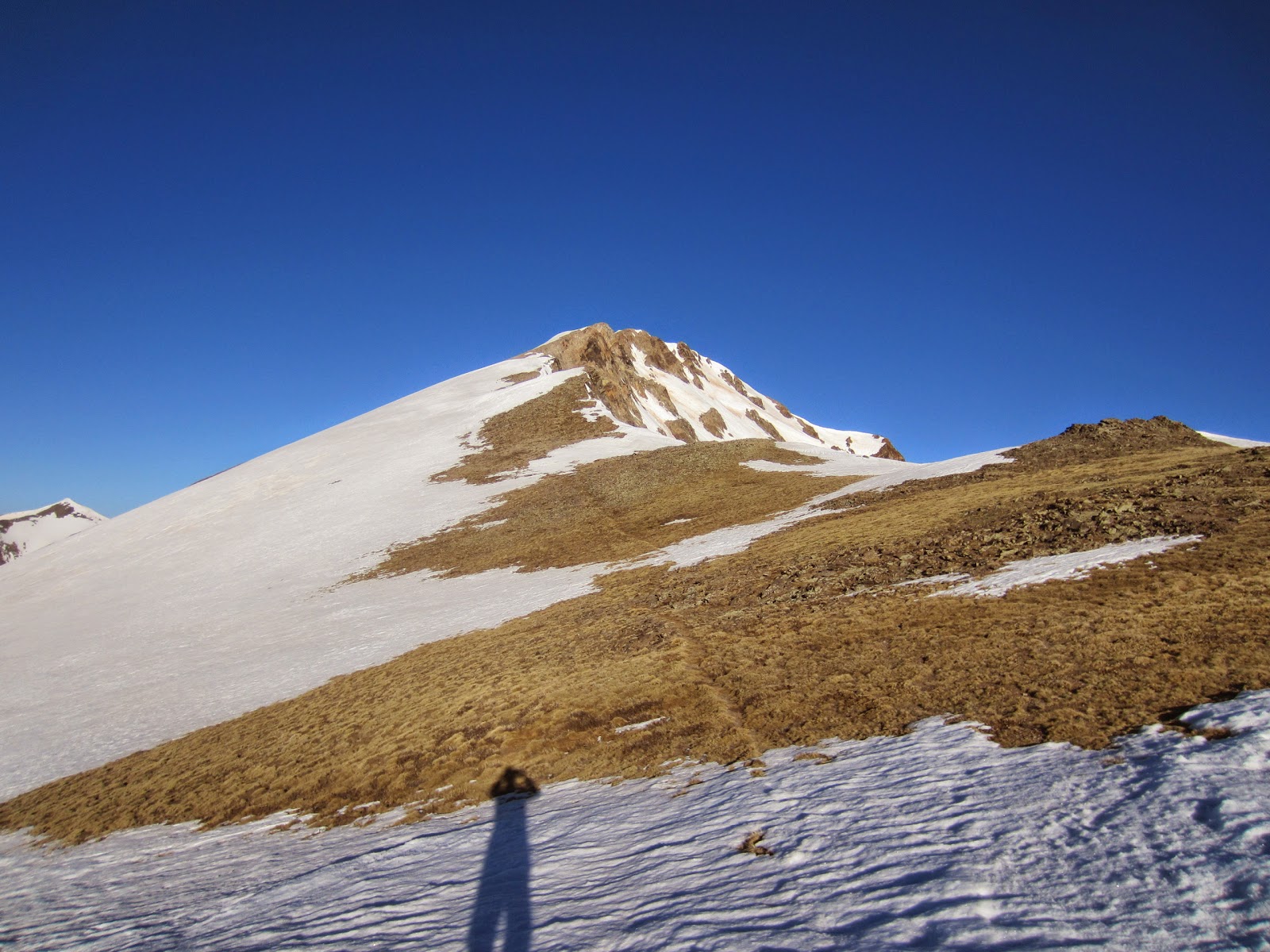 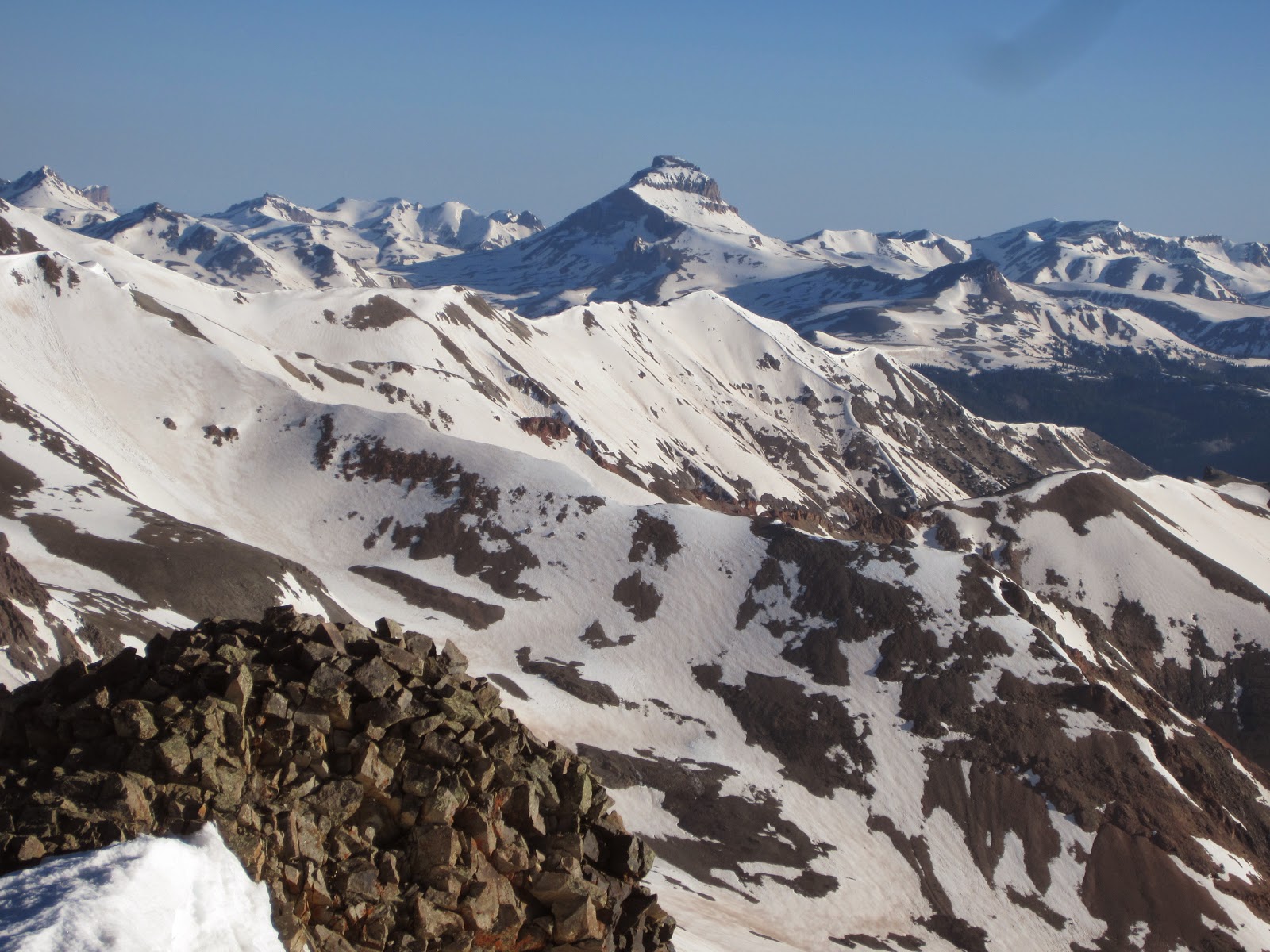 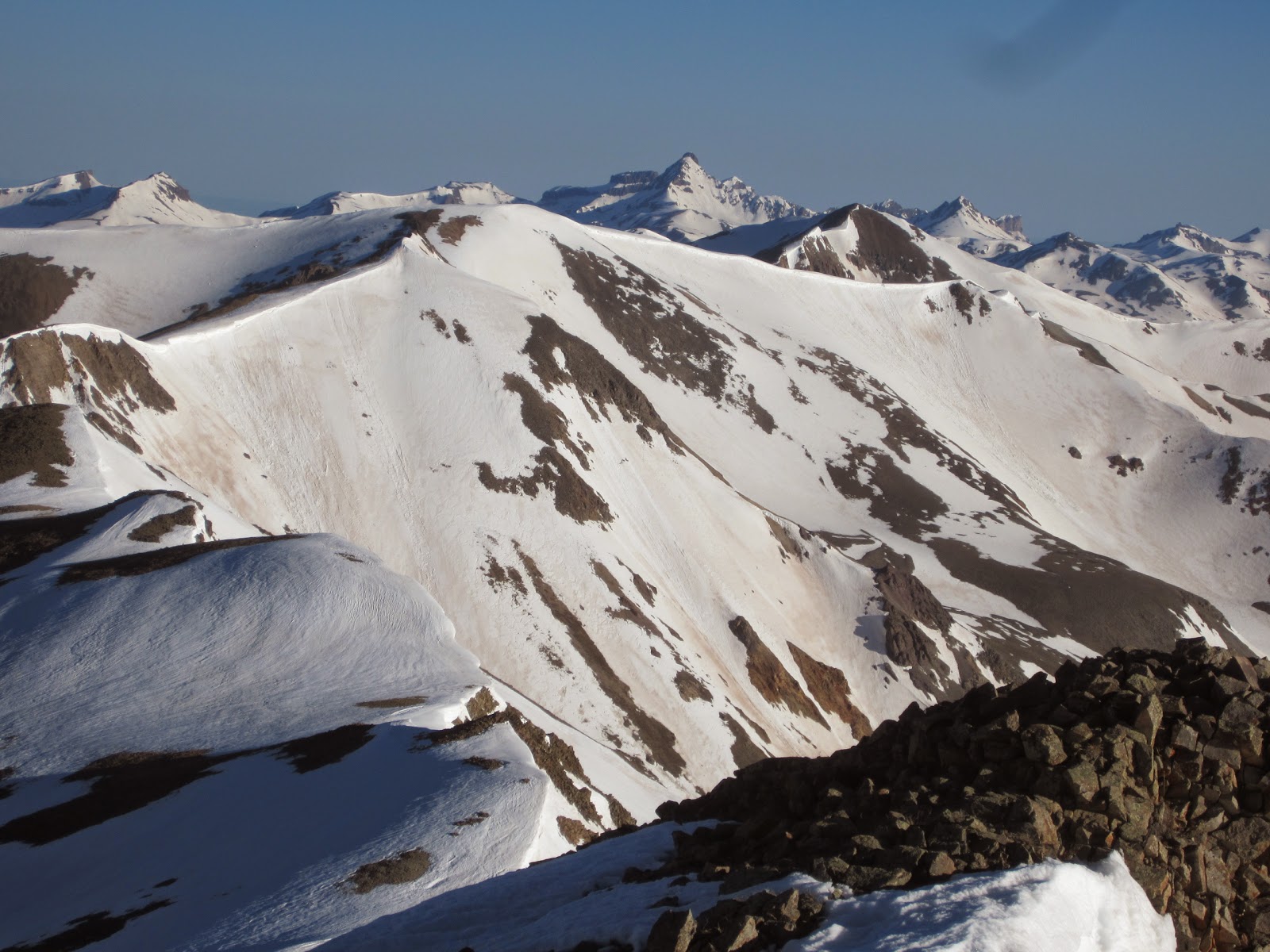 Still some good snow up high, but it is game on in the San Juans 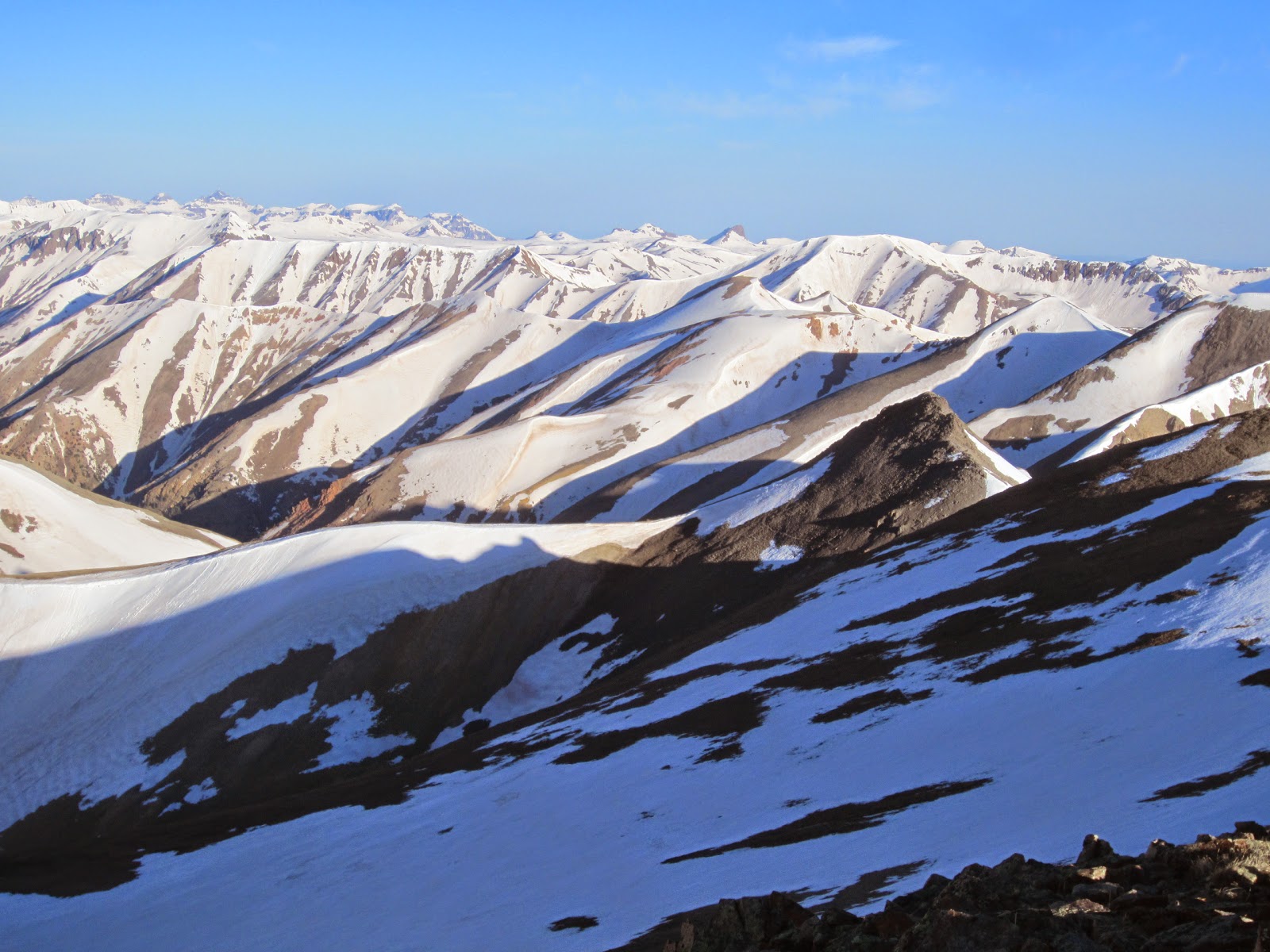 I arrived on 13,832 after 2:29 and spent just a few minutes taking some photos and sucking down a gel, before heading East toward 13,811, which is 1.4 miles away.  I felt great and momentarily considered pushing on to Redcloud, but I knew that going there, with the return vertical would have me a bit late returning to the family. 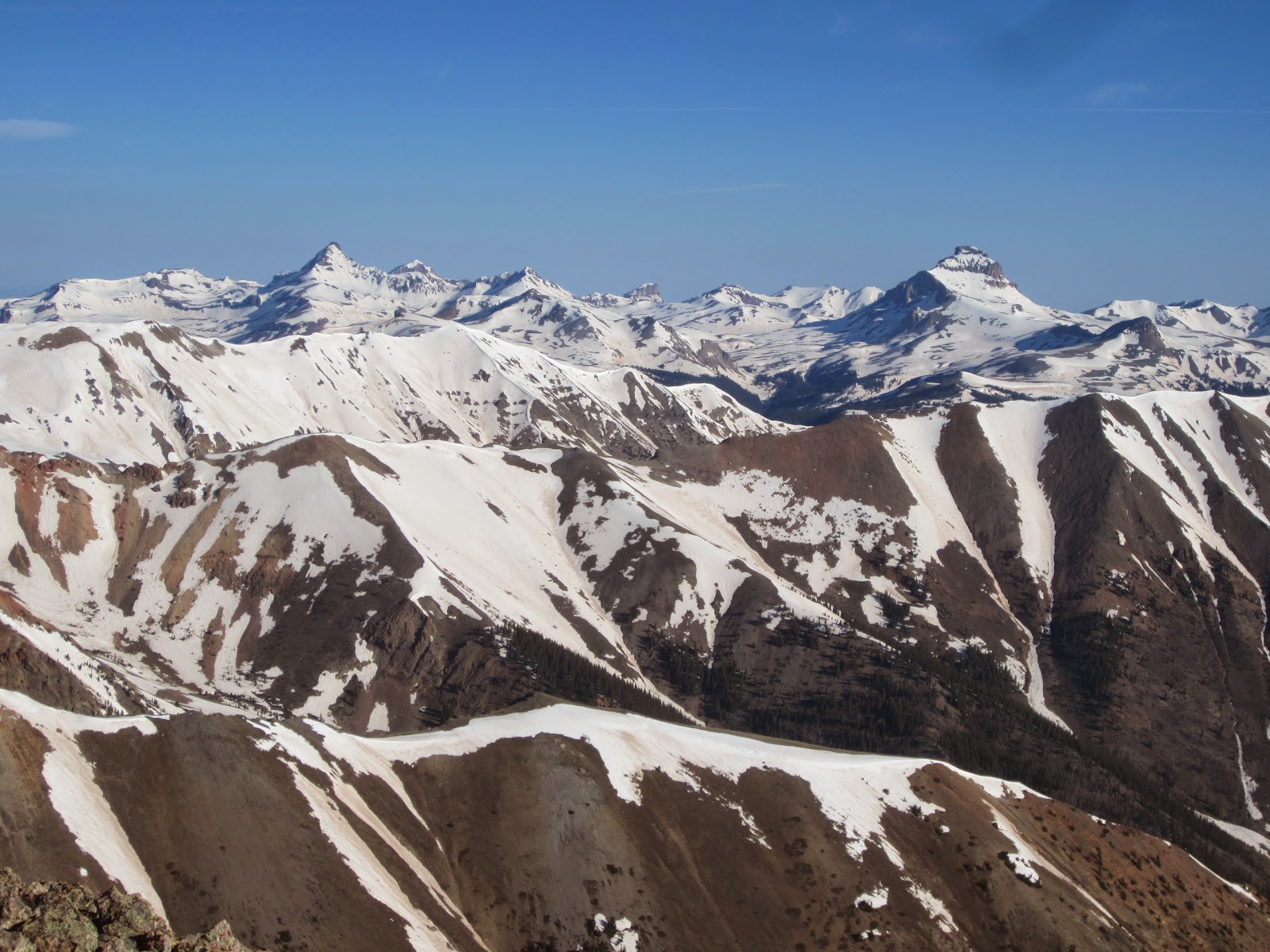 Though helpful, but not entirely necessary, I kept the Microspikes on much of the time for the snow above treeline, yet on occasion felt compelled to remove them, which cost a bit of time.  I am not entirely sure whether or not the snow helped or hindered my progress, as I was generally pretty careful on it, not wanting to take a slip, or plunge in too deep (it is pretty quiet out there on these non 14er peaks, early season on a Monday morning).  I think overall it may have cost me some time, but it did make for enjoyable walking for the most part. 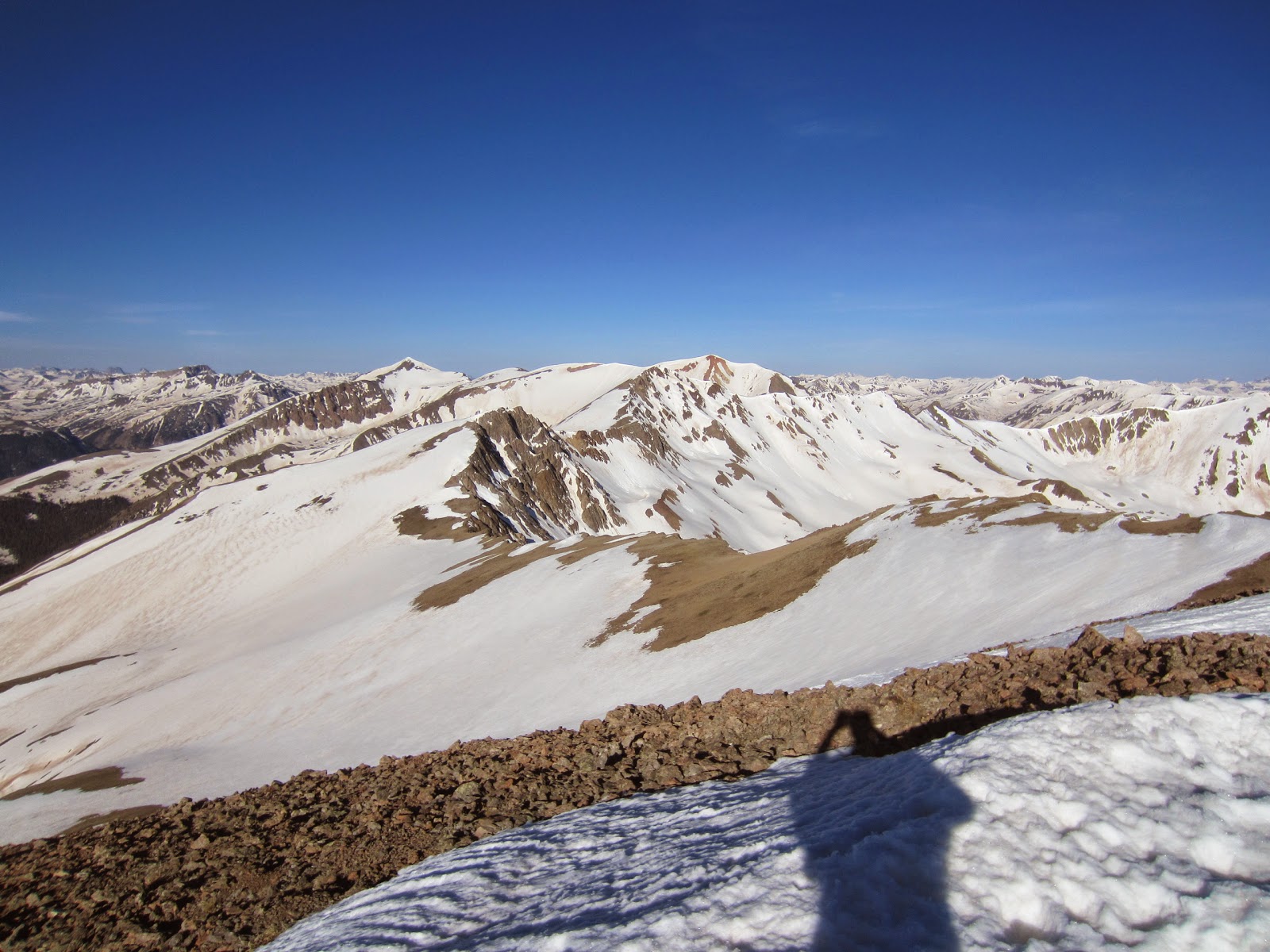 The summit of 13,811 arrived 35 minutes later (3:04 elapsed), I took a few minutes here for photos, soaking in the views and another gel, then got boogying down the upper snow slopes.  It was not too steep, but it was frozen and I would have been a bit more confident with an axe, so I took it pretty slow and easy until I reached the grassy ridge and less steep snow.  From there, it was off with the spikes and was all fun cruising on the way back down, where I finished up just before 9am (4:19 total).  Though a moderate effort, I figured this would take me closer to 3 hours, 3:30 tops, but the tough creek crossing, snow, stopping for photos and lack of acclimatization made things a little slower than I thought.  Plus, how could I hurry too much and not enjoy it a bit?

Cruising down this gave me the biggest grin and I may have let out a few loud joyous cheers. 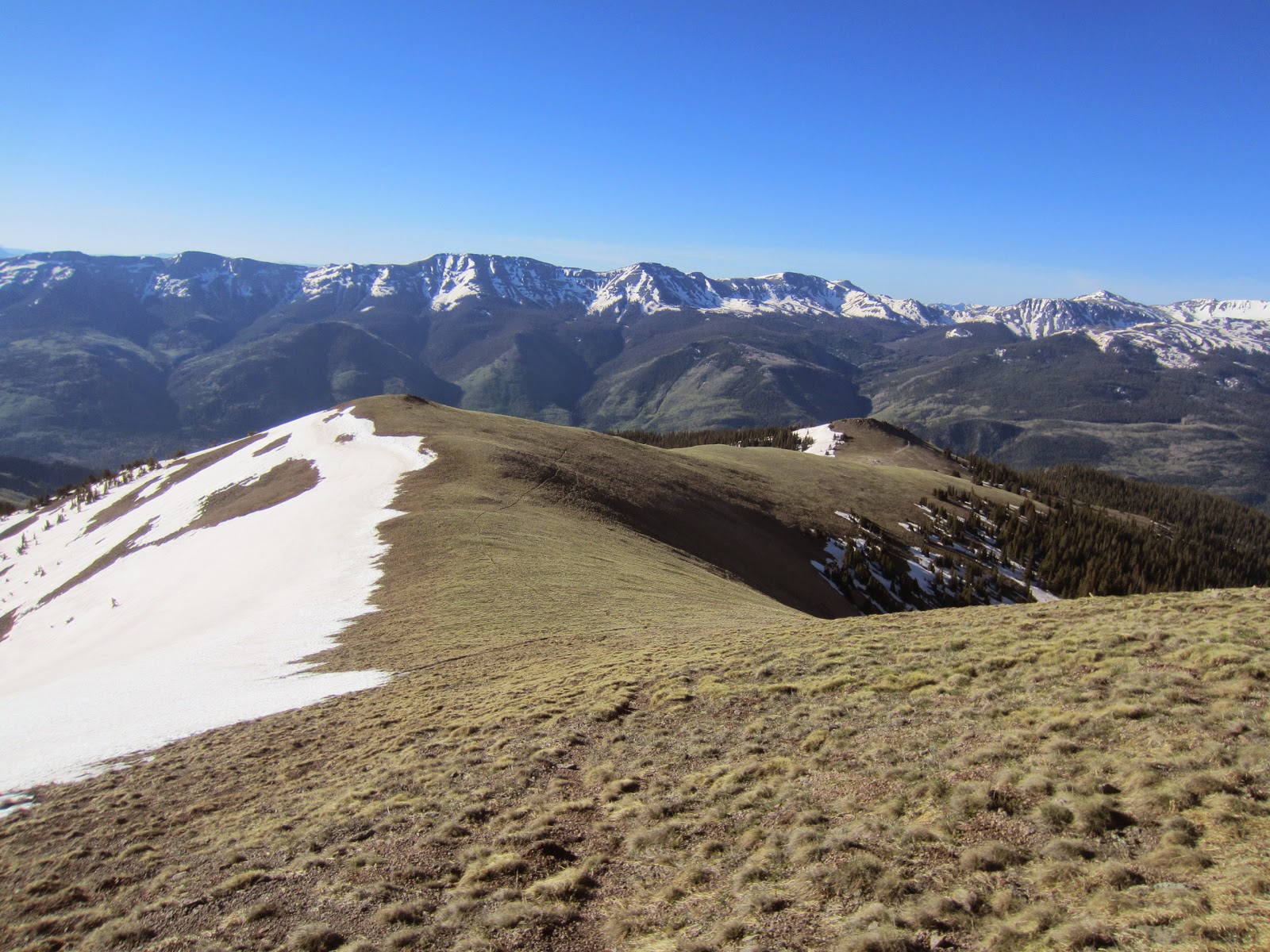 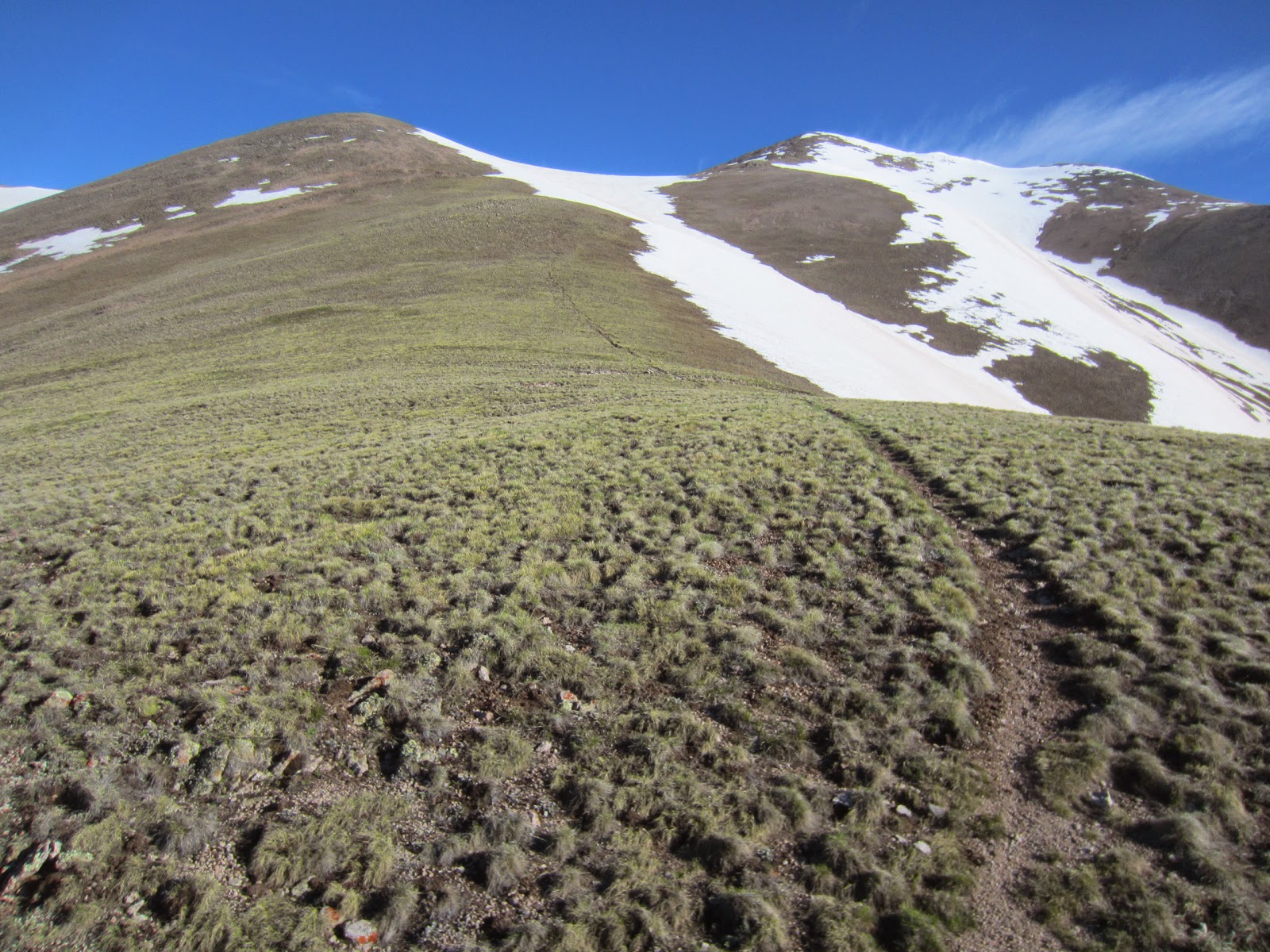 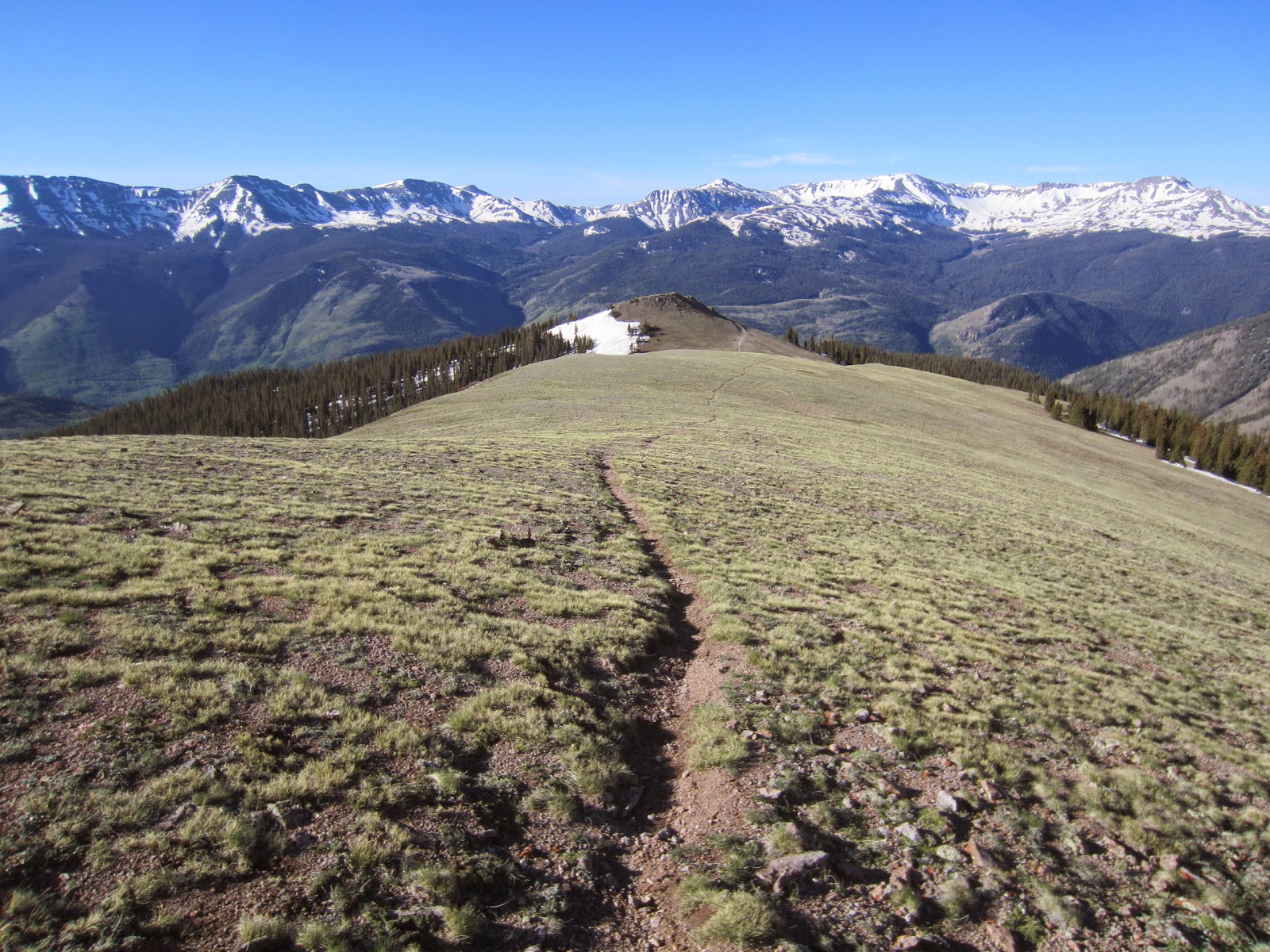 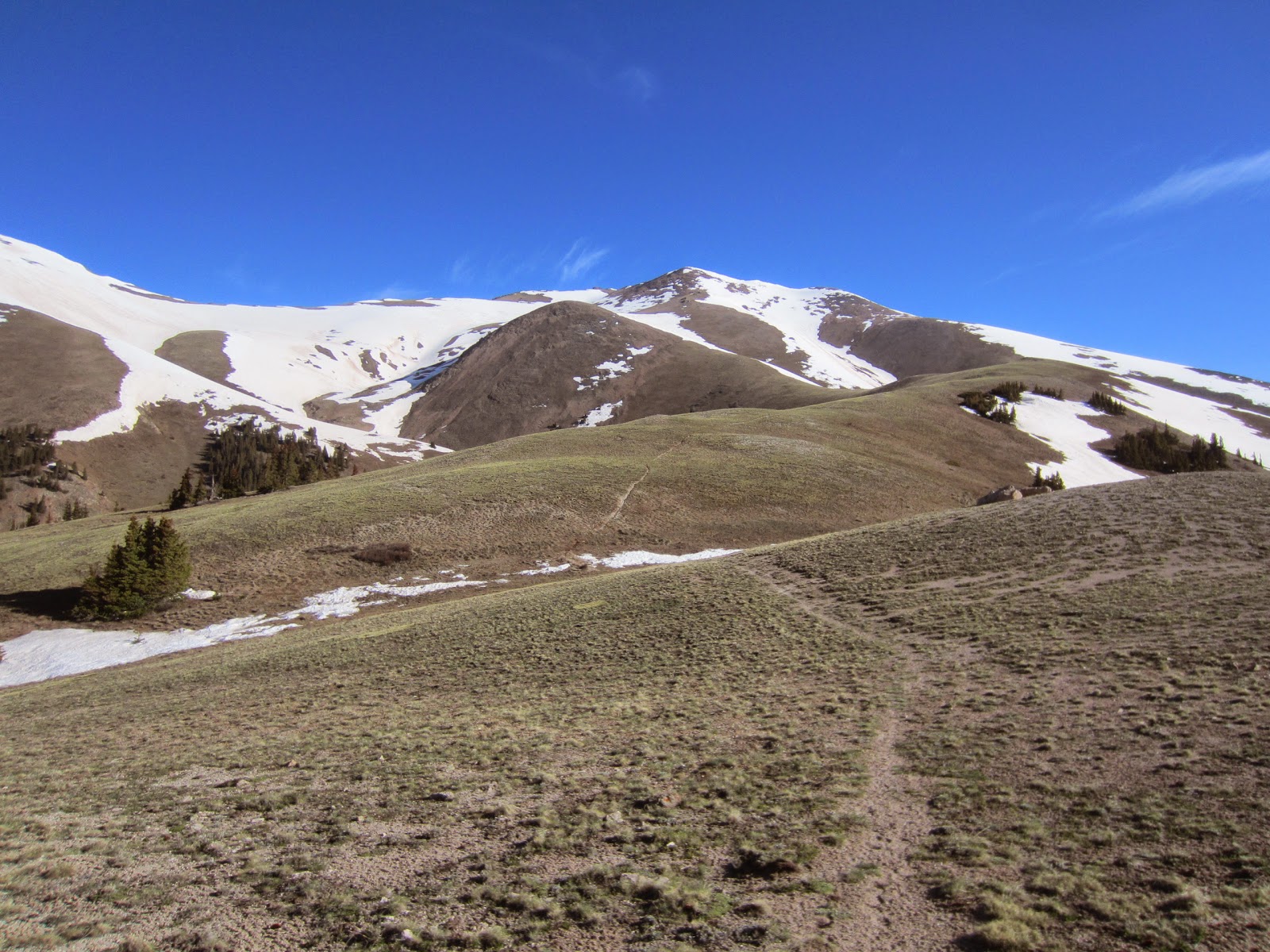 It seems like so long since I have been down to the San Juans, perhaps 5 or 6 years when Homie, Sierra and I went on a couple day peak bender.  It was refreshing to see so many peaks I have not climbed or even know the names of.  Being in Lake City also got me fired up to run the SJS next year, something that has always been on my list, having even registered once but had to bail on due to injury.

Post hike/run, we had a great day taking the girls on a hike and ghost town tour, which they absolutely loved.  They are eager to get up the big peaks too, so there will be much more of this to come. 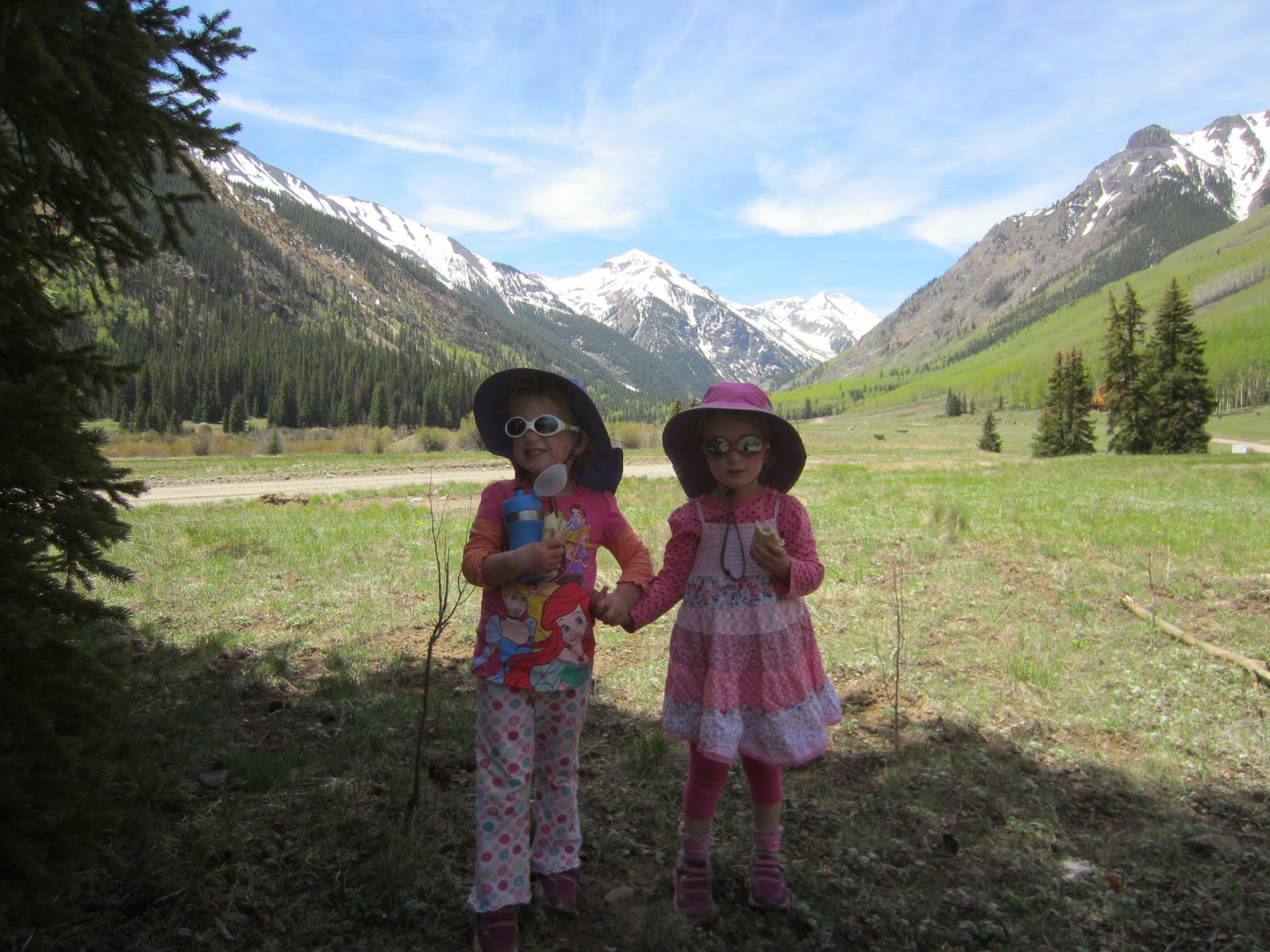 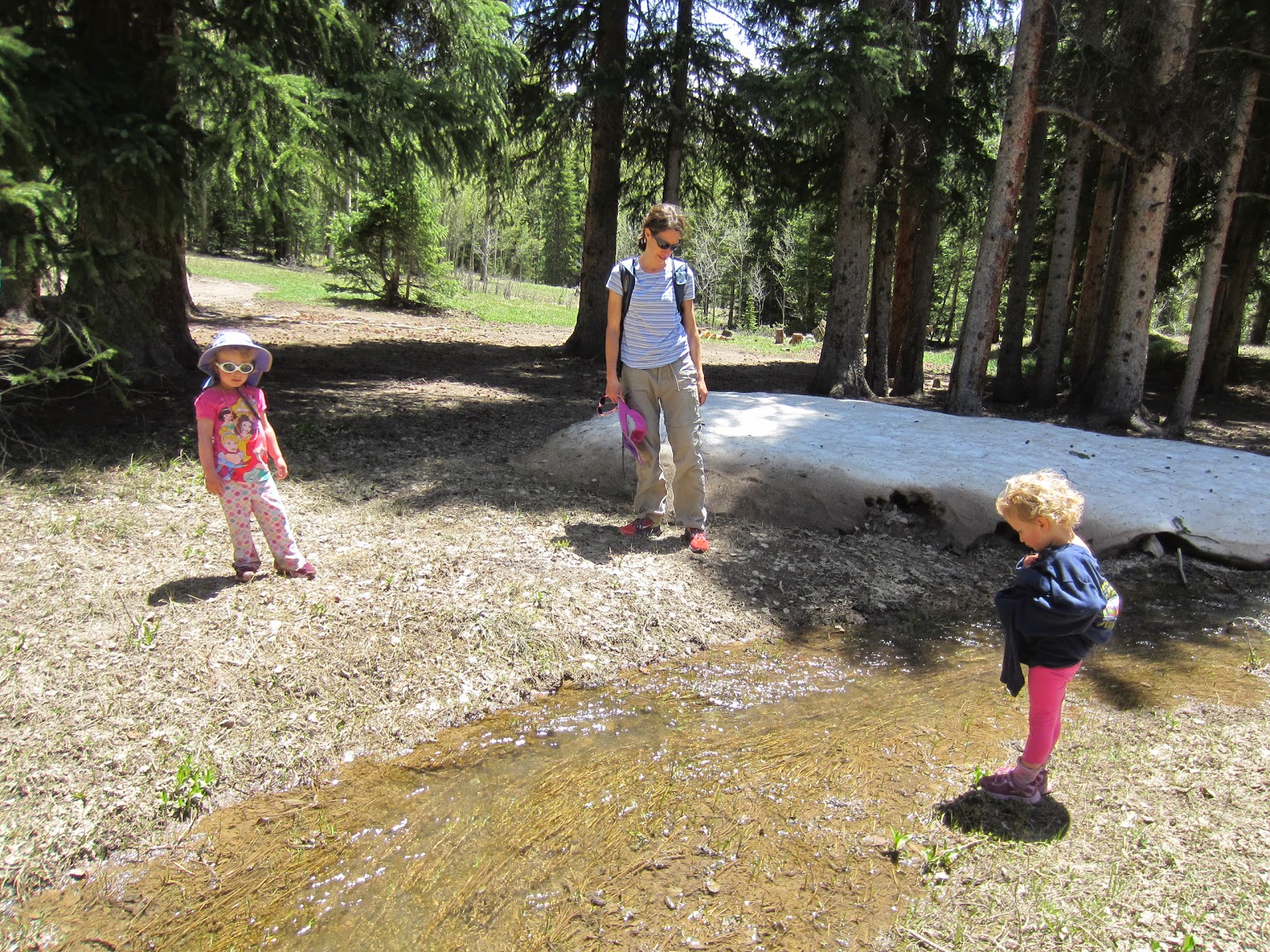 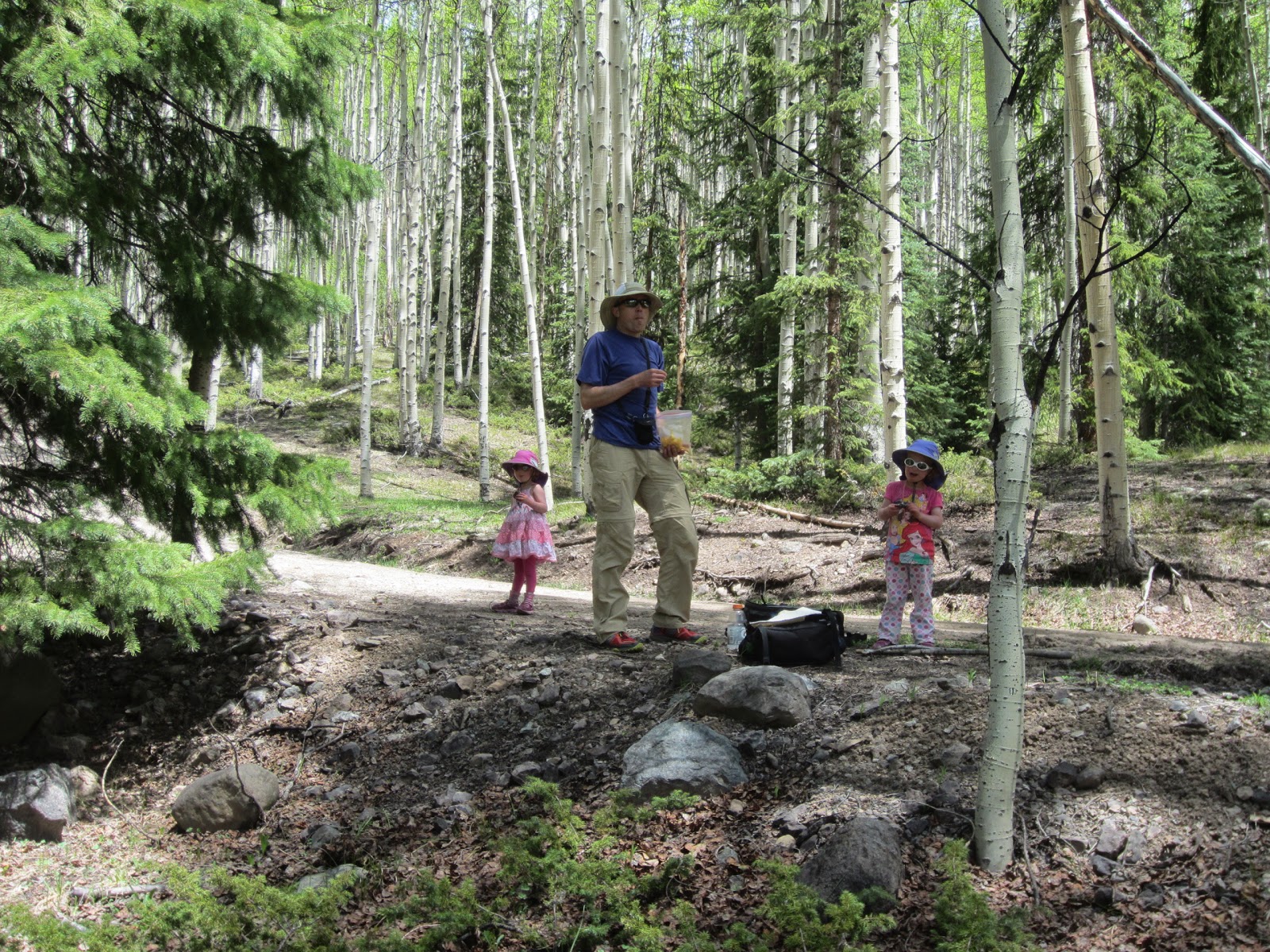 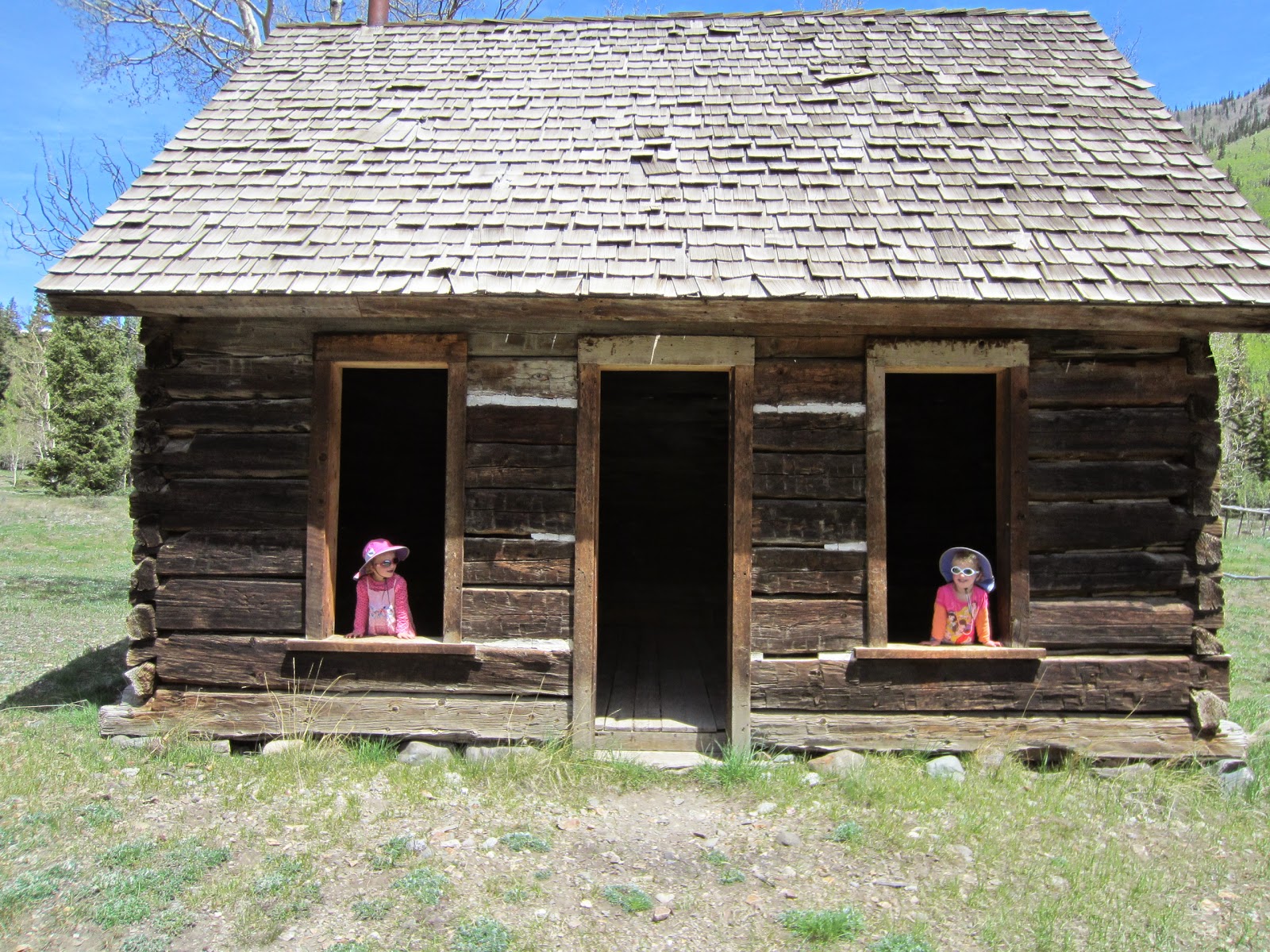 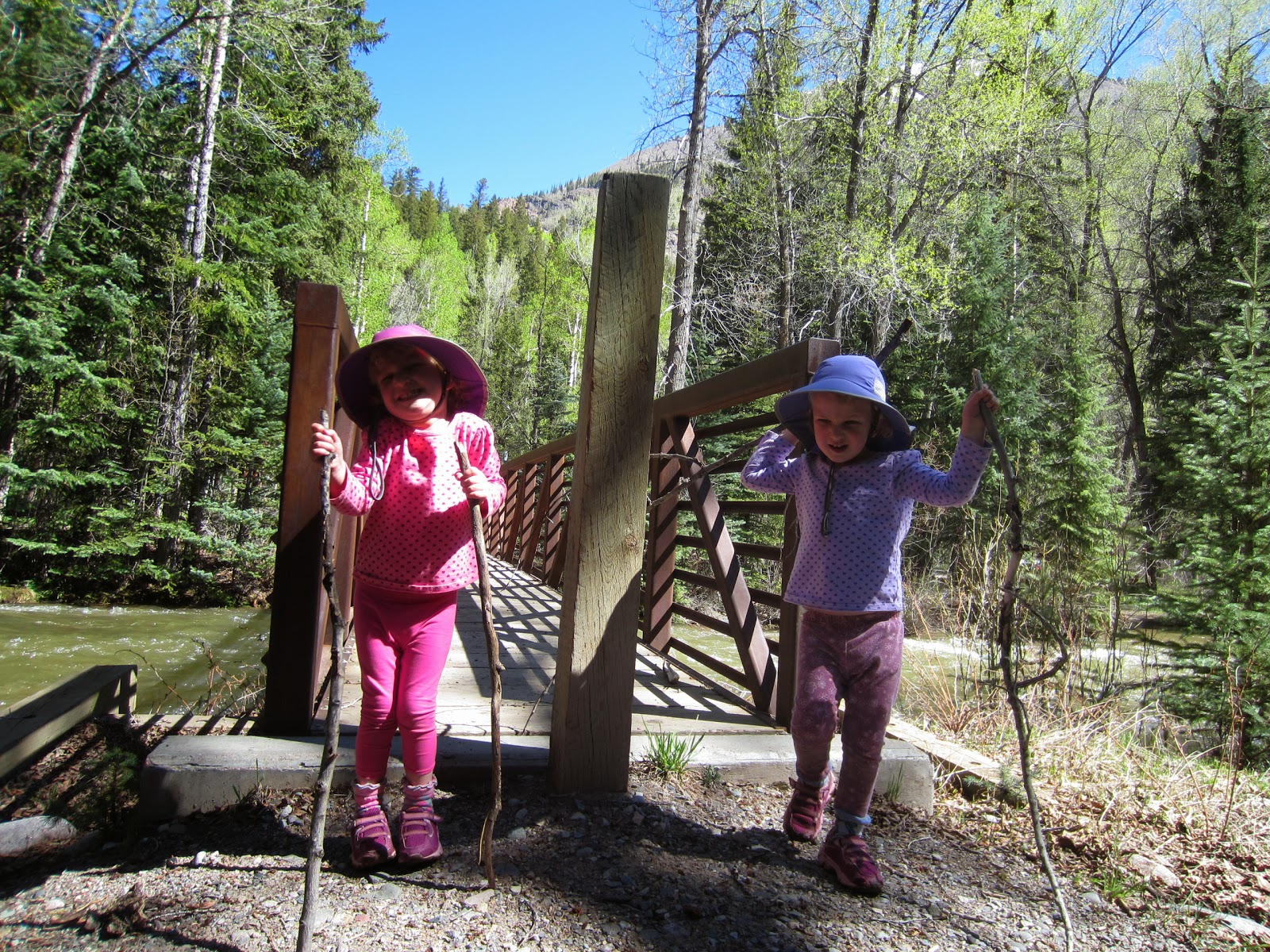 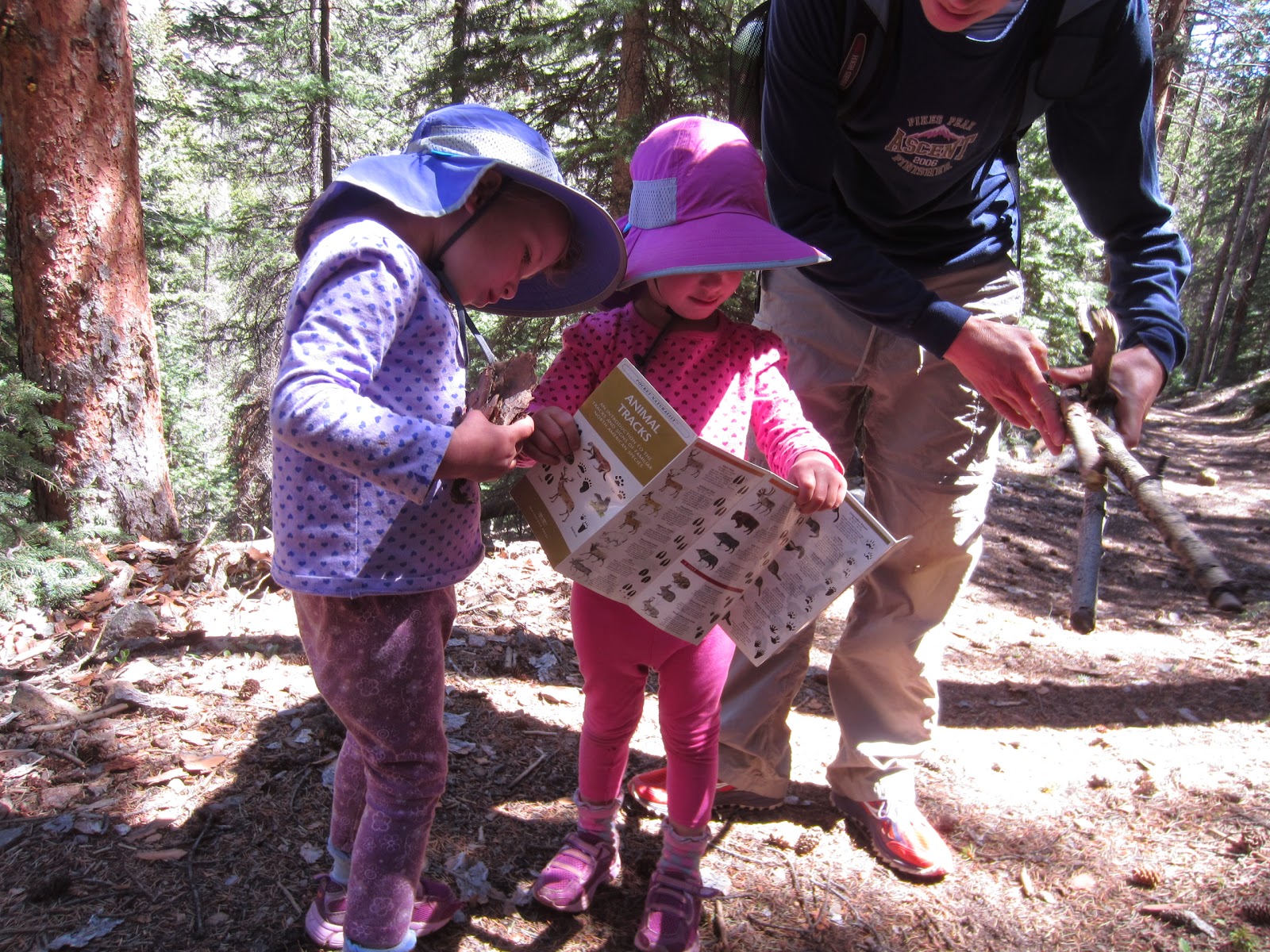 Posted by Jeff Valliere at 8:52 AM