Snuck in a 6.2 miler on the way home on the Coal Creek path, as it was that or nothing.  Mentally I had hopes of clicking off some low 6 minute miles with the new Garmin 305, but I quickly learned that a new watch does not make you run this stuff like Justin, George or Lucho.  With no warm up, I started pushing a little right off the bat and my knees kind of hurt (from recent downhilling I think?), connective tissue in my lower right leg was feeling sore, I had some phantom pain in my left hip and of course my right achilles was acting up, more so than it had in a while.  ~6:45-ish pace felt really easy from a conditioning standpoint, but my aches and pains were really messing with my head and I was having a terrible time.  With each passing mile, my outlook and pace degraded and I was just forcing it, especially after I ran out of trail and found myself knick knacking along a road, an incomplete concrete path and then through a school bus parking area/pavement incineration factory.

After my lame run the day before, I was questioning taking more time off to bike, but the call of Green was too strong.  Short on time, I opted for the front side.  Oddly, my achilles felt great and I pushed a bit harder than I have been doing as of late, nothing gut busting, but a solid workout.  Took the descent pretty easy as my downhill conditioning/confidence is taking a while to come back.  This run just felt awesome in every way.

Also tested the Hoka Bondi B for the first time on a technical trail after trading e-mails with GZ and Justin the day before and am contemplating using them for the PPM as Dave has suggested.  They felt really light, accurate and solid on the up, much more so than the Mafate, but I question how stable they will be ripping downhill and if traction will be sufficient for the lower Barr Trail.  The verdict is still out, but they are in the running with the La Sportiva Crosslite 2.0 and the Montrail Rogue Racer.

Family day on Green.  I carried Isabelle, Allison carried Amelie and Sierra led the way.  Very easy up and down with lot's of stops and a long break on the summit.  The girls really seemed to enjoy it and the warmer weather felt great, made it feel very relaxed.  This was Amelie's first trip up Green and Isabelle's second (her first trip was back in January when it was snowy/icy).

In the afternoon, I mowed the lawn and wore the Garmin, .81 miles in 38 or so minutes.  My PR for this route is in the low 20's though (this was the first mow of the year and was slow with raking and picking up dog poop). 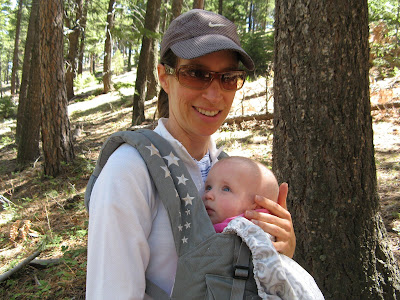 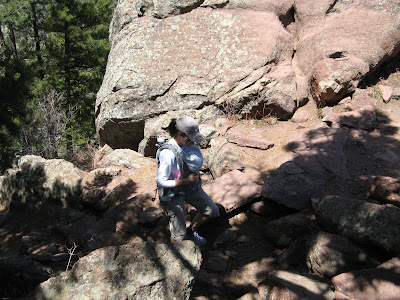 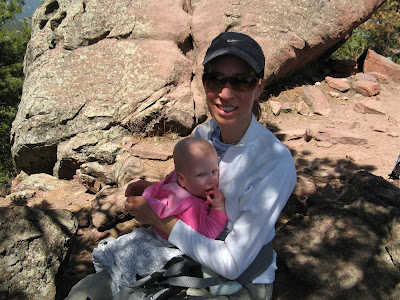 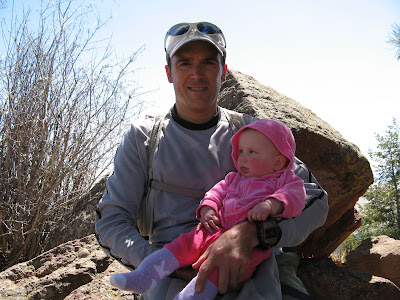 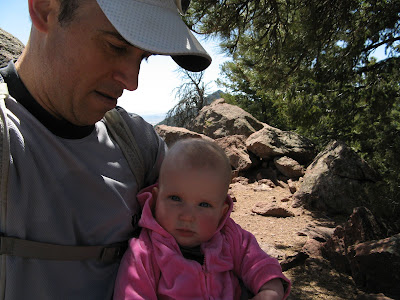 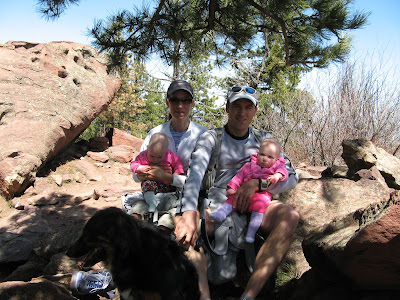 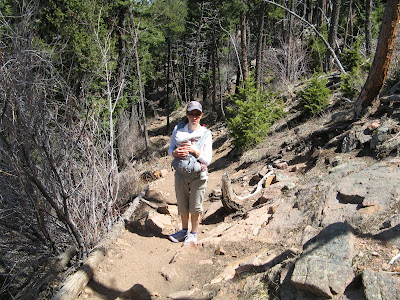 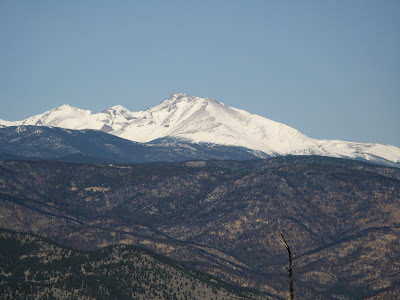 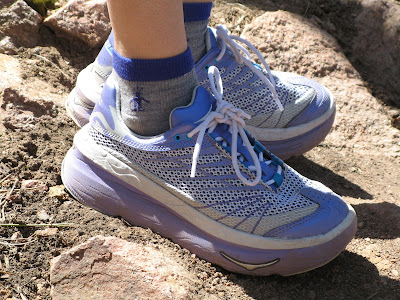 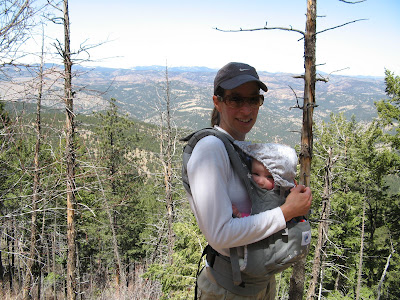 Still plenty of snow in the high country.﻿ 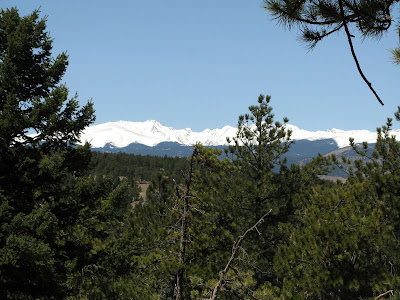 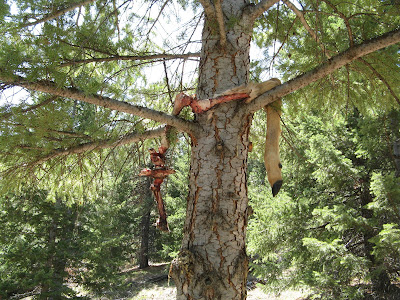 "Keep searching, we will eventually stumble upon something rare and endangered.  We can tweak our findings to prove that dogs and trail runners that pass within a mile, are threatening their very existence"﻿ 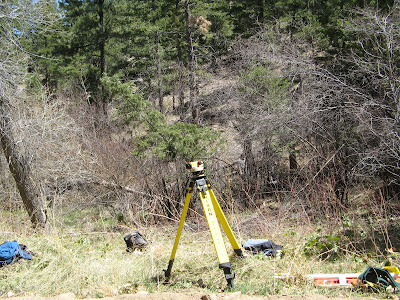 Soon I will be out there on the peaks looking like this..... 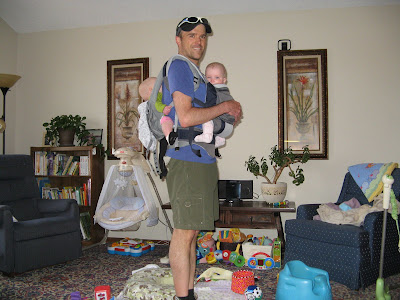 Friday, 05/06/11 Boulder Creek Path 7.43 miles/413 vert./1:00:22
I had to run an errand on Pearl St., so I brought the Chariot and we got in a nice run.  We went up the path until it ended, crossed Boulder Canyon and started up a steep dirt road, but turned around because of all the threatening private property signs.  Bummer, I was looking for more.  We then spent a little time on Pearl Street checking out the tulips which was fun.  The attention they get while out in busy public places can be a little overwhelming and a bit awkward.  I am flattered by the adoration, but by nature, I tend to prefer flying under the radar for the most part and just try to give a smile and a friendly nod, as we just can't stop and chat with everyone who takes interest.  "Are they Identical?"  Yes.  "Do they run in the family?" (code for "did you do IVF?") They do now (and no IVF).
Garmin Data 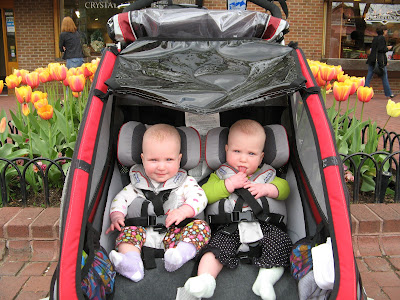 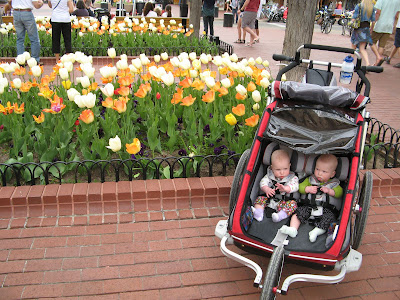 Saturday, 05/07/11 8.82 miles/3,552 vertical/2:05:28
Full of excuses.....
I was eager to get out and enjoy the warmth, but by the time I finally got out at almost 2pm, it seemed almost too hot.  I thought I felt decent and was motivated to run my Bear/SoBo/Green route from the previous week and lob a big chunk of time off, as I did not go particularly fast last time.  From Cragmoor, I headed up Bear which became a bit of a slog.  Although I thought I was moving well, my splits were indicating otherwise and I lost a bit of motivation and topped out on Bear in a lackluster 44 minutes.  I did not linger, as the summit was swarmed in little black flies (fortunately they do no bite, but were pesky regardless).  I was tentative downclimbing the West side cliffs, as I had sweat in my eyes and was pre-occupied with the bugs.  Once on the trail, I felt as though I had two left feet, compounded by the fact I was wearing an untested pair of shoes that I was reviewing that I don't think are that stable.
SoBo was even buggier than Bear, so I got out of there quickly, and again, I felt sloppy on the downhill.  I went ahead and tagged the true summit of Bear again just to make sure I did not miss Brandon, but as I started down the W. side I could see him working his way up the talus field.  We chatted and discussed options and ultimately headed down W. Ridge/Bear Canyon.  Again, I felt a bit uncoordinated and was not jiving with the shoes and I was hot, but not into my warm water.  Then my heel pads started to burn as they were becoming blistered.  Nice.  I'll give these shoes an F- (another pair from the same brand tore up the back of my heel two days prior).  At the Mesa Trail, Brandon went North and I headed South back to Cragmoor and alternated walking with light jogging as my feet/blisters were killing me.  By  the time I finished, I was glad to be done and glad I had skipped Green.
Garmin Data
This week was really up and down, some days really fun and somewhat confidence building and others had me questioning everything running related.
Posted by Jeff Valliere at 2:14 PM